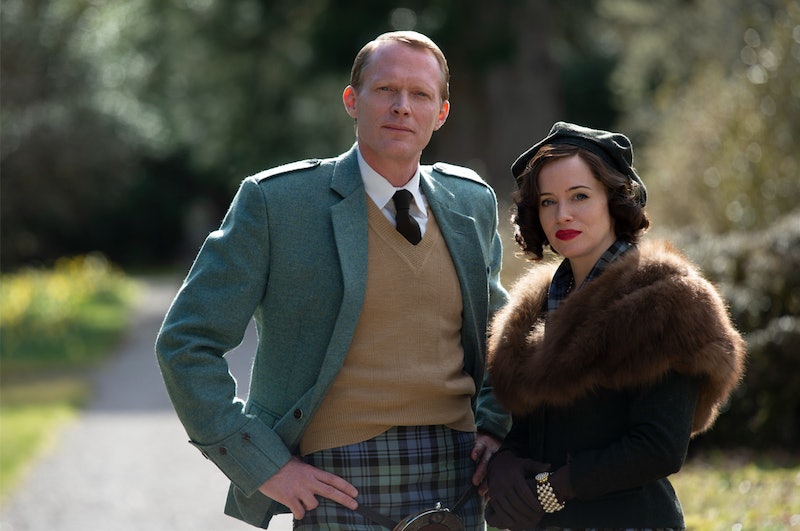 One of the most extraordinary legal cases of the 20th century is the subject of new BBC One drama A Very British Scandal. It’s the follow-up to Hugh Grant’s A Very English Scandal and will detail the infamous divorce of the Duke and Duchess of Argyll, played by Paul Bettany and Claire Foy, respectively. Written by Sarah Phelps, the three-part drama will attempt to turn the scandal “inside out.” Here’s everything you need to know about the latest version of A Very British Scandal.

According to BBC’s synopsis, “A Very British Scandal turns this scandal inside out in order to explore the social and political climate of post-war Britain, looking at attitudes towards women, and asking whether institutional misogyny was widespread at the time.”

The synopsis adds: “As her contemporaries, the press, and the judiciary sought to vilify her, Margaret kept her head held high with bravery and resilience, refusing to go quietly as she was betrayed by her friends and publicly shamed by a society that revelled in her fall from grace.”

Writer Sarah Phelps says she’s excited to get to work on this “extraordinary project.”

“Writing the story of Margaret’s life and the events leading up to and including her divorce from the Duke has been a passion project of mine since 1993 when I first heard her name and started learning about her,” said Phelps.

“I felt very strongly that she’d been punished for being a woman, for being visible, for refusing to back down, be a good girl and go quietly. This drama is my tribute to her.”

BBC has confirmed that filming will take place across the United Kingdom later this year. The three-part series will air on BBC One in the UK, and on Amazon Prime Video in the U.S., Canada, Australia, and New Zealand, but the airing date has not been confirmed, though it is said to be available “sometime” in 2022.

Back to her period drama best, The Crown actor Claire Foy will star as the charismatic Margaret, Duchess of Argyll. The duchesses’ high-profile divorce dominated the front pages for many months amid accusations of “forgery, theft, violence, drug-taking, secret recording, bribery, and an explicit polaroid picture.” WandaVision’s Paul Bettany will star opposite Foy as Ian Campbell, the 11th Duke of Argyll, as does Gavin & Stacey’s Julia Davis as Maureen, Marchioness of Dufferin and Ava.

On the new role, Foy said: “I’m so excited to work with Anne, Sarah and Paul on this extraordinary project, and to explore through this story, how often shame, judgement, and controversy surrounds a woman’s sexuality.”

There’s no trailer yet, but BBC One and Amazon Studios have released a bunch of first-look photos, featured here. While only including Foy, Bettany, and Davis, the pictures give an amazing glimpse into the glitz and glamour of the early 1960s.

More like this
Everything To Know About The 'Daisy Jones & The Six' TV Series
By Maxine Harrison and Brad Witter
'The Last Of Us' Has Officially Been Renewed For Season 2
By Darshita Goyal
These 5 Words In 'The Last Of Us' Ep 2 Have A *Major* Impact In The Future
By Sophie McEvoy
This Dark 'Happy Valley' Theory Is Staring You Right In The Face
By Sophie McEvoy
Get The Very Best Of Bustle/UK
Sign up for Bustle UK's twice-weekly newsletter, featuring the latest must-watch TV, moving personal stories, and expert advice on the hottest viral buys.