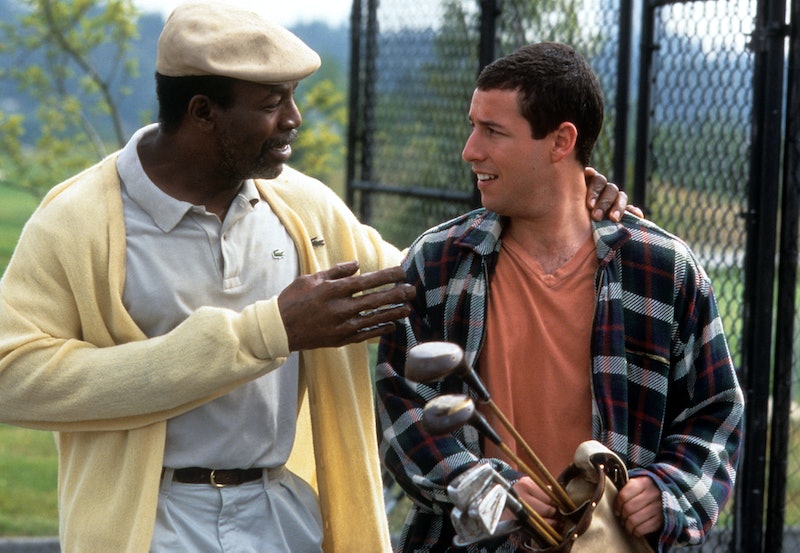 One of Adam Sandler's most quotable characters still knows his way around a golf course. On Tuesday, Feb. 16, Sandler honored Happy Gilmore's 25th anniversary by sharing a video of himself driving a golf ball off the tee just like the titular golfer. "Happy loves you all! Thanks for everything!" Sandler captioned his tribute on Twitter.

"OK, it’s been 25 years since I’ve done this. Let’s see what happens," Sandler, 54, warned at the top of the video. "I'm scared. Shooter McGavin, this is for you," he added, addressing Happy's arch-enemy in the movie, played by Christopher McDonald. "I'm not lying to you. That is smashed. Smashed. That went pretty well. You're dead, Shooter," Sandler said after taking the swing.

A pair of Sandler's costars in the 1996 comedy reacted to his shoutout. McDonald, who still retains the Twitter handle @ShooterMcGavin_, posted his own video response in character. "Nice drive, Gilmore. Twenty-five years, huh? Let’s see if it’s Shooter’s tour. Check it out,” he teased before aiming a putt into a makeshift cup in his home. McDonald, 66, also thanked fans of the film and Sandler before asking, "Why don’t you just meet me at the ninth green at 9, Gilmore?"

Ben Stiller, who appears in Happy Gilmore as an orderly who cares for Gilmore's grandmother at a nursing home, commented on Sandler's video directly. "That’s a beautiful swing Mr. Gilmore," he wrote. "Congrats on your anniversary, and being such a loving grandson. So happy to be a small part of taking good care of her during her 'golden years.'"

Those aren't the only stars of the movie who are reminiscing. Julie Bowen, who played Gilmore's love interest Virginia Venit, recently reflected on the anniversary. "I cherish, and I love that it has become this weird, internationally beloved thing," she told People. "Doing an Adam movie isn't pressure. It's fun, and it's like going home. He puts everybody's comfort and ease first and foremost and wants everybody to be happy to be there. There's no stress, no yelling and screaming. It's just a really pleasant place to be."

More like this
The 'Scream 6' Trailer Shows Off Hayden Panettiere's Return & Ghostface In NYC
By Jack Irvin and Jake Viswanath
'Friends' Star Maggie Wheeler Offers Support To Matthew Perry After Reading His Memoir
By Alyssa Lapid
Anne Hathaway Shared A "Thrilling" 'Princess Diaries 3' Update
By Darshita Goyal
12 Years Ago, Austin Butler Manifested His Oscar Nom In This Disney Movie Scene
By Jake Viswanath
Get Even More From Bustle — Sign Up For The Newsletter
From hair trends to relationship advice, our daily newsletter has everything you need to sound like a person who’s on TikTok, even if you aren’t.