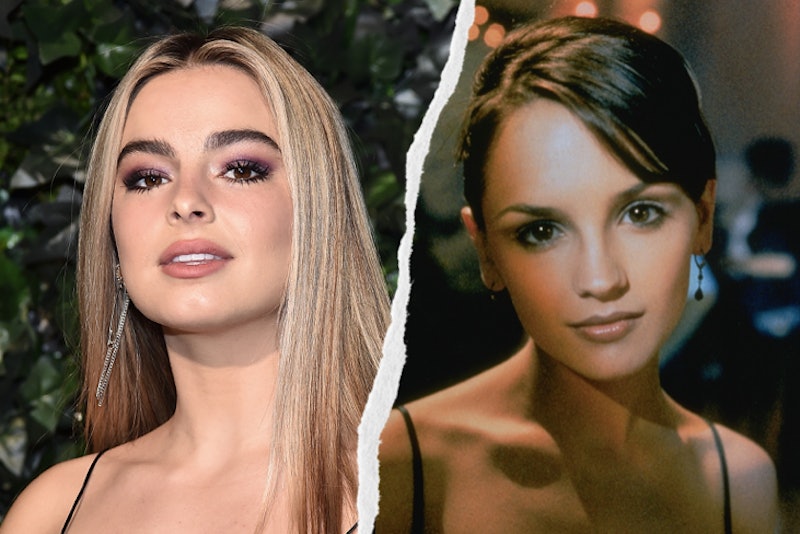 Freddie Prinze Jr. better look out, because Addison Rae Easterling is coming for one of his most iconic roles. TikTok star and Kourtney Kardashian BFF Addison Rae is starring in a She's All That remake. And she's not looking to be the next Rachel Leigh Cook.

The remake, titled He's All That, will be an updated, gender-swapped take on the original 1999 teen rom-com. Easterling will play Zackary Siler, a new kind of high school royalty inspired by Prinze Jr.'s jock heartthrob Zack Siler. Instead of a jock who's too cool for school, Zackary will be an influencer who is humiliated by her boyfriend in front of the entire school, and decides to get even by turning "the school's biggest loser" into the next prom king, per a press release obtained by Bustle. The movie will be told from her perspective, and there's no word yet on who will play the male version of Laney Boggs (Cook's nerd character).

This will be Easterling's first acting role, but she's already a household name thanks to TikTok, where she has 60 million followers and counting. Not only that, but her TikTok videos have given her plenty of opportunity to test out her acting skills. In fact, some of her videos give a pretty good idea as to what she can bring to a She's All That reboot. Here are just a few of her 1,153 videos that show she's a perfect fit for He's All That.

She Makes A Good Jock

Easterling proved she can pull off the jock look in this video featuring fellow TikToker Bryce Hall, her rumored on-and-off boyfriend. Yes, her new character will be an influencer, but you can't deny, it's a good look.

If He's All That follows the She's All That formula, then Easterling is going to have convince an unpopular boy that she's really, really into him, which means she'll need to sell the pick-up lines as if her life depended on it. This particular video is a good a place to start.

There is no She's All That without the DJ played by one Usher Raymond IV. Who better to pick up that mantle than Jason Derulo? He's already proven he can act — remember when he fooled the entire internet into thinking he'd really broken off his two front teeth?

She Can Act Two-Faced

This doesn't sound flattering, but if there's one thing we know about Zackary, it's that she's going to start off as a self-involved liar.

She's Ready For The Pool Scene

This isn't quite what the pool scene in She's All That (when the popular girls humiliate Laney) looks like, but, hey, it's close enough.

Easterling is constantly showing off her makeover skills — and her killer TikTok transitions — on social media. If anyone can turn someone from dud to stud, it's her.

This doesn't really relate to She's The Man in any way, but just think of the possibilities. Juggling as a special skill is sure to come in handy when trying to sweep a nerd off his feet.

She's All That had an iconic choreographed prom dance routine, and it would truly be a shame if He's All That didn't honor this teen movie tradition — especially with Easterling, who shot to fame thanks, in part, to her TikTok dances, as a lead.

Now all she has to do is record a cover of Sixpence None The Richer's "Kiss Me," and it's go time.