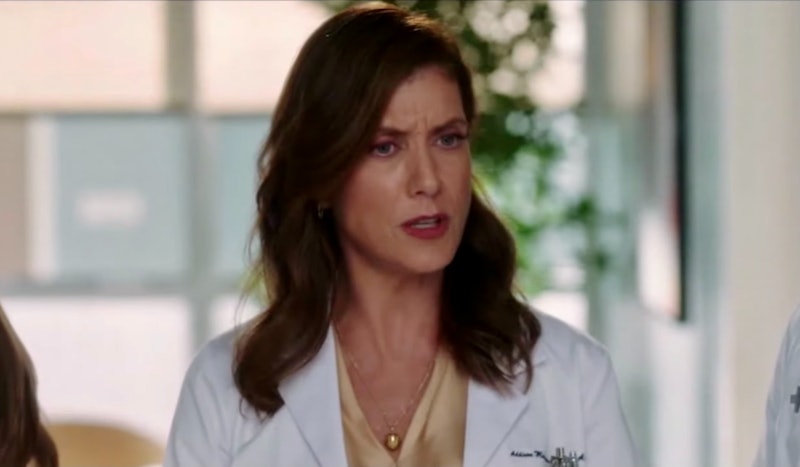 Spoilers ahead for Grey's Anatomy Season 18. Dr. Addison Montgomery is returning to Grey’s Anatomy the same way she arrived in Season 1. “You must be the group that’s been screwing up the program,” she says upon meeting the fledgling Grey Sloan residents in the first promo for her comeback episode. In the inaugural season, Addison greeted Meredith the same way: “And you must be the woman who’s been screwing my husband.”

Addison’s return to Grey’s, set to air in the Oct. 14 episode, will be part of Richard’s “big plans” to beef up the hospital’s intern program. As always, there will be some sort of complicating factor to heighten the drama. In this case, it’s the failure of Grey Sloan’s entire HVAC system while Addison is performing a long-awaited transplant surgery. But some things never change, and Addison refuses to stop operating — despite the threat of infection in the absence of air filtration. Instead, she races against the clock, also enlisting the help of the very woman who was, at one time, screwing her husband. “Get me Meredith Grey,” Addison instructs Richard in the preview clip.

“People will be surprised,” Kate Walsh, who plays Addison, teased to TV Guide of the unlikely pairing, adding that there will be “twists and turns” between the two women. “Like vintage Grey’s, you will laugh and then you’ll cry,” she said.

While previewing new Addison photos on social media, Walsh also revealed that Chandra Wilson, who plays Miranda Bailey, directed her first episode back. “I’m so ridiculously excited for you all to see Addison’s return,” she tweeted on Oct. 7, adding that “this was a very moving experience ... for so many reasons, not the least of which was being reunited with my former cast mates, crew members & writers.”

Indeed, after Walsh announced the news in a Sept. 2 TikTok video, Ellen Pompeo (aka Dr. Meredith Grey) told People about their emotional reunion. “Kate’s so fun!” Pompeo told the magazine. “She moved to Australia, so I really haven’t seen her or hung out with her. I have so much affection and love for the original cast. We all went through something that only we can understand. So it’s always just really fun and very emotional, to be honest. When any of the original cast members get together, we always start crying, and we’re like, ‘Why are we crying?’”

Plan on having your tissues handy, too.

More like this
'GoT' Star Emilia Clarke Says She "Just Can't" Watch 'House Of The Dragon'
By Brad Witter
Everything To Know About 'RHONJ' Season 13
By Brad Witter and Jake Viswanath
Here’s Why Danny Masterson’s Hyde Isn’t In 'That '90s Show'
By Brad Witter
The OG Power Rangers Are Returning For A Spandex-Clad Special
By El Hunt
Get Even More From Bustle — Sign Up For The Newsletter
From hair trends to relationship advice, our daily newsletter has everything you need to sound like a person who’s on TikTok, even if you aren’t.