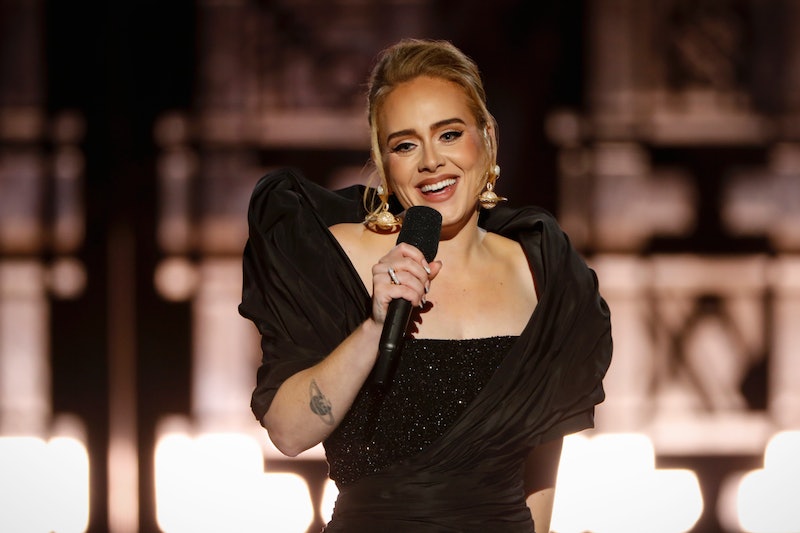 Canceling shows was not how Adele wanted to kick off her Las Vegas residency, but given the circumstances, it had to happen. Fans were understandably devastated when the singer made the official announcement to postpone “Weekends With Adele” in a tear-filled video on Jan. 20, especially those who had already traveled to Las Vegas for opening night on Jan. 21. All was not lost, though — the beloved musician pulled out all the stops to try to make it up to them.

Some of the show’s ticket holders were delighted to find personal messages from Adele in their inboxes, as Vulture reports. One fan, TikTok user jamesmasonfox, showed it off in a video on the platform. The “Oh My God” singer’s DM started with an apology and then went on to extend an invitation to the Adele store at the show’s venue, The Colosseum at Caesars Palace. She promised a chance to see “nostalgic things” from her career, as well as to hear more from her team and receive a gift. What the fan seemed most thrilled by, however, was the fact that the message was actually from Adele herself. After James asked if it was “really mama Adele,” the response was a voice note, with Adele saying, “Yes, it is! It’s me.”

Other fans showed what happened at the store, and it looks like it was worth the trip. Adele FaceTimed with the group, again letting them know how sorry she was that the show didn’t go on as planned. They let her know they still loved her, chanting, “It’s OK!” in a TikTok posted by user _alyssayung_. In another video, Alyssa showed off the Adele swag that she said was gifted to the group: a shirt, a keychain, and a koozie, as well as what appeared to be magnets and a tote bag.

And that still wasn’t the end of it. Other videos showed fans FaceTiming with Adele in more intimate conversations, including the one posted by user katherinestokoe. The TikTok features Adele speaking with a small group of fans and telling them that she’s “really gutted” and will be doing “free meet-and-greets” for rescheduled shows.

Fans seemingly made the best of the situation. Yet another TikTok shows a large group gathered outside the venue, belting out “Rolling in the Deep,” even without Adele. On top of that, the fan footage shows peoples being extremely understanding of the postponement and kindly accepting Adele’s profuse apologies. The 15-time Grammy winner was clearly grateful, and she tweeted as much that evening.

“I have the best fans in the world!” she wrote. “Your graciousness and love tonight is overwhelming! Thank you.”

As Adele explained in her cancellation announcement, she and her team had tried to get ready in time for her residency to begin as scheduled, but they faced numerous setbacks. “We’ve tried absolutely everything that we can to pull it together in time and for it to be good enough for you, but we’ve been absolutely destroyed by delivery delays and COVID,” she said in part. “Half my crew, half my team are down with COVID — they still are — and it’s been impossible to finish the show. … We’ve run out of time.”

All of the dates are going to be rescheduled, so hopefully all of the original ticket holders will eventually get the chance to see “Weekends With Adele.”

More like this
Twitter Can’t Believe The Madonna Biopic Is Scrapped & Fans Have A Solution
By Alyssa Lapid
Adele Is Attending The 2023 Grammys, Thank You Very Much
By Jake Viswanath
Beyoncé Just Announced Tour Dates: Here's How To Cuff Tickets To Her 2023 Shows
By Jake Viswanath
Watch The Sweet Moment Adele Stopped Her Vegas Concert To Kiss Her Son
By Sophie McEvoy
Get Even More From Bustle — Sign Up For The Newsletter
From hair trends to relationship advice, our daily newsletter has everything you need to sound like a person who’s on TikTok, even if you aren’t.