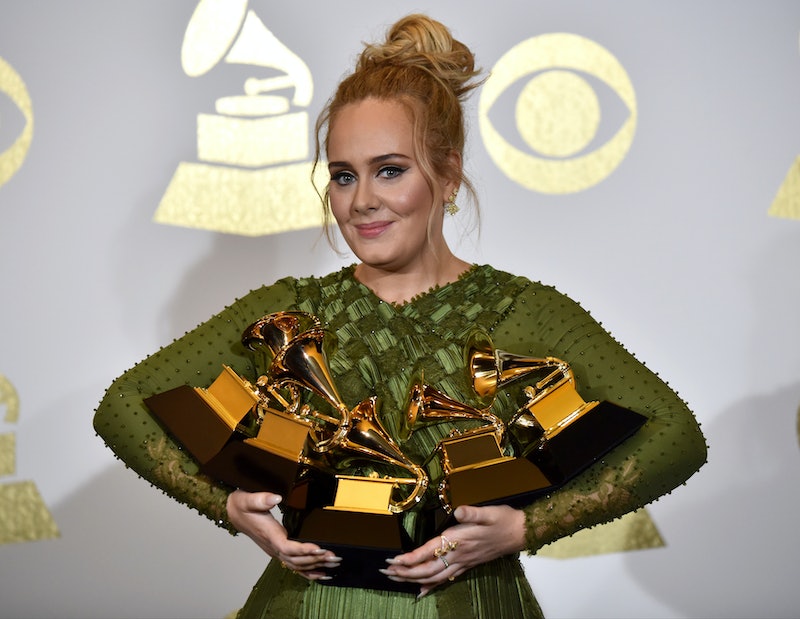 On Oct. 5, Adele surprised her followers with a teaser clip from a music video for her new song “Easy on Me.” Four days later, she followed it up with a 45-minute snippet, including some actual vocals and lyrics.

The first teaser is a black-and-white clip that is less than a minute long and shows the singer inside a car, listening to a tape of her new track, surrounded by sheets of music. In the first few seconds, the singer gives a look to the camera through her rear-view mirror, showing off her signature cat-eye makeup.

The caption for the clip revealed that fans can expect the new song on Oct. 15 this year, which caused fan celebration. The comments section was soon flooded with excitement and adoration, including from famous names such as Beanie Feldstein. “CHILLS CRYING CHILLS,” the Booksmart actor wrote.

Adele’s snippet on Oct. 9, on the other hand, came during an Instagram Live in which the singer played a portion of the song. Again fans were buzzing, and they almost immediately began tweeting about how emotional the ballad made them. Lyrics included her singing:

There ain’t no gold in the river / that I’ve been washing my hands in forever / I know there is hope in these waters / But I can’t bring myself to swim when I am drowning / Go easy..

In her latest Instagram post, Adele confirmed the exact time fans will be able to listen to single in full for the first time: “October 15” (which we already knew ) and the all-important time, “Midnight UK” (7 p.m. ET.) The post was accompanied by a black-and-white profile portrait of the singer.

The surprise announcements arrived just days after Adele updated her website and social media accounts. The “Hello” hitmaker changed her Twitter and Instagram images to a blue and turquoise pattern, while the information on her old website was replaced simply with a “sign up” button.

Earlier in the week, the number 30 also mysteriously began appearing in some of the most prominent locations around the world, including the Eiffel Tower in Paris, the Colosseum in Rome, and New York City’s Empire State Building. Although not confirmed, it is rumoured Adele’s hotly anticipated fourth album will be titled 30, following the same tradition as her previous releases 19, 21, and 25, the titles of which refer to a significant year in the singer’s life.

Adele’s forthcoming new album will be her first since 2015’s 25, which went on to shift more than 3.5 million copies in the United Kingdom alone. The “Rolling in the Deep” performer has also enjoyed massive success worldwide with her previous three album releases, which have sold a combined total of 59.5 million copies.

Editor’s note: This article was updated to reflect incoming information about Adele’ Easy On Me.