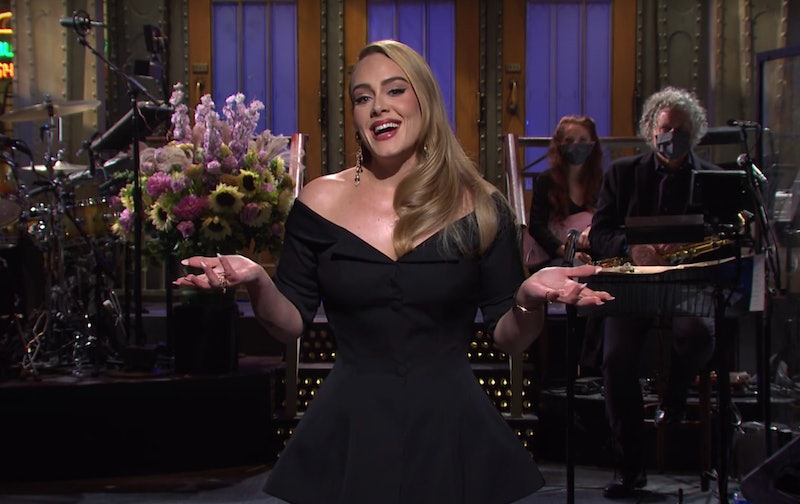 Years after making her Saturday Night Live debut as a performer, Adele returned to host the Oct. 24 episode. "My god, I'm absolute thrilled to be hosting this show," Adele said in her SNL monologue. "Not only do I genuinely love this show, but [it's] the show that broke my career here in America."

Adele was the musical guest in 2008, when the real Sarah Palin guest-starred alongside her impersonator Tina Fey. "A few million people tuned in to watch it, and the rest is now history. Now I don't know anything about American politics — I mean, I'm British," she joked. "Sarah Palin, babes, thanks for everything."

Adele also revealed why she didn't want to be both the host and musical guest. “My album is not yet finished," she admitted, and the idea of playing both roles was daunting. "I’d rather put on some wigs, have a glass of wine or six, and just see what happens," she laughed.

Adele went on to address her weight loss, which has been the subject of recent media coverage and scrutiny. "I know I look really, really different since you last saw me. But actually, because of all the COVID restrictions and the travel bans, I had to travel light and I could only bring half of me. And this is the half I chose," she said to loud applause.

She also thanked the frontline healthcare workers sitting in the audience. "I want to say a genuine, sincere thank you to all the frontline workers down here in the audience," Adele said. "They say that once you've been to New York you keep a little piece of it in your heart forever, so I give it up to you." Per the New York Post, SNL offered tickets to healthcare workers for the Season 46 premiere, and based on Adele's comment that offer may have been extended.

Adele closed it out by wishing everyone well in these tough times. "We're going to be together for an hour and a half," she said. "I really, really hope you get as much joy out of this as we've had putting this together for you."