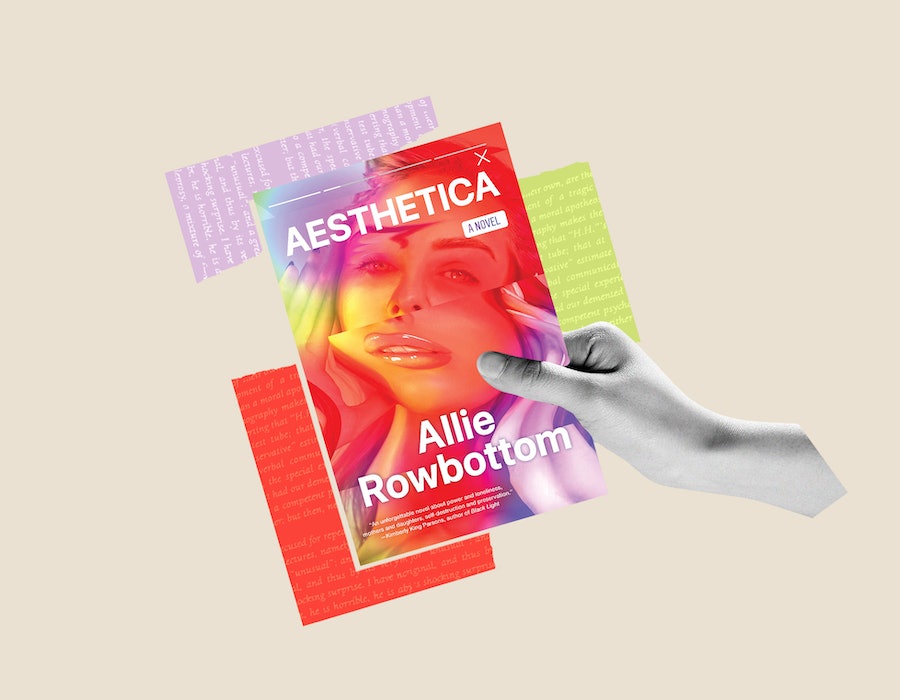 As Allie Rowbottom was editing her new novel, Aesthetica, her publisher issued a strange request. Their legal team was insisting that she create a fake Instagram. “I had to get the account so we weren't ripping anyone off without knowing it, if ‘Anna Wray’ was a real person,” Rowbottom tells Bustle, referring to the extremely online protagonist of her book. “Turns out she was a young girl in England trying to make it big on Instagram. So we changed the spelling from Wray to Wrey, and I got the handle.”

Rowbottom’s Anna Wrey is desperate to succeed on the platform. The book takes place in 2017, the height of Facetune and Instagram face’s popularity. Nineteen-year-old Anna has just moved to Los Angeles, where she meets a manager named Jake who lures her in with the promise of sponsors, followers, and likes. Though things seem to go well for Anna for a while — she gets a boob job, fillers, and the likes do start rolling in — the reader knows that she doesn’t become the next Chiara Ferragni. Because there’s a dual plot, set in the near-future, where a washed-up Anna elects to undergo Aesthetica: a procedure that will reverse all her past plastic surgeries.

Though the novel has been praised for its unfiltered take on our contemporary beauty standards — and in particular, the ways in which they’ve been exacerbated by platforms like Instagram — editors initially failed to grasp the nuance beneath the plot. “They would be like, and this is almost verbatim, ‘I just don't see how the body modification threads and the feminist threads [coalesce],’” she says. “They would read up until the point that Anna gets her first surgery and they would love it. Then they would be like, ‘This isn't for me.’”

But once Rowbottom found the right editor, she leaned in to the intersection of augmentation and feminism — both in the book itself and at its launch party, where her guests were treated to Botox. “Even before Aesthetica was acquired by a publisher, I felt frustrated that doing the ‘right thing’ as a woman writer in the lit world wasn’t getting me where I wanted to go,” she says of internalizing past criticms. “So with the Botox, it just felt like, why not? Since [playing the part] didn’t work, maybe I’ll just go bananas.”

Below, Rowbottom reflects on Joan Didion's Play It As It Lays, the merits of craft books, and bragging rights.

On the books she’s reading — new and old:

I think I had read The First Bad Man by Miranda July before, but it felt like the first time [this time]. I also recently finished Joan Didion's Play It As It Lays and A Cigarette Lit Backwards by Tea Hacic-Vlahovic, which is a lovely new novel.

On going back to basics:

I resisted craft books but my husband really pushed me toward them. It’s so helpful to just slow down and remind yourself [of the fundamentals] even if you already know them or think that you're above them. I really love The 90-Day Novel. In the back of the book there’s these structure questions that I use for short stories or sometimes for essays because they’re so functional. I also started reading this book called Self-Editing for Fiction Writers and it’s been really helpful.

On the dark side of her PhD program:

The first time I won a writing prize was a non-fiction prize and it was $5,000. I used the money to buy this writing desk, which is just a very basic metal desk that’s teal colored. It was in my PhD program and it was sort of sinister in some ways, because they would pit us against each other every year for these prizes.

On the power of bragging:

When I have a good writing day I get excited and I brag to my husband and my dogs. I've learned to get better at that, because often when I think that what I've written is genius and revelatory, it still needs a lot of work. But I brag.

More like this
Hailee Kaleem Wright's Topsy-Turvy Path From MTV To Broadway
By Samantha Leach
Annie Rauwerda Finds Treasure In The Depths Of Wikipedia
By Chloe Foussianes
At 28, Rosie Perez Risked Her Career To Stop Playing Stereotypes
By Gabrielle Bondi
At 28, Debra Jo Rupp Was Living A Much Different '70s Show
By Grace Wehniainen
Get Even More From Bustle — Sign Up For The Newsletter
From hair trends to relationship advice, our daily newsletter has everything you need to sound like a person who’s on TikTok, even if you aren’t.