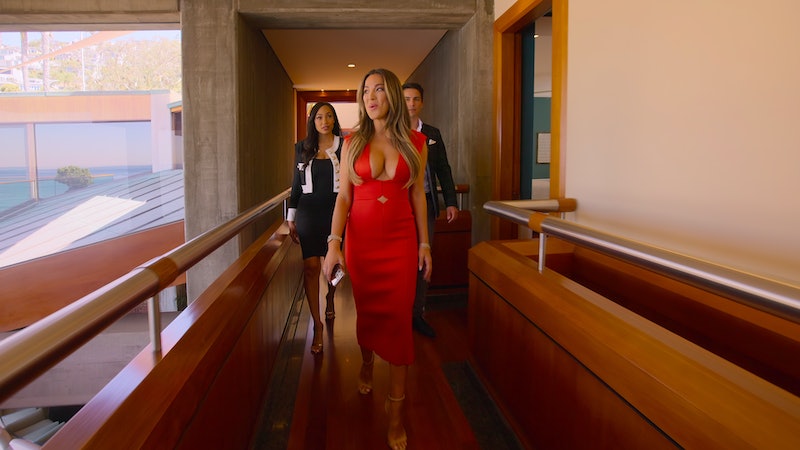 If Mary Fitzgerald helped introduce fans to The Oppenheim Group’s office drama in the Hollywood Hills on the first season of Netflix’s Selling Sunset, then consider Alex Hall to be the de facto narrator and protagonist of Selling The OC. The spinoff premiered on Netflix on August 24, and while it has much in common with the original — the glossy production stylings of Adam DiVello, the outrageous fashion, the multi-million dollar properties, and of course, the in-fighting amongst the agents — it’s a whole different beast.

While most of the Selling The OC agents are seasoned professionals, the O Group’s presence in the affluent Newport Beach area is so new that it forces the cast members to show their scrappier sides. The agents fight over who hustles the most as much as they do over the personal beefs during after-hours cocktails. More interestingly, the eight-episode first season follows both male and female agents in Orange County, as opposed to Selling Sunset, which solely focuses on female agents, despite the Beverly Hills O Group office employing a whole bunch of men. The mixed-gender cast lends itself to another kind of drama, and at the end of the season, Hall may or may not fall a little from the superwoman edit she got in the first handful of episodes — depending on whose side you’re on, of course.

Here’s everything you need to know about Alex to make the most informed decisions about which of Selling The OC’s three Alexandras is your favorite.

Hall’s first post on Instagram is a vacation pic with her mom and some other women in Israel from October 2021. Still, given she began filming Selling The OC just a month afterward, it’s likely that she scrubbed a lot of previous Instagram posts for the show. Most of her posts include other Selling The OC agents and promo for the show, with some videos about parenting peppered in. Considering that she is at the center of the Big Fight that drives the season, fans should definitely watch that space as she responds to the action.

At the end of her introduction package in Selling The OC, viewers see Hall, originally from Kentucky, gathering her two young boys into the car to drop them off at school before heading to the office to sell millions of dollars in real estate. In addition to her two sons, she has another toddler boy and a “pre-teen” daughter, as she describes in a cute Instagram video about how moody teens can be. While she leans into some mom-content on social media, Hall is otherwise pretty private about her kids on the show and their dad, who she is no longer with, as she appears to be fully single in the series.

Hall started as an interior designer but has been a licensed real estate agent since 2013, per her LinkedIn profile. Hall tells Bustle that when the Oppenheim brothers moved into their Corona del Mar office in Newport Beach, it caused a “ruckus” in the real estate world. The brothers had recruited an unnamed agent with whom she had previously worked, and Hall says she was “intrigued.” So when she got in touch with the brothers about a job, she also received a call from the show’s producers.

Hall adds, “It seemed like every direction I looked was pointing me toward the Oppenheim Group. And then I spoke to Jason for about two hours before we ever met in person, and we just really, really, really hit it off. That, in conjunction with the show, it was a no-brainer [to join the team and the cast].” In a previous interview with People, Hall also admitted that during that two-hour call, she was initially hesitant to sign on but ultimately, Jason convinced her that it would be “stupid” to not come onto the team.

More like this
'The Crown' Season 6 Has Suspended Filming "Out Of Respect" For The Queen's Death
By Bustle Staff
'Bling Empire: New York’ Star Dorothy Wang Wants To Try 'The Simple Life'
By Alyssa Lapid
At 28, Debra Jo Rupp Was Living A Much Different '70s Show
By Grace Wehniainen
The Mysterious Gunther Corporation From 'Gunther’s Millions' Has Dissolved
By Brad Witter
Get Even More From Bustle — Sign Up For The Newsletter
From hair trends to relationship advice, our daily newsletter has everything you need to sound like a person who’s on TikTok, even if you aren’t.