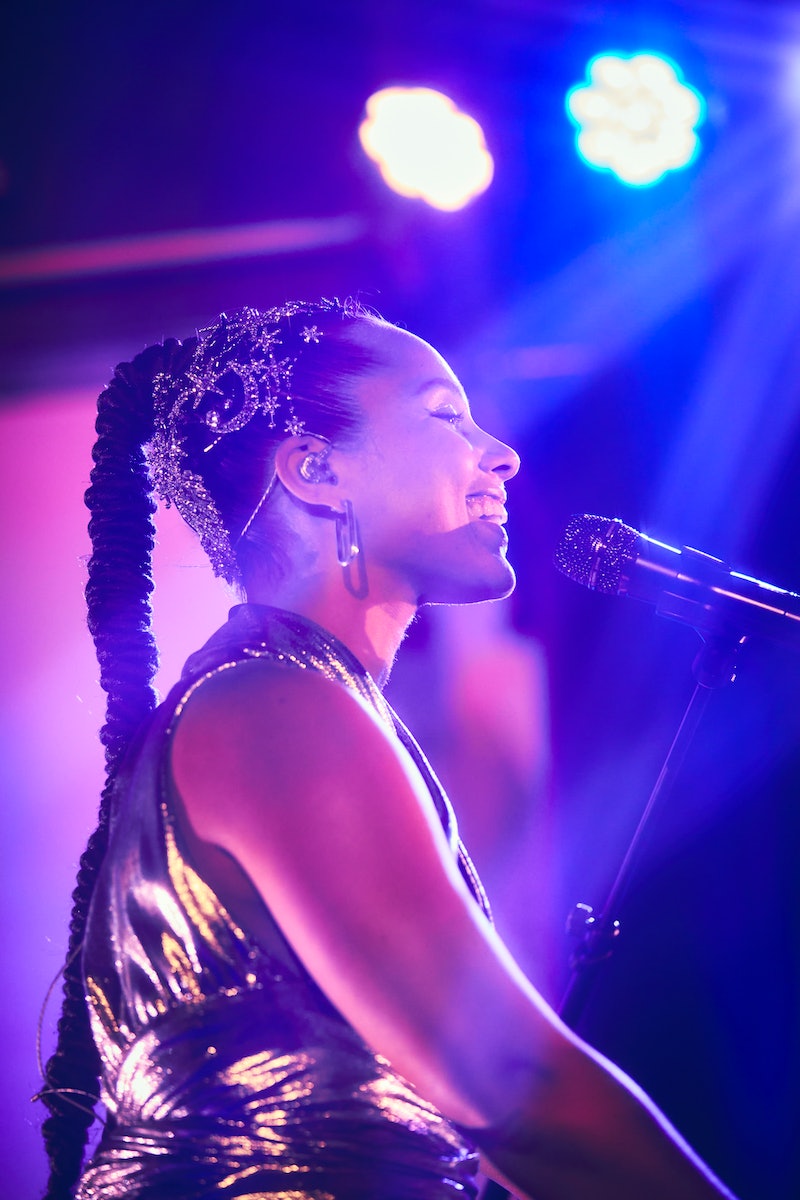 Alicia Keys kicked off Art Basel in Miami with an intimate show on Dec. 1 at Miami’s Superblue, a new art gallery that focuses on light installations and immersive art. The entire evening was a treat for Keys superfans, as the 15-time Grammy-winning singer-songwriter sang her hits and also gave a sneak peek of what’s to come on her new album, due out Dec. 10. She took the concert to the next level with immersive, artsy selfie-ready installations and a meditation and breathing exercise led by Keys herself.

Prior to the music performance, attendees could explore Superblue’s exhibits, which included “AKHU” by experiential art pioneer James Turrell. In another room, a work by Studio Drift featured mechanical flowers suspended from the ceiling, which opened and closed as if going through a blooming cycle. Before she took the stage, Keys led a guided meditation over speakers, incorporating these robotic flowers. She asked concertgoers to time their breathing to the opening and closing of the flowers, encouraging mindfulness and focus.

“Observe yourself being here and now,” said Keys, who recently launched the new beauty line Keys Soulcare in collaboration with e.l.f. Cosmetics. “Like the ocean is connecting all sea life, the air is connecting all life on land and in the sky. And while you are inhaling and exhaling we see the blue planet covered by sea and forest. There’s no breath you take alone.”

Keys had more offerings to give the crowd. When she finally took the stage — which was also artfully decorated with projected flower imagery, bright lights, and a grand piano Keys played for parts of the set list — she revealed she’d be singing some new material: three new songs from her upcoming album, Keys, titled “Skydive,” “Is It Insane,” and “Only You.” She teased different versions, some stripped-down, with just vocals and piano, and others more produced, featuring a track of additional beats and instruments. Keys sang “Is It Insane” in both styles and extended the participatory nature of the evening by asking the audience to weigh in on which they preferred. The crowd, unsurprisingly, went wild for both approaches.

When Keys comes out next week, produced by superproducer Mike WiLL Made-It, fans will have the opportunity to experience both takes on the new music. Two versions of the album will be released: one called “Original,” which will feature the more “laidback piano vibes,” as Keys described on TikTok, and one called “Unlocked,” which will feature the more “upbeat, drums, level-up vibes.”

In addition to teasing the new songs, Keys returned to some of her most well-known hits, like “No One,” “Empire State Of Mind,” and “Fallin’.” She played piano intermittently throughout, accompanied on stage by a drummer and musician playing the standup bass.

Between the meditation and the art, the entire evening had an air of collaboration and immersion. Prior to the show, Keys had posted the set list on Instagram and asked her followers to share which songs they’d like to see added. She’s been doing these small “secret” shows throughout the fall, including a homecoming performance at New York’s Apollo Theater last month. On Twitter, she posted an animated graphic about these “one night only” shows, teasing there are two more additional cities to be “unlocked.”

So depending on where you live, you could still catch Keys in one of these intimate, laid-back environments. She’s also set to do an official tour in 2022 to promote Keys.