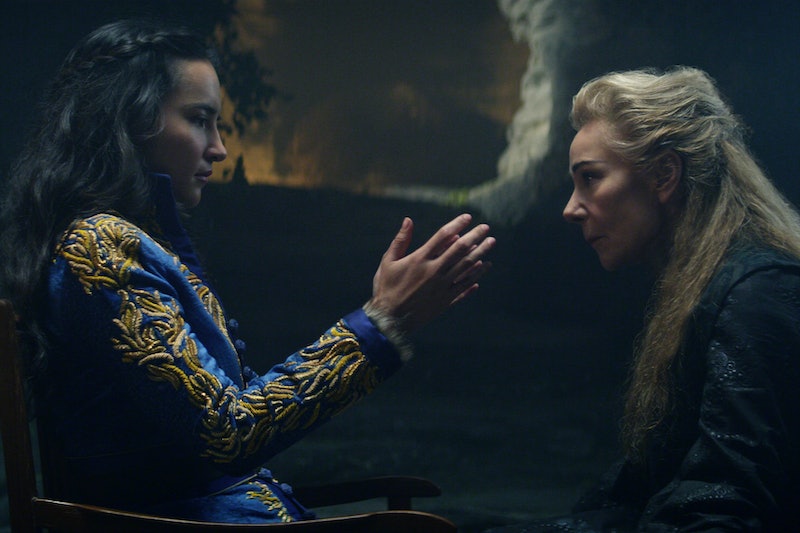 Fans of Leigh Bardugo’s Grishaverse books — the source material for Netflix’s new series Shadow and Bone — know all about Alina Starkov: the famed Sun Summoner whose Grisha powers might help Ravka destroy the Shadow Fold. But if you’ve only watched the Netflix adaptation, and still have questions about Alina’s powers in Shadow and Bone, keep scrolling. We’ve got everything you need to know about the Sun Summoner, right here. Major spoilers for Shadow and Bone follow.

Once discovered, Alina’s magical powers immediately stand out. In fact, she has more in common with the Darkling — the leader of Ravka’s Second Army, the country’s Grisha-only force — than any other person she meets. He’s a Shadow Summoner, able to control the darkness, she’s a Sun Summoner who can harness the powers of light, and each of them is believed to be the only Grisha of their kind.

Alina and the Darkling’s powers tie them to the Shadow Fold, both literally and in the minds of the Ravkan court. The Fold is a stretch of pure darkness, which Ravkans must regularly cross to engage in trade — despite of the hordes of dreadful creatures who live there. Everyone believes that Alina, as the Sun Summoner, can destroy the Fold for good... but the Darkling has other plans for her. Below, all the ins and outs of Alina’s unique powers.

What Do Alina’s Powers Allow Her To Do?

Grisha magic — known as “small science” — involves manipulating existing matter. Squallers “create” wind by changing air pressure and flow, for example, and Heartrenders seize control of their targets’ internal organs and minds. Most Grisha do not create matter independently, however. Those who do are remarkably few in number, and pay dearly for practicing such dark and dangerous magic.

So when Alina uses her powers, she doesn’t create light. Instead, she moves and shapes it, changing its intensity and focus. As a Sun Summoner, Alina can also use the sun’s heat in her magical practice. Eventually, she learns to perform the Cut: a deadly move in the Darkling’s repertoire, which involves summoning light or shadow to form an attacking blade.

Why Is Alina So Important To The Darkling?

You’d be forgiven for thinking that the Darkling’s was drawn to Alina as a fellow outcast; they’re the only Sun and Shadow Summoners in Ravka, after all. He encourages Alina to train hard with Baghra to harness her powers, telling her that she is the key to destroying the Shadow Fold, once and for all. As the great-great-great-grandson of the Black Heretic — the Grisha who opened the Fold, 400 years before the events of Shadow and Bone — the Darkling feels compelled to fix his ancestor’s mistake and unite Ravka again.

Alina later learns from Baghra that everything the Darkling has told her is a lie. He’s not the Black Heretic’s descendant, and he doesn’t want to close the Shadow Fold. Instead, he is the Black Heretic, has been alive for hundreds of years, and intends to use Alina’s powers to kill the volcra — man-eating monsters who live in the Fold. With the volcra dead, the Darkling can take full control of the dark wasteland and make it into his own, massive weapon, which he plans to unleash on anyone who refuses to kneel before him.

Is Alina Really The Only Sun Summoner?

Yes, at least throughout most of the Shadow and Bone trilogy. At the end of Ruin and Rising, however, Alina’s powers are amplified so much that they transfer to others, creating Sun Summoners near and far, and leaving her free to live a non-magical life in a peaceful Ravka.

More like this
Netflix Shut Down 'Bridgerton' S3 Rumours About A “Very Dark” Storyline
By Bustle
'RHOSLC' Star Jen Shah Refuses To Do A Post-Sentencing Interview With Andy Cohen
By Brad Witter and Jake Viswanath
Anne Hathaway Shared A "Thrilling" 'Princess Diaries 3' Update
By Darshita Goyal
Bill & Frank’s 'The Last Of Us' Episode Has Twitter Emotionally Wrecked
By Alyssa Lapid
Get Even More From Bustle — Sign Up For The Newsletter
From hair trends to relationship advice, our daily newsletter has everything you need to sound like a person who’s on TikTok, even if you aren’t.