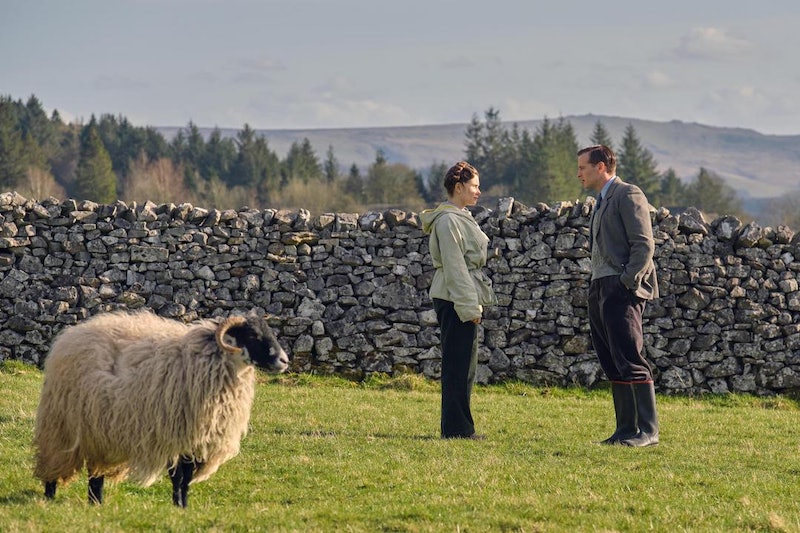 Channel 5 / All Creatures Great and Small

The creators of the ever-so wholesome country drama, All Creatures Great and Small, have released the first glimpses of filming for season two. The gentle Channel 5 show’s first series attracted a massive five million viewers, so a second outing for the show was never in doubt. With a few new faces in the cast and more questions about duty and love, here’s everything we know about season two of All Creatures Great and Small.

Like so many shows, the creators of All Creatures Great and Small had to adapt their filming schedule around COVID-19 pandemic restrictions. However, the Daily Mail wrote that the production of the series commenced earlier in 2021. While series one ended in Oct. 2020 ahead of the Christmas special on Dec. 22, the story will pick up just three months after series one left off.

When Will All Creatures Great & Small S2 Air?

Filming wrapped in Yorkshire a few months ago and the series is set to return “soon” with six episodes and a Christmas special, Channel 5 revealed in a statement sent to Bustle.

What Is The Plot Of All Creatures Great & Small S2?

All Creatures Great and Small is loosely based on a series of books written by veterinary surgeon Alf Wight. His pen name was James Herriot. The Radio Times writes that they serve as fiction-cum-memoirs and tells the stories of the animals he treated and the people he lived with in the Yorkshire Dales in the 1930s.

Series 1 ended as Helen (played by Rachel Shenton) called off her relationship with wealthy Hugh (played by Matthew Lewis) and fans were teased that she may finally admit her feelings for James (played by Nicholas Ralph.) However, there was no perfect conclusion and it’s left the storyline wide open for Season 2.

According to a synopsis published on Hello, the second instalment begins with Helen coming to terms with her decision and James is given a catch 22 of choosing between the people he cares for. “As Helen and James navigate their feelings for one another, Siegfried, Tristan, and Mrs Hall are also forced to consider their places in the world,” writes the publication, “while James must ultimately decide between duty and love.”

Who’s In The Cast Of All Creatures Great & Small S2?

The cast of All Creatures Great and Small appears to have remained broadly the same except for one crucial new addition. Patricia Hodge, star of Miranda and A Very British Scandal, will replace Diana Rigg as Mrs Pumphrey. Rigg died in Sept. 2020 and had played the fabulous Mrs Pumphrey for the whole of Season 1. The first images of Hodge in the role have been released and she’s slipped into the role perfectly, wearing a tweed jacket with her dog on her lap.

Nicholas Ralph has returned in the leading role as James Herriot. Anna Madeley and Callum Woodhouse have also returned to the show. Similarly, Samuel West, and Rachel Shenton will be in series two.

Is There A Trailer For All Creatures Great & Small S2?

Yes, and its second series is certainly shaping up to be as delightful as the first. The new trailer gives a little taster as to what James will be getting up to now he’s returned to the Dales, as well as introducing Patricia Hodge as Mrs Pumphrey for the first time.

There’s also an inkling of love in the air between James and Helen, as he confesses that he missed her during his time away. And yes, this exchange takes place in none other than a field full of sheep.

Speaking to Deadline about the success of the show, executive producer Colin Callender said, “Even before COVID, I felt the audience wanted the sort of show that you could watch and revel in and not be beaten up by. There was something about All Creatures Great and Small with its themes of community and family, harking back to a kinder, gentler world, compared to the divided, complex, and rather brutal one that we’re now living in.”

If you’re expecting hard-hitting stuff then you’re probably not going to find it in All Creatures Great and Small. However, if you’re dying to know whether James is willing to throw responsibilities and caution to the wind in the name of love then series two will air on Channel 5 in late 2021 or early 2022.

This article was originally published on Aug. 13, 2021