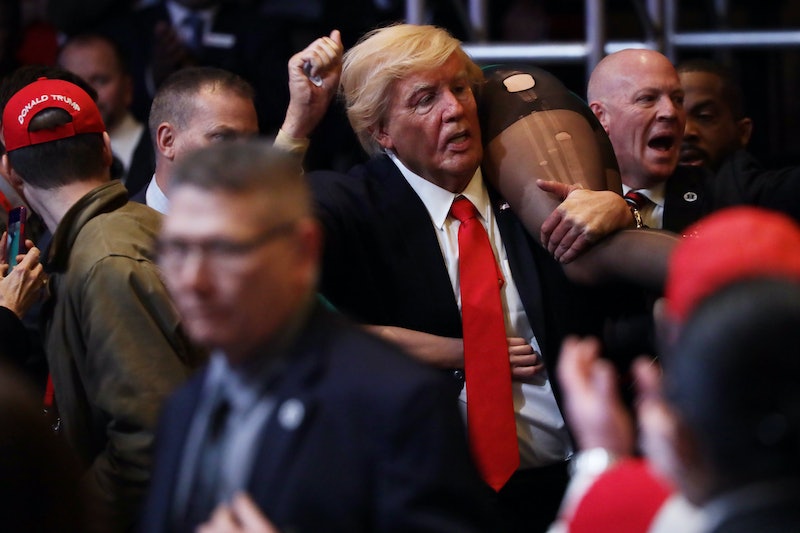 Borat is back. Sacha Baron Cohen is bringing back his faux-Kazakh journalist character for a brand new movie that's set to lampoon President Trump, the coronavirus pandemic, and every other absurd aspect of existence that 2020 has cursed us with. But he's not doing it alone. All the cameos in Borat 2 suggest that the sequel could be even more impactful than its predecessor.

In the new movie, the official title of which is Borat Subsequent Moviefilm: Delivery of Prodigious Bribe to American Regime for Make Benefit Once Glorious Nation of Kazakhstan, Borat returns to America after more than a decade away. But there's a problem. Given the original film's massive popularity, Borat is a celebrity here in the U.S. As a result, Cohen needed to get clever to perform the same sort of real-life hijinks in the sequel as he did in the original. To do so, the actor has Borat go incognito while disguised as other characters during some segments of the film. In others, it's Borat's daughter Tutar (Maria Bakalova) who acts as his surrogate. And while the original movie was light on celebrity cameos (it only featured Pamela Anderson and a handful of relatively small-time politicians), the sequel is aiming higher. That's because the plot revolves around Borat gifting his daughter to Vice President Mike Pence as a way to restore glory to Kazakstan after he disgraced the Central Asian nation in the first film.

Take a look below for all the cameos in Borat 2.

The Vice President appears during a scene in which Borat, disguised as Donald Trump, crashes Pence's speech at CPAC in February 2020. In the scene, Borat dressed as Trump makes his way through the crowd with Tutar over his shoulder, yelling to Pence that he brought him a girl. He is eventually drowned out by the crowd and escorted out of the building by security without interacting with Pence directly.

Donald Trump's personal lawyer was not as lucky as Pence. The former New York City mayor appears in an embarrassing and lengthy segment of the film, as he is interviewed by Tutar, believing that she is a representative from a right-wing news organization. In reality, Tutar is preparing to gift herself to Giuliani after being rebuffed by Pence. After their interview, which takes place in a hotel suite where they are the only two people present, Tutar asks Giuliani if he would like to join her in the bedroom for a drink. The pair then remove each other's microphones and Giuliani asks for Tutar's phone number and address as he touches the small of her back. He then lies back on the bed and puts his hands down the front of his pants, at which point Borat bursts in wearing lingerie. Borat says that Tutar is 15 and therefore too old for Giuliani, and he implores the lawyer to have sex with him instead, causing a confused Giuliani to spring up from the bed and rush out of the room.

Giuliani has since spoken out about his appearance in the film on Twitter: "The Borat video is a complete fabrication. I was tucking in my shirt after taking off the recording equipment. At no time before, during, or after the interview was I ever inappropriate. If Sacha Baron Cohen implies otherwise he is a stone-cold liar. In fact, the NY Post today reports 'it looks to me like an exaggeration through editing.' As soon as I realized it was a set up I called the police, which has been noted in THR article on July 8th. This is an effort to blunt my relentless exposure of the criminality and depravity of Joe Biden and his entire family. Deadline Hollywood reports CAA had a distribution screening in September where there was no mention of the scene holding any importance. We are preparing much bigger dumps off of the hard drive from hell, of which Joe Biden will be unable to defend or hide from. I have the receipts."

The late Holocaust survivor, to whom the film is dedicated, appears in a scene that her family isn't very happy about. According to Deadline, Dim Evans' estate sued Baron Cohen, claiming that she was duped into appearing in the movie and saying that the film mocks Jewish people and the Holocaust. Baron Cohen, who is Jewish, has countered that he, against his usual protocol, informed Dim Evans that his character was a satire of an anti-semite and that she knew the true purpose of the film, Deadline also reports.

This model and Instagram influencer appears in a segment of the film where she teaches Tutar how to ensnare older men. Billed as one of America's leading feminists by Borat, Chanel proves herself as anything but, telling Tutar that women should appear weak and submissive to appeal to men and setting up an extensive makeover for the supposedly-15-year-old. Since, Chanel's Facebook page has been taken down, her Instagram page has been scrubbed, and her website has been set to private. It's unclear if these actions are related to the film.

The biggest surprise cameo of the film, and the only major one that didn't receive news coverage weeks ahead of the film's release, is everyone's favorite Hollywood actor. Hanks appears briefly during a montage where it's shown that Borat, as patient-zero, unwittingly spread COVID-19 around the world. Borat is shown coughing on a duck at the Wuhan market where the virus is believed to have originated, and then is shown in Australia coughing on Hanks while getting his autograph in front of the Sydney Opera House. Hanks and his wife Rita Wilson contracted the virus while in the country back in March, becoming the first major celebrities known to have to become infected.

With these major cameos, it's clear that Sacha Baron Cohen has somehow managed to crank up the absurdity to unheard-of levels in Borat 2.