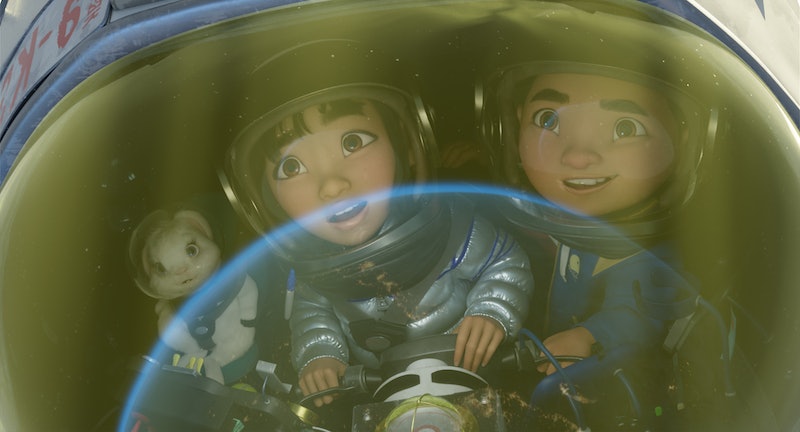 The new animated musical Over the Moon is now streaming on Netflix and features an outstanding cast with some of today's most beloved singing voices on the soundtrack. Directed by Glen Keane, the animator behind Disney classics like The Little Mermaid, Beauty and the Beast, and Aladdin, Over the Moon tells the story of Fei Fei (voiced by newcomer Cathy Ang), a young girl with an incredible passion for science. She builds a rocket ship to the moon to prove the existence of the legendary moon goddess Chang’e (Phillipa Soo). Landing on the moon, she discovers a whimsical land of magical creatures and embarks on a quest.

Interestingly, Over the Moon didn't start out as a musical. As Keane says in the film's press notes, "In the creative process we discovered the emotions of the characters ran so deep that there were often times where words simply weren’t enough. Singing felt like the purest way to capture our characters’ journeys."

Here's the lowdown on all of the songs on the Over the Moon soundtrack, which is out on the same day as the Netflix movie, with some additional insights from songwriters Christopher Curtis, Marjorie Duffield, and Helen Park.

"'On The Moon Above' is the retelling of the legend of Chang’e," the trio says. "It needed to be a lyrical folktale, fairy tale, and bedtime story all at once, and give the backstory needed to move the plot forward."

This track is "a musical sequence designed to capture the lively and percussive beat of the family moon cake business, and to carry the audience through the seasons of Fei Fei’s young life to her mother’s illness and beyond."

"Rocket To The Moon," the songwriters say, "represents Fei Fei’s journey and the journey at the heart of the film. The song starts out almost like a prayer; Fei Fei longs for her mother, but an intuitive voice breaks through her grief and inspires her to prove that Chang’e is real and to build a rocket to the moon."

For Ang's big moment, Curtis, Duffield, and Park "wanted to portray the designing and the building of the rocket piece by piece. Fei Fei uses her love of science to get her there, all in the effort to keep her family together. We wanted the audience musically and lyrically to take off with her."

“Ultraluminary” introduces Chang’e as a character, someone who the songwriters describe as "a goddess who’s larger than life, a charismatic and confident leader of the kingdom of Lunaria, but who also has deep hurt and pain that she tries to bury inside.

Through this introductory song, they tried to "convey her undeniable force, beauty, and irreverence through this music that demands people to dance. The bridge section allows the audience to take a glimpse of her vulnerability, but we snap back into the pop number as she sings 'from tears I rise, I rise' — which shows that though she’s in pain, she rises up every day, even stronger from her tears."

Perhaps with Soo's casting, Hamilton's influence was inevitable, as the filmmakers wanted "Hey Boy" to be "a rap battle between two strong and spirited personalities. Chang'e’s cadence had to embody her divaesque attitude as she tries to intimidate Chin, and Chin’s cadence had to be annoying and playful as he gets more confident about his ability to beat Chang’e. The song builds to the climax where Chin defeats Chang’e. Two powerful personalities competing in one fun ping pong game!"

Jeong plays a moon creature named Gobi. "We tried to capture Gobi’s playful nature and humble character through the sound of the ukulele," the trio says. "It’s a song we wanted to be comforting to anyone going through grief. That even if everything seems to change and you’re holding on tight to the memories of your loved one, you can move forward with them in your heart, and you’re wonderful going through that process.

This reprise is "a bilingual song/spell that evokes longing and hope simultaneously. It tells the love and loss backstory of Chang'e and her forever Houyi. As she conjures his spirit, we see her not as the Goddess but as the young woman she once was on earth - truly and deeply in love."

"Love Someone New" the songwriters say, "had to hold the themes of the film tightly in its musical arms, and then let them go. In it, Chang'e releases Fei Fei from enough of her grief that she comes to understand that she can love again. And when Fei Fei accepts that she can love someone new, she gives that same gift to Chang'e in return."

More like this
Lindsay Lohan & Jonathan Bennett Celebrated Mean Girls Day Very Differently
By Jake Viswanath
What’s New On Netflix: Ana De Armas’ 'Blonde' & A Nick Kroll Special
By Arya Roshanian
Here’s Everything Coming To & Leaving Netflix In October
By Jake Viswanath
12 ’90s Movie References You Missed In 'Do Revenge'
By Radhika Menon
Get Even More From Bustle — Sign Up For The Newsletter