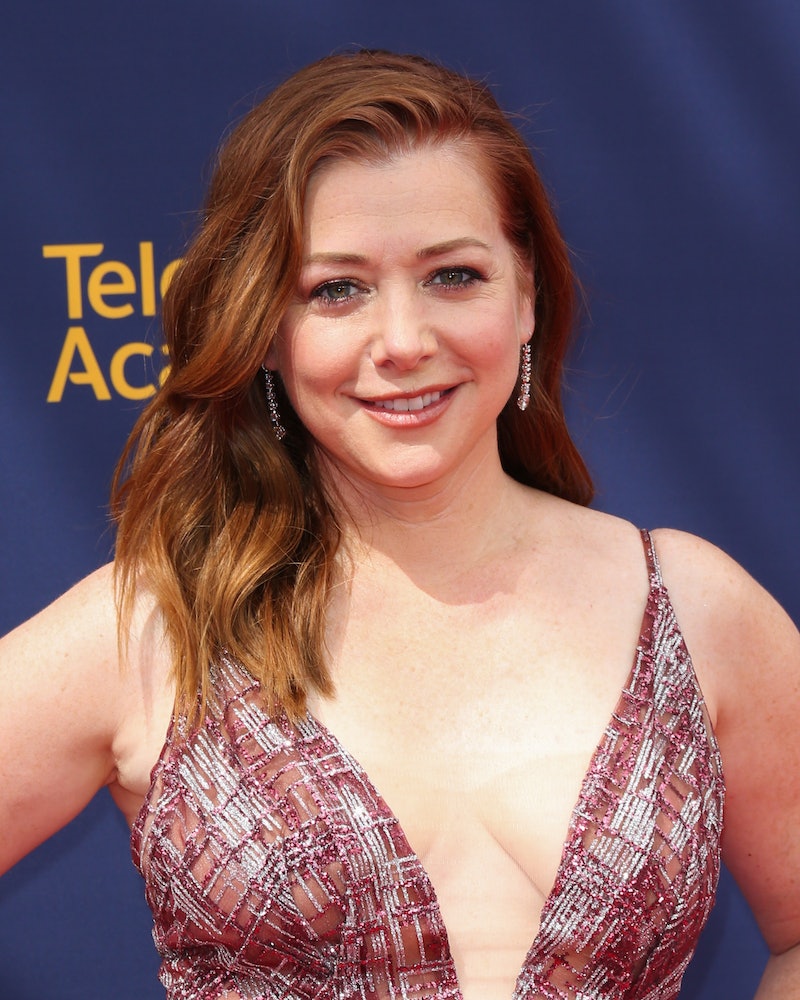 Not only is the dream house that Kevin Pearson built on NBC’s This Is Us very real, but it actually belongs to actor Alyson Hannigan. While appearing on SiriusXM’s The Michelle Collins Show on Thursday, Oct. 7, the How I Met Your Mother alum shared her home’s impressive history, including how it came to be a key setting on the drama series.

Explaining that the previous owners often rented the Encino, California home — which has been featured in such TV shows and movies as Marvel’s Agents of S.H.I.E.L.D , 2011’s Fracture, and a 2016 Hyundai Super Bowl commercial with Kevin Hart — she joked, “I think my house’s resume is probably longer than mine.” Initially, she and husband Alexis Denisof (with whom she shares daughters Satyana, 12, and Keeva, 9) had agreed they would “never” follow suit after moving in (“We know what productions do to locations and all that,” she said). However, they decided to make an exception for This Is Us.

“It turned out our neighbor was the director, and we were like, ‘Well, if we are ever going to do it, we would do it for that show because it’s so good,’” Hannigan said. “Long-running shows, the crews are always very respectful.”

As This Is Us fans are aware, in the world of the show, her real-life home was designed by Jack Pearson (Milo Ventimiglia), and Kevin (Justin Hartley) later constructed it at his ailing mother Rebecca’s (Mandy Moore) request. The house has been featured in several flash-forward scenes already and will reportedly continue to be seen in the family drama’s sixth and final season, which is set to premiere in early 2022. Photographers snapped the This Is Us production crew setting up shop in September, while Hannigan moved her family’s belongings to a smaller Los Angeles property, per the Daily Mail.

While filming at the location, the This Is Us team did indeed treat it well. In fact, they left the home in better condition than they found it in, according to Hannigan. “Not only did they give us our house back in wonderful shape, they fixed things that I had damaged,” the Buffy the Vampire Slayer alum told Collins. “So they were touching up some paint or whatever, and there was clearly one of my kids’ handprints on a wall, and they’re like, ‘Would you like us to do that as well?’ And I’m like, ‘I know that wasn’t from you, but yeah, thank you!’”

Hannigan and Denisof bought the five-bedroom mansion for $7.95 million in late 2016, per the Los Angeles Times. The Peter Tolkin Architecture-designed home was built in 2001 and it sits on three acres of land, boasting views of the San Fernando Valley, as well as an abundance of surrounding oaks, sycamores, palms, and fruit trees. Among the other features are a swimming pool, lighted tennis court, gym, art studio, and separate guest house, plus that impressive resume.

This Is Us viewers certainly won’t have to wait for an Architectural Digest feature to get a peek inside.

More like this
'GoT' Star Emilia Clarke Says She "Just Can't" Watch 'House Of The Dragon'
By Brad Witter
The Black Lotus Staff Has "Had Enough" In The 'White Lotus' Spoof From 'SNL'
By Brad Witter
Here’s Why Danny Masterson’s Hyde Isn’t In 'That '90s Show'
By Brad Witter
Everything To Know About The 'Daisy Jones & The Six' TV Series
By Maxine Harrison and Brad Witter
Get Even More From Bustle — Sign Up For The Newsletter
From hair trends to relationship advice, our daily newsletter has everything you need to sound like a person who’s on TikTok, even if you aren’t.