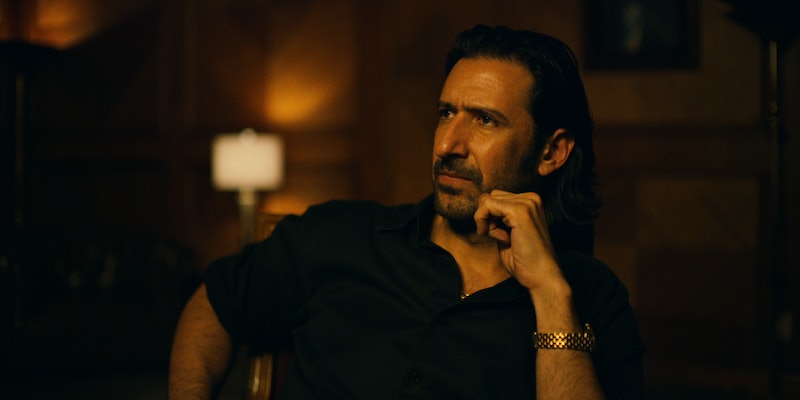 Following Félix Gallardo's arrest in 1989, his Guadalajara Cartel splintered into warring factions. This paved the way for new leaders in the Mexican drug trade, including Amado Carrillo Fuentes (José María Yazpik), aka the Lord of the Skies, who became the head of the Juárez Cartel alongside Rafael Aguilar Guajardo. Narcos: Mexico’s third and final season chronicles his rise to power.

Per The New York Times, Amado grew up in Sinaloa, Mexico as one of eleven kids. Though his family was poor, he was the nephew of Guadalajara Cartel leader "Don Neto" and eventually rose to wealth in the 1980s under his uncle’s tutelage. He was relatively obscure in the drug trade until 1994, when he became the first drug lord to use a large fleet of passenger airplanes to transport cocaine from Colombia to the Mexico-U.S. border, thus earning his nickname. Pioneering the way cocaine was transported turned Amado into the head of a multi-billion dollar empire; he had major operational centers, haciendas, and penthouse apartments in several northern cities. At the height of his power, he reportedly owned up to 30 Boeing 727s.

Though Amado often paid off Mexican law enforcement officials and politicians to evade arrest, his crimes quickly caught up to him. Faced with increasing scrutiny from U.S. intelligence agencies, he went underground. Eventually, he checked himself into a Santa Monica hospital in Mexico City under the fake name Antonio Flores Montes and asked for extensive plastic facial surgery to hide his appearance. After undergoing eight hours of surgery, he died on July 7, 1997, at age 41.

Four months after Amado's death, The New York Times reported that three of the surgeons who worked on him were being charged with murder. Mariano Herran Salvatti, the then-head of Mexico's anti-drug agency, said that "acting with malice and with the intention of taking his life, these physicians applied a combination of medicines that resulted in the death of the trafficker." By the time Herran Salvatti reported it, all three surgeons had already been found tortured to death.

Per the BBC, Amado’s brother Vicente — known as “The Viceroy” — allegedly took over leadership of the Juárez Cartel in the wake of Amado’s death. Amado’s son, Julio César Carrillo, also reportedly helped his uncle run the business.

In 2014, Vicente was arrested on charges of organized crime, money laundering, and weapons violations. On Sept. 14, 2021 he was sentenced to 28 years in prison in Mexico, per the Associated Press. Carrillo was found shot to death at a house in Novolato on Aug. 15, 2020. Three months prior, the Mexican government auctioned off Amado’s $2 million villa, along with 70 cars, five planes, five other homes, and more than 100 pieces of jewelry. Juan Pablo Ledezma is now alleged to be running the Juárez Cartel.

This article was originally published on Feb. 19, 2020