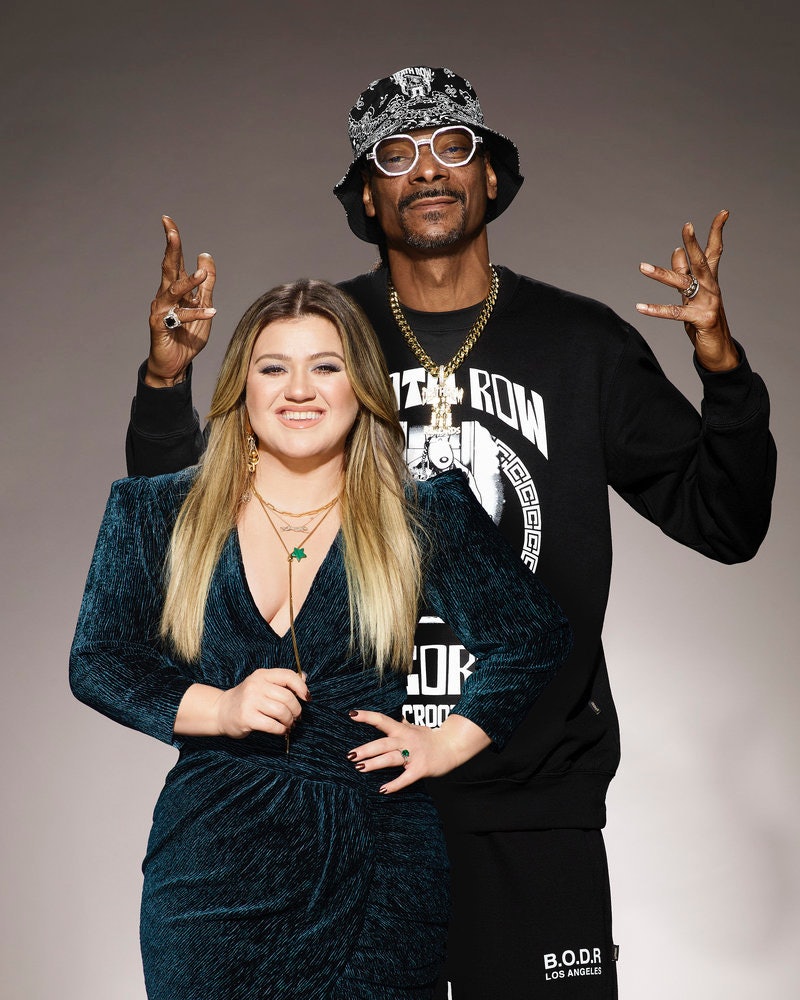 Since its inaugural broadcast in 1956, Eurovision has helped to catapult artists like ABBA, Celine Dion, and 2021 winner Måneskin to international stardom. Now, NBC is bringing the competition to the U.S. with American Song Contest, premiering on March 21.

Whereas in the original competition musicians represent their home countries, the U.S. version features one performer from each of the 50 states as well as Washington, D.C and the five U.S. territories. The contestants encompass a wide range of genres and include a mix of undiscovered, up-and-coming, and established performers competing for the title of Best Original Song. The show is hosted by Kelly Clarkson and Snoop Dogg.

Over the course of eight weeks, the performers — which include solo acts, duos, bands, and DJs — will compete in three stages of the competition: Qualifying Rounds (March 21, 28, April 4, 11, 18), Semi-Finals (April 25 & May 2), and the ultimate Grand Final (May 9), where one state or territory will be crowned the winner. Atlantic Records has also partnered with American Song Contest to release the original songs featured on the series.

For those who don’t know the history of Eurovision, it was created in 1956 to unite Europe after World War II. Clarkson hopes the U.S. version will have a similarly unifying effect. “We are so unfortunately divided and having [my] talk show and [hearing] all of these different human interest stories and having so many things going on — it’s been a very hard couple of years and now it’s getting more serious,” the singer explained during a March 14 virtual press conference, per Billboard. “Feeling like you are not isolated and that you are a part of something bigger than your everyday world is so important. That’s what this show is going to do for people. Everyone is being represented. It’s a really great concept in general but one that is very needed right now.”

Here’s everything else to know about American Song Contest, including which musician is representing your state and how you can vote for them.

Among the artists competing in American Song Contest’s inaugural season are a K-Pop artist from Oklahoma and a cowboy rapper from Wyoming, as well as music superstars Michael Bolton, Jewel, Macy Gray, and even “Thong Song” rapper Sisqó. Here’s the full list of which performer is representing each state and territory.

The artists who advance each week are determined by a combination of public and jury votes, including a special TikTok component, with voting opening on Mondays and closing Wednesday morning. Smaller states won’t be at a disadvantage: NBC is using a point system that gives each location equal power regardless of the population. In addition to the NBC website, viewers can vote for their favorite performers on the NBC app, as well as via an in-app voting hub on TikTok, which also encourages users to create original content using music from the series and engage with the various contestants.

Meanwhile, there is a 56-person jury comprised of one music industry executive, songwriter, radio programmer, manager, or member of the Recording Academy from each state and territory. (The full list of American Song Contest jury members is below.) Together, the jury will evaluate each artist’s live performance based on artistic expression, hit potential, originality, and visual impression. They will then immediately advance one artist to the Semi-Finals, while the remaining three spots will be determined by combining their votes with fan votes.

Here are all the members of the jury panel:

There’s also an added twist. Once the Semi-Finals begin on April 25, a “redemption” song will be revealed, adding an 11th artist back into the competition to perform that week for the chance to advance to the Grand Final. At the end of each Semi-Final, the jury will award their highest-rated artist with an immediate spot in the Grand Final. America’s votes will help to decide along with the jury which four additional artists will advance.

The top 10 artists will take the stage for the last time in the May 9 Grand Final, when America’s favorite new song will be revealed. The winning track will also be featured in a commercial for T-Mobile, the show’s official voting partner.

More like this
Siva Kaneswaran's Net Worth Shows The Value In Chasing The Sun
By Bustle UK
The Bachelor’s Christina Mandrell Comes From One Of Country Music’s Most Famous Families
By Brad Witter
Michelle Heaton’s Husband Is Her Biggest Supporter
By Darshita Goyal
Andy Cohen Apologized To Larsa Pippen After A 'RHOM' Season 5 Reunion Dust-Up
By Brad Witter
Get Even More From Bustle — Sign Up For The Newsletter
From hair trends to relationship advice, our daily newsletter has everything you need to sound like a person who’s on TikTok, even if you aren’t.