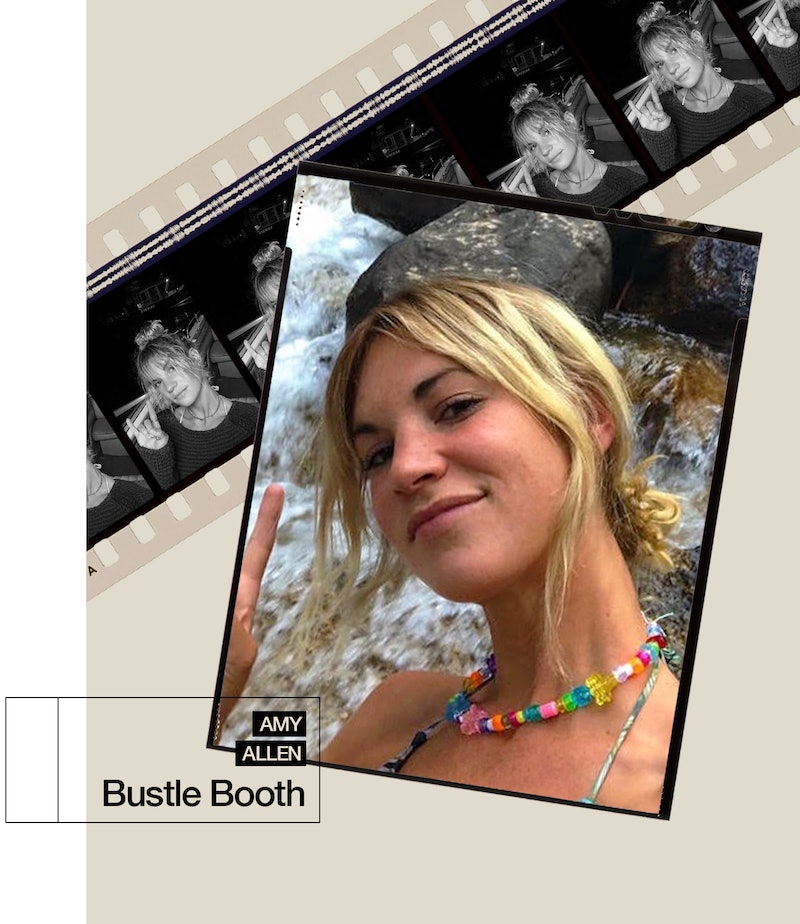 Amy Allen knows how to write a hit. The 28-year-old singer-songwriter has worked with stars like Harry Styles, Selena Gomez, and Shawn Mendes — but it was Allen’s experience working on Halsey’s “Without Me” that left the most profound impact. In 2018, Allen was performing the Halsey ballad at a Grammys party when she suddenly broke down. “I'm not usually a crier but I just got so emotional,” Allen tells Bustle of finally singing the words she wrote aloud. “I realized I’d been missing performing [while focusing on songwriting] really badly.” The next week she set to work on writing her own (still untitled) album — one that's composed of songs so deeply personal that she had no choice but to sing them herself.

Growing up in small town Maine, Allen was raised on classic rock. She played electric bass in her older sister’s all-girl rock band and started writing music between their gigs at local pubs. “I was [playing] all these Tom Petty songs and I wasn’t good,” she jokes. After college she moved to New York to pursue music and got her break in 2018 when she wrote "Back To You," Selena Gomez's breakup anthem. The song hit No. 18 on the Billboard Hot 100 and led her to pen more pop bangers like Styles' summer jam, "Adore You." “I love writing for other people,” Allen says. “But those songs are always one degree or two degrees away from hitting exactly how I felt, or being able to [express myself] exactly how I want to.”

Her new album, on the other hand, is the complete embodiment of how she's feeling now. The songs are raw, reflecting on everything from her experiences with new love to grief. On her most recent single, "Heaven," she sheds light on the pain of being close to someone who's struggling with substance abuse. It's a subject that's dear to Allen's heart, as she lost two people in her life to addiction last year. “The song is about loving somebody through an intense addiction," she says. "[It's about] seeing them for the person they are and not running away from it because it's scary and you're afraid you are going to lose them.”

While revisiting trauma hasn't been easy, it's been necessary for Allen's healing. “I didn't know how much [these issues were] weighing on my mind [until] I could make something without having any inhibitions," she says. "[To write music] without needing to incorporate someone else's story in it."

Get to know more about Allen — including her love for Hey Arnold! — in her Bustle Booth questionnaire below.

“That’ll do donkey” from Shrek

I May Destroy You

What are your all-time favorite song lyrics?

THIS IS SO HARD. There are too many... but have always loved, “We’re just two lost souls swimming in a fish bowl year after year” ;)

Now or when I’m passed on? I guess that I was kind and helped make the world a slightly more loving place... And I want someone to play “Start Me Up” by the Stones at my funeral.

"Ziggy Stardust" or "All Star"

More like this
The Beyhive Is Mad At Harry Styles After Beyoncé’s Album Of The Year Snub
By Jake Viswanath
Harry Styles Just Split His Pants In Jennifer Aniston’s Face
By Sam Ramsden
Harry Styles Had A Major Stage Malfunction At The Grammys
By Darshita Goyal
Hailee Kaleem Wright's Topsy-Turvy Path From MTV To Broadway
By Samantha Leach
Get Even More From Bustle — Sign Up For The Newsletter
From hair trends to relationship advice, our daily newsletter has everything you need to sound like a person who’s on TikTok, even if you aren’t.