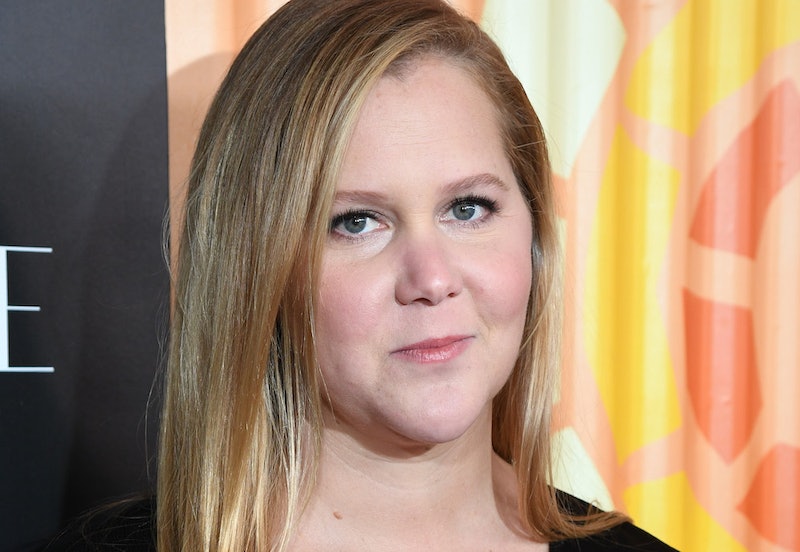 In a frank discussion that touched on childbirth, Amy Schumer revealed that Serena Williams gave her postpartum advice following the birth of her first child, Gene. The comedian opened up about the mental and physical pressures placed on women to "bounce back" after they give birth in a new interview, saying that she did her best not to let it affect her. To that end, Schumer said she gave herself "so much time and patience" after she and her husband, Chris Fischer, welcomed their son Gene in 2019 — a motherhood mantra that came from none other than the tennis athlete.

"I just rejected it right away because it seemed so unrealistic to me,” Schumer said in a new interview with BuzzFeed of the ideals placed on new mothers. "Even though I had a baby nurse — I had all the possible help you can have — it’s still really hard." She continued, "I just remember wearing a pad, wearing the underwear, and I gave myself so much time and patience. I promised myself that I would be gentle. I also was lucky enough to talk to Serena Williams on the phone."

Schumer explained, "She was patient with herself and she’s the one who had to get back to playing tennis. So between my friends, and the promises I made to myself, I was like, ‘I am in no rush.’" The comedian added that it’s been 14 months on, and she’s still in no rush. "Someone could think that I’m in my second trimester," she said. "I’m not even joking. I really don’t feel any shame about that."

Williams — who welcomed her first child, daughter Alexis Olympia Ohanian Jr., in 2017 with husband Alexis Ohanian — has been vocal about her pregnancy and its complications. She detailed her emergency C-section surgery and pulmonary embolism in a piece for CNN in 2018 — and highlighted the fact that Black women are more likely to die during childbirth due to health disparities. And like Schumer, Williams has also been open about her postpartum struggles. In a lengthy Instagram post in 2018, Williams told new mothers it’s OK to have rough days. She wrote, in part, "Last week was not easy for me."

She continued, "Not only was I accepting some tough personal stuff, but I just was in a funk. Mostly, I felt like I was not a good mom." Williams added of feelings that she wasn't "doing enough" for her daughter, "We have all been there. I work a lot, I train, and I’m trying to be the best athlete I can be…. Whether stay-at-home or working, finding that balance with kids is a true art." Of those rough days, Williams wrote, "There’s always [tomorrow.]"

Given just how tough postpartum pressures can be, it's nice that Schumer and Williams have support company in each other.

More like this
Beyoncé & Madonna’s “Break My Soul” Remix Honors A Group Of Black Icons
By Stephanie Topacio Long
Demi Lovato Said Her Dream Music Collaboration Is Hayley Williams
By Grace Wehniainen
Serena Williams Is Retiring From Tennis: “I'm Ready For What's Next”
By Marina Watts and Grace Wehniainen
At 14, Tatiana Maslany Was Obsessing Over Tamagotchis & The Spice Girls
By Gabrielle Bondi
Get Even More From Bustle — Sign Up For The Newsletter