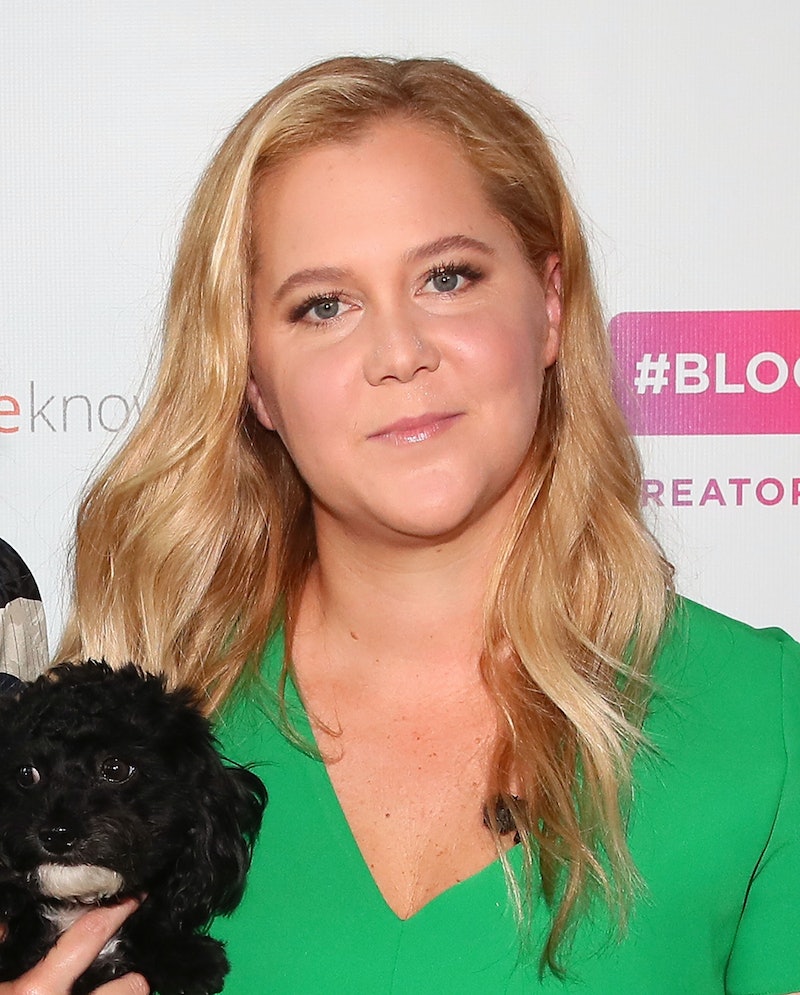 All throughout her pregnancy, comedian Amy Schumer jokingly compared herself to Meghan Markle. Since their due dates were around the same time, it shouldn't come as a huge surprise that their babies' births were both announced on Monday, May 6. While Markle's baby arrived early that morning, Schumer welcomed her first child with husband Chris Fischer the night before.

The Trainwreck star shared the news on Instagram on Monday afternoon, writing, "10:55 pm last night. Our royal baby was born." Of course, she made a reference to the royal baby — how could she not? And along with that caption, Schumer posted a sweet family photo, where she's cradling the newborn and Fischer is kissing her on the cheek. (Bustle reached out to Schumer's rep for any additional details, including the child's name.)

The baby announcement came soon after Schumer posted a photo from the Met Gala steps. Since she wouldn't be able to attend Monday night's big fashion event, she posed — baby bump and all — the night before. She wrote in the caption, "Met look this year. Last night on the way to the hospital." She's all smiles in the impromptu snapshots, rocking a comfy-looking ensemble.

While the name hasn't been announced yet, fans do know one thing: Schumer gave birth to a baby boy. On Sunday, she casually revealed her baby's sex at the very end of a post calling attention to her efforts to protect farmworker women:

"Hey! We love @chancetherapper and hate to be the ones to tell him that Wendys is the only fast food chain refusing to protect farmworker women from sexual assault and rape in the fields. This is true. Please read that sentence again. Message for the people in charge: Instead of spicy nuggets, we want food that is harvested with dignity NOT violence. Please join the @fairfoodprogram and #BoycottWendys link in my bio of how you can help. Also we are having a boy."

In a statement regarding Schumer's post, Wendy's told Bustle in part, "This is a complex issue, but be assured that we do not purchase the field grown product that the Fair Food Program covers. In fact, Wendy’s is proud to only purchase tomatoes from indoor hydroponic North American farms."

Throughout her pregnancy, Schumer has been super candid about the ups and downs of the process — ranging from posts about puking, to doctor's office snapshots, to mirror selfies boasting about not puking. She also strategically used the added attention to highlight causes she cares about, including farmworkers' rights (as mentioned above) and voting in the midterm elections.

Another staple in Schumer's pregnancy? Those Markle comparisons. She clearly had fun with the fact that they were on similar timelines, telling the Los Angeles Times in October, "Chris and I are thrilled and almost positive he’s the father. I look forward to competing with Markle every step of the way." Oh, and she even went as far as photoshopping her and Fischer's faces onto Markle and Prince Harry's bodies.

It's only fitting that these two new royal baby boys — one comedic royalty, the other actual royalty — entered the world within 24 hours of each other. Here's hoping they get to have a playdate in the not-too-distant future.