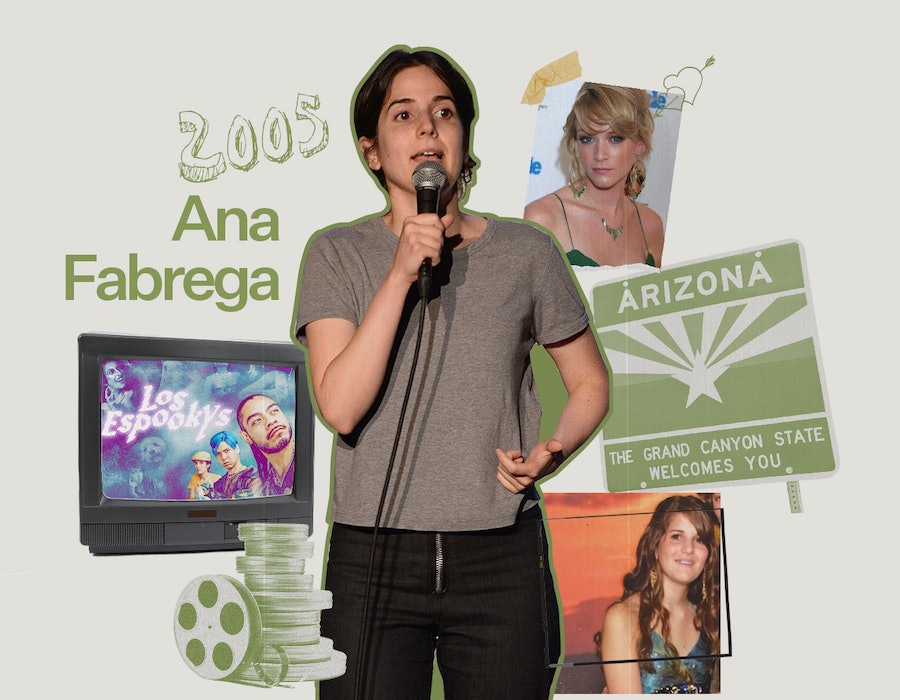 Ana Fabrega’s first love was the drums. Her second love was a contestant on Season 4 of America’s Next Top Model. Comedy wasn’t even on teenage Fabrega’s radar. “I never did theater in school. I never thought I had an interest in [performance,]” the 31-year-old actor, writer, and comedian tells Bustle. “I think my 14-year-old self would think it is cool I am doing something creative.”

As a studious 14-year-old in Scottsdale, Arizona, Fabrega was decidedly not the class clown. She ate her lunches in the library and did all her homework. Her main creative outlet at the time was the drums. “I thought I wanted to be a musician. I was playing drums and I taught myself piano that year and I was like, ‘I want to do this for a living’,” Fabrega says. “Like all 14-year-olds, I was trying to figure out who I was.”

Comedy would come into her life much later. It wasn’t until Fabrega graduated college and was working a job in finance that she began going to open mics on the side, and ultimately quit her day job to focus all her attention on comedy. In the time since, she’s used her craft as a way of getting to know herself, channeling her identity, her worries, and her interests into her work. “I write when it feels like something I gotta get out of my system,” she says.

That work became collaborative when she began developing Los Espookys, HBO’s beloved and bizarre Spanish-language comedy series, alongside Julio Torres and Fred Armisen. Not only has Fabrega picked up a new skill in Los Espookys Season 2 — the writer, co-showrunner, and star also directs two episodes — but she’s kept plenty busy with other projects, writing and appearing on the Latinx remake of Father of the Bride and working on a comedy special. She may not have pursued a career in music, but she still jams on the drums occasionally, much to the chagrin of her downstairs neighbor. “Within a couple days of getting an electric kit, my neighbor was like, ‘Can you not do that?’”

Below, Fabrega reminisces about her signature eighth grade footwear, loving Iron and Wine, and running into her first celebrity crush years later at a bar.

I had just started my freshman year of high school. I was in Scottsdale, Arizona, which is where I grew up. I moved there in first grade and lived there until I was 18. I was doing this program called IB, it’s kind of like AP but more international. I had a bunch of classes with the same kids, nerdy type of kids. I had a small group of friends that would talk quietly and eat our lunch in the library.

Was comedy a part of your life at 14?

I wasn’t doing anything comedy-wise. I liked to make my friends laugh. There was a little improv group at our high school. They would do two shows a year, and everyone was like, “They do the funniest stuff!” I went, and then the next year people were like, “You should audition.” I was shy and nervous about, “What if I audition and I don’t get in? That would be so embarrassing.” I did audition and I did get in, but that wasn’t until my junior or senior year. It wasn’t until a year out of college that I started comedy — I made videos and put them online. After a year of working, I tried standup and found a scene of like-minded people and shared sensibilities.

There was not a ton to do. If you weren’t seeing a movie at the movie theater, it was a lot of going to someone’s backyard and hanging out there. I wasn’t a big partier. Every now and then there would be a party and I would go.

I had a pair of dark green argyle slip-on shoes that I wore a lot, jeans from Lucky that had a little fade on the side with a slight flare. I had a lot of plain tank tops or T-shirts. It took me a long time to figure out what I wanted to wear because I grew up sharing a room with my older sister, who would be like, “Wear this,” and I would just be like “Okay.” The argyle sneakers were a big staple for me.

I know you played drums. What kind of music were you listening to at the time?

I went to my first concert at 14 and it was Iron and Wine. I went to go see them with my dad, because I would do that annoying things that kids do with their friends, where I was like, “I don't want to tell you what I listen to.” I did show my dad and he liked them, so we went to see them.

Did you have any formative celebrity crushes at 14?

I had a really big crush on a contestant from America’s Next Top Model. Mind you, at this age I was thinking maybe I was asexual. I didn’t really like any guys. [I was] fully not aware of what my sexual interest was. In hindsight, it’s really funny to look at this and be like, “Oh, clearly, it is so obvious.” There was a contestant on the fourth season that was the runner-up named [Kahlen Rondot] who I just thought was the coolest. I looked at her Myspace and she listened to Iron and Wine and that is how I found out who that was in the eighth grade. I had pictures of her in my room — I was truly obsessed with her. And then one day, when I was 21 or so, I was at a bar in Brooklyn and she was bartending and I was like, “Oh my god, it’s you, I loved you when I was 14.” She gave me a hug and a shot. She came around from behind the bar and hugged me and picked me up and I was like, “Okay, I can die now.”

More like this
At 28, Rosie Perez Risked Her Career To Stop Playing Stereotypes
By Gabrielle Bondi
At 28, Debra Jo Rupp Was Living A Much Different '70s Show
By Grace Wehniainen
Here’s What Happens To Bill & Frank In 'The Last Of Us' Video Game
By Brad Witter
'GoT' Star Emilia Clarke Says She "Just Can't" Watch 'House Of The Dragon'
By Brad Witter
Get Even More From Bustle — Sign Up For The Newsletter
From hair trends to relationship advice, our daily newsletter has everything you need to sound like a person who’s on TikTok, even if you aren’t.