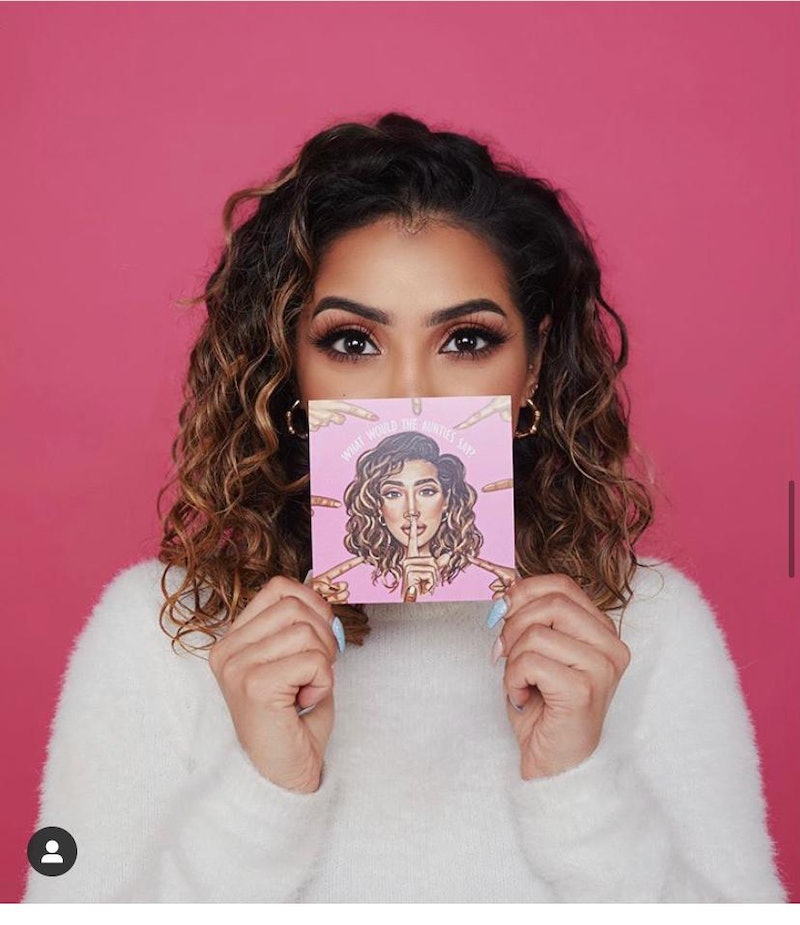 Beauty influencer Anchal Seda logs into our Zoom call looking as glamorous as I expected, hair perfectly coiffed and curly, fresh from having filmed a new video. The British-Indian make-up artist is known for her on-point tutorials and honest reviews, which have helped her build a connection with her 335k followers across Instagram, Youtube, and TikTok.

Aside from gaining thousands of loyal fans, Anchal explains that she's also come a long way personally during her seven years in the industry. When she first started out (after graduating from university with a degree in special effects make-up), there weren't many people of colour doing make-up tutorials, Anchal tells me, and she used to feel grateful whenever she secured work as an influencer. “I was like, 'Oh my god! They’ve chosen an Indian girl!' I’d feel lucky and privileged to be included in someone’s campaign, when it should just be the norm."

Since then, the tables have turned, with brands falling over themselves to get Anchal to promote their products. The hard-working 29 year old has been carving out her own space in the beauty world and has now worked with Garnier, Estée Lauder, MAC, Keihls – the list goes on.

Last month, Anchal decided to do something totally new, pivoting into podcasting and launching a new series called What Would The Aunties Say?

In her podcast, Anchal invites on special guests to talk about issues that brown girls face but are often afraid to talk about for fear of what "the aunties" might say. In the South Asian community, "aunties" is a catch-all term for judgemental elders who hold very different (often old fashioned) standards compared to younger generations.

What Would The Aunties Say? pulls no punches, exploring the pressures to get married and the lack of understanding around mental health issues as well as subjects like caste-ism and colourism.

Anchal tells me she had a personal motivation for wanting to explore these intergenerational tensions. She herself has "really strong opinions" and "a strong, young British-Asian mindset" but she's sometimes found it difficult to express herself with her parents and family. "Some of their views would really bother me and I've almost had to hold back on my opinions before I'm judged," she says.

Respecting your elders is a big thing in South Asian circles, as is the idea that everything you do is for the good of the community and a reflection on your family. "I’ve always just held back as I'm too scared to let anyone down or deal with their judgement or be viewed as 'off the rails.' It’s how I started thinking about all of this," she says, speaking about the subjects discussed in her podcast.

"I’ve always just held back as I'm too scared to let anyone down or deal with their judgement."

Anchal ultimately decided not to bite her tongue anymore, knowing she wanted to be a voice for other British-South Asian women going through the same thing as her.

In What Would The Aunties Say?, Anchal doesn’t shy away from some of the most uncomfortable issues prevalent in her community, including attitudes of anti-Blackness. It’s a necessary conversation to have in the context of the current Black Lives Matter movement but is something that Anchal has used her platform to speak about for a long time. "I feel it’s so unfair to judge people on their skin colour, especially when we [South Asians] are of colour as well," she tells me. "It really bugs me and upsets me."

We discuss my personal experiences with this issue, as I am of Black and Indian heritage and have faced intergenerational trauma in my family due to my Indian grandfather never accepting my Black father. For this reason, I've always felt somewhat distant from the Indian community and, at times, I haven’t really wanted to disclose my heritage to Indians for fear of awkward or hostile reactions.

"Your experience made me a little bit emotional," Anchal says, explaining that she read my piece on the topic. "It makes me sad because why should people treat you any differently?"

Episode seven of What Would The Aunties Say? explores exactly this, and Anchal is joined by Jonah Batambuze, founder of The Blindian Project, a platform that aims to normalise and celebrate Black and South Asian relationships and dismantle anti-Blackness.

During episode seven, Anchal opens up about her own experience of ending a romantic connection with a Black partner because of the anti-Blackness she was experiencing around her. In the candid conversation with Jonah, Anchal says she felt that it would be going against her families’ wishes to continue the relationship and, as supportive as she is of those interracial couples who do decide to stick it out, she herself found it too difficult.

"We need to educate our parents and tell them why it’s wrong."

Speaking from the opposite side of the fence, Jonah, who is Black, talks about his experience of marrying an Indian partner, which has been overwhelmingly positive.

"It is lovely to hear that but a bit of a shock," Anchal tells me. "I was actually so surprised that his personal story was so positive and that he didn’t come across any issues."

Elsewhere, the podcast also explores colourism and the view that having fairer skin is more desirable. Anchal is joined in episode two by Dr Vanita Rattan, a specialist in skin conditions that affect people of Asian and African origin. Rattan reveals that the obsession with fair skin is not only damaging but dangerous, with some South Asian women being so concerned about darkness that they avoid being in the sun to the point where they become vitamin D deficient.

Due to my own family history, the views discussed on What Would The Aunties Say? are sad but unsurprising for me to hear. Anchal is adamant that the younger generation will have to challenge them if anything is going to change. "We need to educate our parents and tell them why it’s wrong," she says, encouraging those who can to speak up and dismantle stereotypes. In other words, it's time to shake up some of the old-school auntie mentalities.

More like this
What Reporting On The UK’s Most Prolific Cyber Stalker Taught Me
By Sirin Kale
UK Viewers Will Have To Wait For The Terrifying 'Hellraiser' Reboot
By El Hunt
What Exactly Is The Bish & Chips Show?
By Frances Stewart
Nicola Coughlan’s Description Of Meeting Olivia Colman Is Just So Nicola Coughlan
By Sam Ramsden
Get Even More From Bustle — Sign Up For The Newsletter