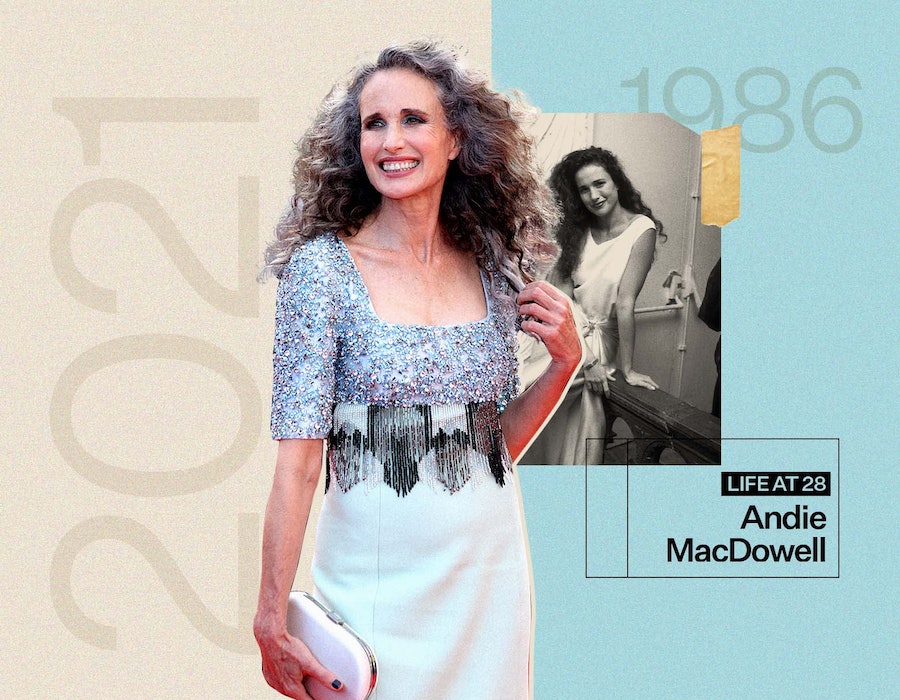 In Bustle’s Q&A series 28, successful women describe exactly what their lives looked like when they were 28 — what they wore, where they worked, what stressed them out most, and what, if anything, they would do differently. This time, Andie MacDowell reflects on the year she became a mom and got her big break at the same time.

When Andie MacDowell was a teenager in her hometown of Gaffney, South Carolina, she and her friends would drive 18 miles to the nearest city, find a bar where no one knew them, and pretend to be made-up characters to entertain themselves. “I was from a tiny town, so we were bored,” the actor says over Zoom. Years later, when MacDowell was 25, she ended up talking about two of the characters they created together — named Dot and Earl — in a 1983 Calvin Klein commercial.

Three years after that, following modeling campaigns for brands like Gap and Armani Perfume, MacDowell’s acting career was slowly starting to take off. “I remember telling my father I wanted to be an actress, and he said he knew a woman that had married someone who was on a soap opera,” she says. “That was the extent of what my parents had to offer me. So moving to New York was very helpful because it put me in the right place.”

MacDowell was on the brink of her big break at 28 when she got pregnant. “I wasn’t planning on having children,” she admits. “I had a baby, [Justin], in the middle of trying to make it. But I’m so thankful that I did.” She and her first husband, Paul Qualley — who she married that same year — went on to have two more children before divorcing in 1999.

Today MacDowell, 63, is acting alongside her youngest daughter Margaret Qualley in Maid, a Netflix series about a young single mom (played by Qualley) who becomes a house cleaner to support her child and escape her abusive partner. MacDowell plays the mother of her daughter’s character — a full circle moment the star couldn’t have imagined when she was a young actor starting out.

Below, MacDowell looks back on her 28th year, including moving to New York, landing the film that launched her acting career, and the advice she’d give her younger self.

It was interesting that I felt as good as I did because I wasn’t really getting acting jobs. Modeling gave me great stability, but I really wanted to be a working actor. So it blows my mind that everything happened at once: I had a baby that year and my son made me feel even safer, for some reason. Then things really changed after I starred in [Steven Soderbergh’s 1989 indie] Sex, Lies, and Videotape. It won an award at Sundance, so critically it was huge, and then people’s perception of who I was and what I was capable of shifted, so I just started working all the time.

Did you always want to be an actor?

I did theater in college and knew since I was a child that I wanted to act. I came from a really small town with nobody around me who did it. So I took commercial classes in New York when I first started — I hated them. But I loved doing the Calvin Klein ad. After starring in Greystoke: The Legend of Tarzan, Lord of the Apes [in 1984], I went to acting school for years and just stuck with it. I’d audition and would almost get jobs and the director would love me and say, “You did such a good job, but we’re going to hire so-and-so.” They wanted to hire a name and I wasn’t a name. When I got Sex, Lies, and Videotape, I didn’t know it was going to be the huge success that it was.

What was the transition like, moving from a small town in South Carolina to New York City to pursue your career?

I’m surprised that I wasn’t more overwhelmed. I think I was so ready for an adventure, and I was so happy to be there and explore a bigger world than I had been in. I was also really good at watching, listening, and paying attention. I always went to museums and always explored every place I went to. I read a lot. I knew I had to catch up and that I didn’t know enough, so I had to learn — but I enjoyed learning.

Do you remember what it felt like when you saw yourself in a magazine or on a movie screen for the very first time?

When I lived in Paris [before moving back to New York City], there was a cute little store down the street that had huge pictures of me in the window. I was walking down the road when I was 20 and I had not been there that long, and then saw my pictures — I was astounded that it was happening to me. That’s how I felt. It was magical.

What was a typical night out like when you were 28?

I mostly just worked and went to bed. That’s really what I liked to do. I’m not a big party person. I’ve always gotten great joy out of getting into bed with a book.

I was never really that glamorous. I liked flowy dresses and boots, cashmere sweaters — I’ve always liked casual sweaters, jeans, and boots. I also wore some great suits... the ‘80s were big on suits. I think a part of me was just wanting to feel comfortable.

What were you most proud of accomplishing at 28?

Probably having my baby, because it was a brave decision to take that leap of faith that everything would be OK. I didn’t know [Justin’s] father that well when we got married, and we ended up having two more children, so we did pretty good.

If you could give your 28-year-old self any advice, what would it be?

To forgive myself easier when I make mistakes. That, and to not clean the house so much when you have children.

More like this
At 28, Debra Jo Rupp Was Living A Much Different '70s Show
By Grace Wehniainen
At 28, Rosie Perez Risked Her Career To Stop Playing Stereotypes
By Gabrielle Bondi
'Bling Empire: New York’ Star Dorothy Wang Wants To Try 'The Simple Life'
By Alyssa Lapid
'That '90s Show' Star Callie Haverda Got Advice From Mila Kunis & Ashton Kutcher
By Brad Witter
Get Even More From Bustle — Sign Up For The Newsletter
From hair trends to relationship advice, our daily newsletter has everything you need to sound like a person who’s on TikTok, even if you aren’t.