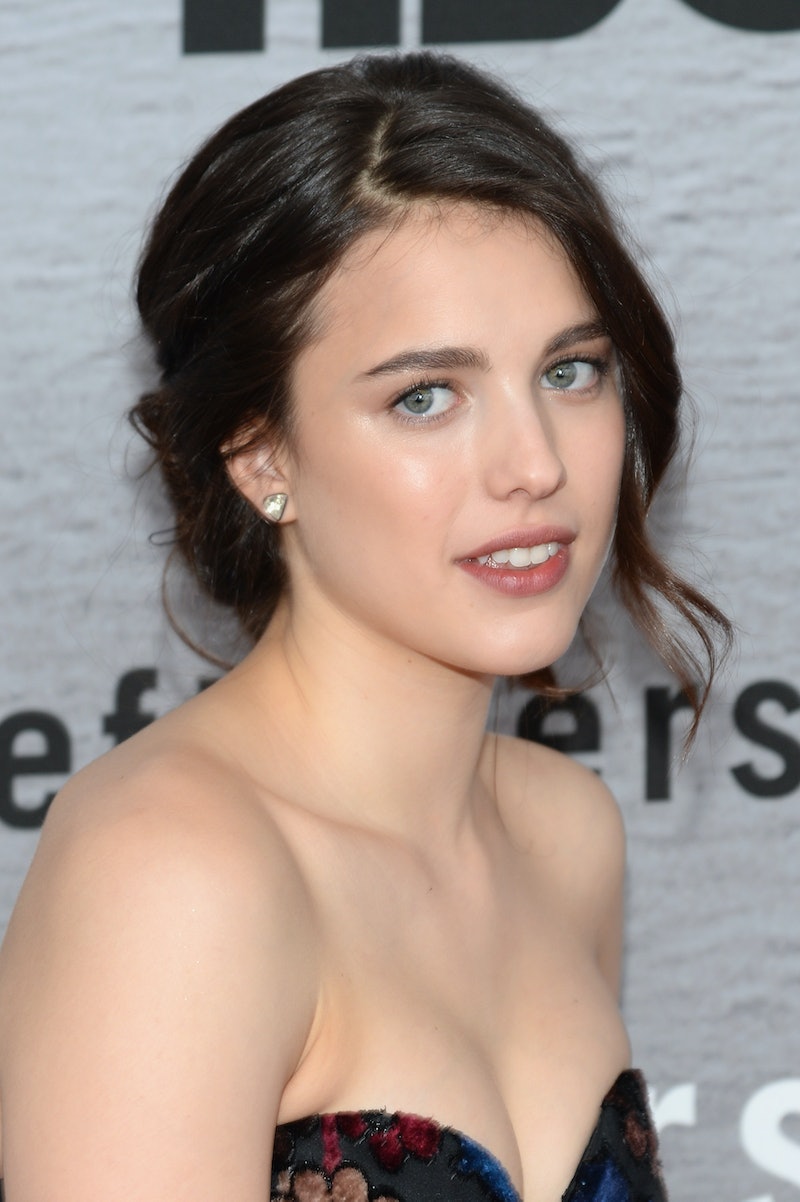 When viewers are introduced to Margaret Qualley during the series premiere of HBO's newest drama, The Leftovers Sunday night, she might not look too familiar. The 19-year-old actress will appear as Jill, the daughter of protagonist Kevin Garvey (Justin Theroux), the town's mayor. Jill was a straight-A student before The Departure that kicks off the events of the series, but that inexplicable event and her mother's abandonment have caused Jill to fall in with a disreputable crowd. She's a pivotal character on the show, and the fact that hers is such an unknown name make us wonder... Where did Qualley come from?

The young actress's only other credit on IMDB is a small role in last year's Gia Coppola-directed, James Franco-starring indie drama Palo Alto . How did Qualley jump from relative anonymity to starring in a prestigious HBO drama so quickly? Turns out she had a little help from a famous mother: Andie MacDowell. Best known for her roles in intelligent 90's romcoms like Groundhog Day and Four Weddings And A Funeral, as well as for being the face of L'Oreal for almost 30 years, MacDowell has three children: Sarah Margaret (her full name) is the youngest, then there's 24-year-old Rainey, and finally 27-year-old Justin.

MacDowell has been married twice, most recently from 2001-2004 to childhood friend Rhett Hartzog. Her three children are from her first marriage to former model Paul Qualley, which ended in 1999 after thirteen years. She didn't want her kids growing up surrounded by the celebrity culture of Hollywood, so she raised them on an isolated ranch in Montana. MacDowell moved her family to Asheville, North Carolina when the kids were teenagers so they could be closer to kids their age.

Originally, Sarah Margaret wanted to be a dancer. When she was 16 and attending high school at North Carolina School of the Arts, she spent the summer before her junior year completing a prestigious apprenticeship at the American Ballet Theatre and studying at the French Academy (actually in NYC) under the tutelage of instructors from the Paris Opera Ballet School. But she soon changed her focus, switching from dancing to acting — she spent the summer before her senior year of high school (when she was 17) studying at London's Royal Academy Of Dramatic Arts. She's now enrolled at NYU, although she's taking some time off from classes to film The Leftovers. (The show had its premiere at the university's Skirball Center.)

Margaret's older sister Rainey has also dabbled in acting, even co-starring with their mother in the 2012 dramedy Mighty Fine , but she's currently focused on her music career. Rainey splits her time between Los Angeles and Nashville, recording tracks for her "bluesy country" debut. Their older brother Justin still lives in Montana, where he runs the family ranch.

Margaret was fortunate enough to inherit her mother's flawless skin and believable beauty. Only time will tell if she also inherited her grounded, relatable acting abilities. We'll get our first taste this Sunday night when The Leftover premieres. Hopefully this will be the first step for Margaret in a career as long and successful as her famous mother's.