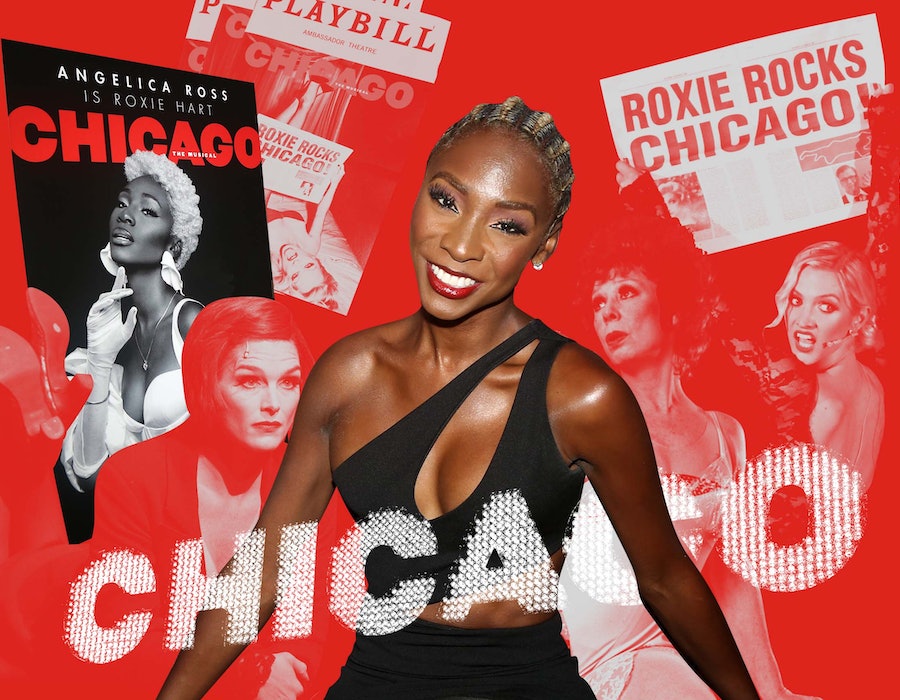 In late August, Angelica Ross had her first day of rehearsals to take over the role of Roxie Hart in Chicago on Broadway. She was on top of the world, and the theater. As she scaled a ladder to sing “Funny Honey,” Roxie’s Act 1 ode to her husband’s supposed devotion, she found herself eye-level with the Ambassador Theatre’s balcony seats. It’s a view befitting a killer role — and in the case of this fame-seeking murderess, it really is a killer role — allowing Ross to reflect on her own history-making moment.

“It gave me this very interesting bird’s eye view of my dream,” she tells Bustle. “I always wanted to do theater, and to do Broadway specifically, but I didn’t know when I’d have the opportunity to return to [it] since I was doing television.”

Ross, who’s 41, comes to Chicago after playing fan-favorite characters on Pose and American Horror Story, for which she made TV history as the first trans actor to have back-to-back series regular roles. When she begins her eight-week Chicago run on Sept. 12, she’ll become the first trans actor to star in the long-running show — and one of the first to play a leading role in a Broadway musical. It places her among a small group of trans performers who’ve played principal roles on Broadway (think Drag Race alum Peppermint in 2018’s Head Over Heels, Alexandra Billings in Wicked and The Nap, and A Strange Loop’s L Morgan Lee, who this year became the first trans performer to be nominated for a Tony Award).

Roxie, a role Gwen Verdon originated in 1975, has been played by the likes of Pamela Anderson, Brooke Shields, Brandy, Melanie Griffith, and Christie Brinkley. Ross is more than ready to join those ranks. “I keep overusing the word affirmation, but it’s what this is,” says Ross, who’s also a singer, founder, and activist. “When the moment you meet affirms everything you thought was right.”

Below, she talks about her plans for Roxie, advice she’s gotten from famous Chicago alums, and how her Broadway ambitions don’t stop here.

Was musical theater something you always wanted to do?

Broadway was my number one dream. When I was a kid, I wanted to go to Juilliard, but my parents were like, “We ain’t got no Juilliard money,” so I wasn’t able to fulfill that. But I was in 12 years of musical theater with a local city theater group, and I’d always have the lead role. I remember they cast me in Grease as Teen Angel, because they’d seen a Black actor play the Teen Angel. It didn’t hit me until I was in Pose. Billy [Porter] was talking about Grease and this orange wig, [and] I was like, “Hold up, Billy, that was you.”

Yes. [He] influenced my career from the beginning.

What was your first introduction to Chicago?

I saw a production of it years ago. When the movie came out [in 2002], I was obsessed and learned all the songs and lines from the movie. I have the DVD, honestly, on my dream board. So it’s been a full-circle moment to be in the show.

Many people have played Roxie over the years. What are you excited to bring to your version of her?

I’m excited to bring a layer of universality. When we talk about things being “universal,” that means they should include trans people. So to play a role as specific as Roxie, and have the audience hope, support, and cheer her on, I want people to leave the theater [with an] understanding that these experiences are universal, and that we all have dreams and deserve to see them come true.

Which numbers are you most looking forward to performing?

My favorite song so far is “My Own Best Friend.” It feels like the anthem of my life, being a Black trans woman in a society where everyone’s not so evolved. I just can’t take anything for granted. So I’ve always had to live with this essence that I’m my own best friend, because if I don’t love myself, how the hell am I going to love somebody else? And that allows me to bring up a certain essence for Roxie as well, understanding that she’s thinking on her feet and has to protect herself.

You’re joining a brilliant group of trans performers who appear on Broadway. What does it mean for you to become part of that tradition?

I would love to play a trans role on Broadway, [but] this moment is about showing that trans people can play any role. And it means a lot to me, because sometimes we try to fold ourselves to fit into boxes that we feel like we’re going to be cast in. I want those who come behind me to know they can be more than they ever thought [possible]. Because I am having that experience right now.

Have you gotten to talk with any Chicago alums? So many people have done stints in this musical over the years.

Erika Jayne called me and we got to talk. She was so funny and gave me the best advice, to enjoy the experience, and told me that the crew and cast are amazing people to work with. But she also gave me a heads up that there’s a sign on the ladder that says, "Stop here, b*tch." [Laughs.] So I know where to actually stop on the ladder. I reached out to Brandy, who’s been so warm and welcoming. I asked her about the wigs. I'm like, “Do they see the lace on the wigs? Because I didn’t see your lace on your wig.” She was like, “Nobody’s even going to care about that.”

And [I was] able to touch base with Sheryl Lee Ralph. I saw her at Essence Fest [when] I wasn’t sure whether I was going to accept the role. She looked at me like a mother and said, “Oh no, no, no, you are definitely doing this.” And she’s like, “This is not only great for Chicago, but this is going to be your moment, sweetie.” And she said, “We are going to pack that auditorium.” Hearing that love and support for someone like Sheryl Lee Ralph — Broadway legend, Emmy nominated — I am being affirmed by the stars, literally.

I love that so much. What other dream roles are on your list?

I would like to play Elphaba in Wicked. I think it would land so well, because in the novel, you learn that she was born a hermaphrodite. It’s a piece of the story that’s not on the stage — her adolescence and college years, meeting men and boys and having them react to her body. I’d also love to do Dorothy in The Wiz, and Miss Celie in The Color Purple. So I’ve got my eye set on some big roles, and I hope the rest of Broadway has as much vision as Chicago does.

This interview has been edited for clarity and length.

More like this
Danessa Myricks Does It All
By Parizaad Khan Sethi
Constance Wu On Self-Doubt, Family Drama, & Her Sister's Unwavering Support
By Constance Wu
Megan Rapinoe's Relaxation Hack Is Super Dreamy
By Carolyn Steber
Romance Authors Are Mobilizing For Reproductive Rights
By Natalia Perez-Gonzalez
Get Even More From Bustle — Sign Up For The Newsletter