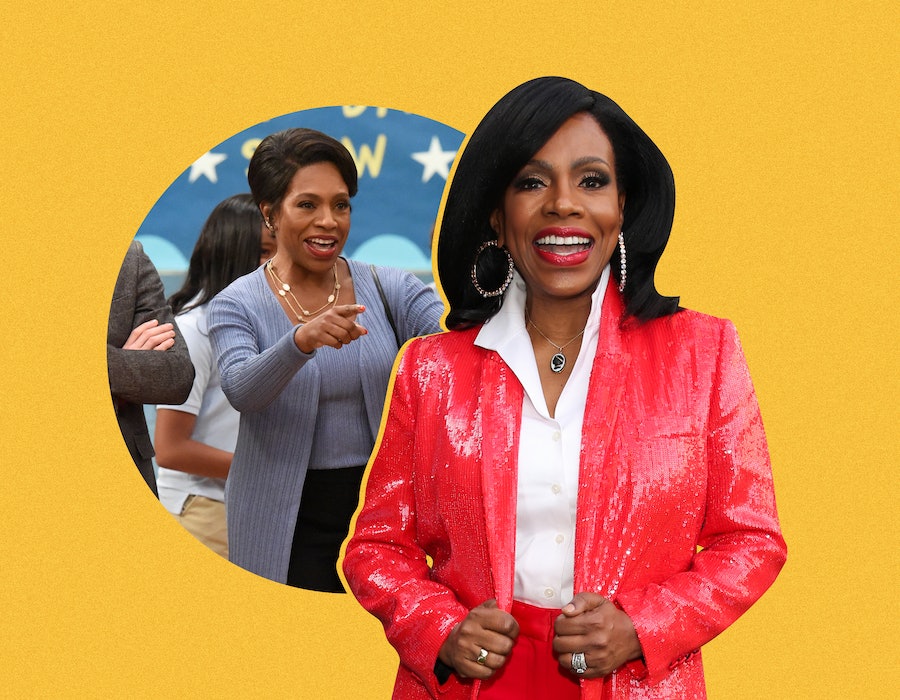 Sheryl Lee Ralph can do it all: originate the role of Deena in Dreamgirls on Broadway, pen a memoir, make history as one of Glamour’s Top 10 College Women in America … and keep a straight face when confronted with another one of Janine’s questionable outfits on Abbott Elementary. If her March appearance on The View is any indication, she could also host a talk show if she wanted to. But “they'd have to fight Abbott Elementary for my time,” Ralph tells Bustle, overjoyed at the success of the record-breaking ABC sitcom.

Though Ralph had originally intended to audition for the role of the unqualified, opportunistic Principal Ava on the mockumentary sitcom, series creator and writer Quinta Brunson had other ideas, and wrote a different character specifically for her. As the no-nonsense veteran kindergarten teacher Barbara Howard, Ralph plays reluctant mentor to Brunson’s Janine, while also acting as the school’s unofficial fashion police.

It’s the perfect role for Ralph, who as a child was committed to success and always dressed the part. Raised by the woman who designed the stylish Kariba suit, Ralph kept her head down in school and went on to become Miss Black Teen-age New York and the youngest woman to graduate from Rutgers University in 1975. “My parents kept me too busy to be getting into any kind of trouble or doing anything other than succeed,” she says.

Abbott Elementary has already been greenlit for Season 2, and like the dedicated teaching vet Barbara, Ralph says she hopes to stick around the halls of Abbott as long as the show is on the air. “I am swimming in a sea of gratitude, thankfulness, and wonderment because what is happening does not happen often,” she says of the show’s runaway success. “It is the most amazing thing that people are actually laughing, talking, and writing about the show on the regular.”

Below, Ralph talks her worst fashion fail, the value of a good education, and the books that should be taught in schools.

Quinta wrote the role of Barbara just for you and presented you with a nicely wrapped gift upon asking you to join the show. What was the gift, and what did she say to you?

Well, the gift was the character itself. The grand gift was the show itself. When I first read it, I [said], “Let me take a crack at the principal.” She said, “Absolutely not. We need a queen for this [Barbara] role, and you are that queen.” My God, this wonderful young woman! This is just amazing. And the fact that this role is inspired by her mother, a veteran of education of the Philadelphia school system, a dedicated teacher. The fact that she saw me as that queen in that role of inspiration — not just to her but to students — it's a blessing.

Which of Barbara’s characteristics are directly inspired by you? Are her fashion critiques of Janine pulled from your background, growing up with a fashion designer mom?

Absolutely. My mother was always very particular about how she sent us into the world. She said to me, “The clothes you wear are how people see you. It's what and who they think you are, so what you wear in the world matters.” So sometimes when Janine puts all those patterns together, when it looks like her shoes are just too big, and are those jelly beans on your belt? What do you have on? Part of that comes from Sheryl.

Have you ever had any fashion failures of your own?

Oh my God, absolutely. When Cynthia Erivo was nominated for the Oscar, I went to an Oscar party and looked at what I had on and I said, “Who in the world let me out of the house looking like that?” I love the color orange, and the blouse did look good, but the shell that I had around it was horrible. And the hair — what in the world made me put that wig on? I do not know. It was too short, nothing about it was right. Every time I look at it, I'm just like failure, absolute failure. Oh my God, it was horrible.

At least you haven’t had any fails since then!

Well, that's because my daughter has grown up enough to do my styling. I'm so thankful that I don't have to go out of my pocket for a stylist and that my daughter has been doing a great job the past few years. Whenever I look at her Instagram, The House Of Ivy, I'm always, “Yes, look at that. She's doing it.”

What's your favorite funny moment from the show?

It was a very different school in Connecticut, a newly integrated school where everybody was given that very wonderful education, but my parents wanted more for me. I tested out of the public school system and went to a school called Notre Dame Academy for Young Women, and that is when I started having some real life and educational lessons that have never left me.

What kind of student were you?

I had to be on top of things — I was the only little Black girl in the whole school, and they wanted to remind me that they did not need to take students like me. But I passed the test, so I deserved to be there, and that was a difficult challenge. My parents kept me too busy to be getting into any kind of trouble or doing anything other than succeeding. I didn't get into anything extracurricular ‘til I was a grown woman and well on my way toward becoming. I always had a love of adults because we could talk, so I was a very different kind of child.

On Abbott Elementary, Barbara is adamant about teaching her students how to read by using Michelle Obama’s memoir instead of a new, tech-based approach. What book do you wish was taught in schools today?

Barbara isn't tech-savvy at all, but you love Instagram and Twitter and are always interacting with fans online. What's the biggest lesson you've learned from social media?

People, when they are not seen, can be one of two things, and it's a choice: They can either be very kind and very wonderful and add greatness to the conversation, or they can be very dark and ugly and just plain rude and unkind. I just find it so sad that so many people spend so much time being rude and unkind. It's just not necessary. So many people took so much time to see [The View host] Joy [Behar] fall out of her chair. There were so many that took so much time to say, well, it was right for Black people to be barred from escaping Ukraine. People just don't know what to do with themselves and their misplaced hatred of others, and it's just awful to me.

Do you ever respond to online hate?

Very rarely, because I'm always reminded of that line in The Wizard Of Oz. Poof! Begone. You have no power here. Yes, don't mess up my vibe.

You've said the message of Dreamgirls is the triumph of the dark-skinned Black girl. If you were to look at your whole life and career, what statement do you hope it makes?

I was a lifelong student, I was a willing soldier of life, and I did well. Mission accomplished.