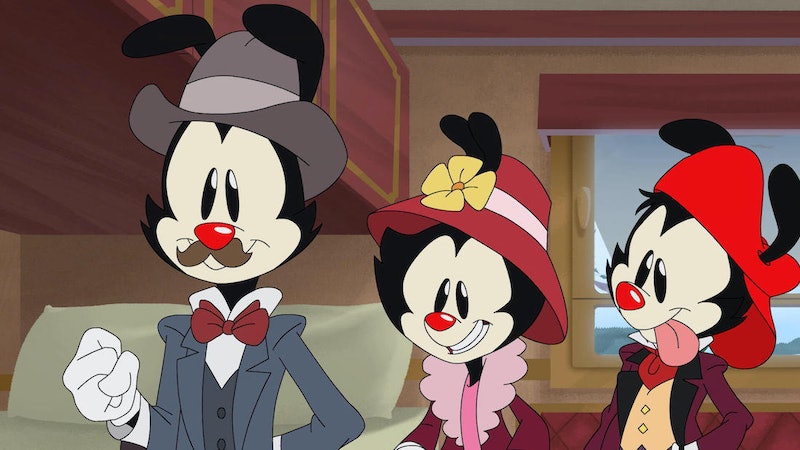 Over 20 years after the original show ended, Hulu's Animaniacs reboot is finally here, and fans will recognize several familiar voices in the cast. All three of the original Warner kids are back, with Jess Harnell reprising his role as Wakko, Tress MacNeille as Dot, and Rob Paulsen as Yakko as well as the dimwitted, big-hearted mouse Pinky and the Warners' psychiatrist Dr. Scratchansniff. Maurice LaMarche has also returned as the diabolical mouse Brain, and Frank Welker rounds out the cast as his inept security guard, Ralph. This is all great news for longtime Animaniacs fans, but even if you've never seen the show before, odds are that you're familiar with at least some of these actors' other work.

Paulsen voiced both Raphael and Donatello in the original Teenage Mutant Ninja Turtles animated series, as well as the 2012 reboot. He also portrayed Spike in the Land Before Time series, Carl Wheezer on Jimmy Neutron, and numerous other animated characters from the 1980s through today. His IMDb page lists over 500 acting credits, most of which are voice roles, so you've definitely heard him at least somewhere before.

Welker is an even more prolific voice actor, with over 800 acting credits. You almost certainly know him as Fred from Scooby-Doo, but he's also been Megatron in Transformers, Curious George in Curious George, and Nibbler in Futurama.

Tress MacNeille voiced Babs Bunny on Tiny Toons Adventures and has been Daisy Duck for over two decades, but she may be best known for her many roles on The Simpsons. On the long-running sitcom, she has voiced Agnes Skinner, Dolph, and Cookie Kwan, among others. LaMarche played Big Bob on Hey Arnold, Egon on The Real Ghostbusters, and for a number of years, he was the voice of Yosemite Sam. Harnell, like his colleagues, has hundreds of animated voice credits to his name, including the video game character Crash Bandicoot and numerous roles on Rick & Morty.

The old gang getting back together is a boon not only for fans, but for the cast as well. "It really, truly is a deeply personal labor of love," Paulsen told Entertainment Weekly of the Animaniacs reboot. "And to be able to share it with people with whom I've been to weddings, funerals, birthdays; to do it again with an audience that's exponentially larger than the first go-round? It really is beyond cool."

More like this
Pamela Anderson's Sons Brandon & Dylan Have Their Own Hollywood Careers
By Arya Roshanian
Wait, Is Barney Stinson Related To Sophie On 'HIMYF'?
By Gretchen Smail
Pamela Anderson’s Dating & Marriage History Could Be Its Own TV Series
By Jake Viswanath
The Banned 'Friends' Ad Shows Monica As You’ve Never Seen Her Before
By Sam Ramsden
Get Even More From Bustle — Sign Up For The Newsletter
From hair trends to relationship advice, our daily newsletter has everything you need to sound like a person who’s on TikTok, even if you aren’t.