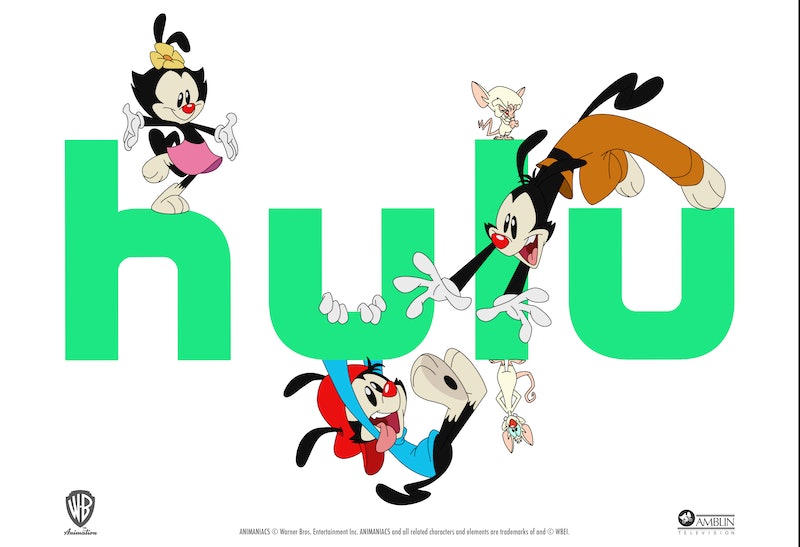 Get ready to laugh until you collapse: Yakko, Wakko, and Dot are officially bringing their "zany to the max" antics to Hulu's Animaniacs reboot on Friday, Nov. 20. "They've escaped from the water tower!" read a tweet from Hulu's official account, along with a "special message from Tress MacNeille aka Dot, the Warner sister" to announce the fall 2020 premiere date. What's more, Hulu already renewed Animaniacs for Season 2 ahead of the series premiere, with the second season set to air in 2021, TVLine revealed on Aug. 7.

In addition to the mischievous Warner siblings, the Animaniacs' 13-episode first season will also feature original characters from the classic cartoon that ran on both Fox Kids and the WB from 1993-1998. Among them: Pinky and the Brain, who are still apparently trying to take over the world. Oscar winner Steven Spielberg is co-executive-producing the animated series.

Hulu officially announced the reboot in early 2018, but IndieWire reported the series was in the works as far back as May 2017. "We cannot wait to work with Steven Spielberg and the entire Amblin and Warner Bros. teams to bring more sketches, catchphrases, songs and laughs from the Animaniacs to kids and adults everywhere," Hulu SVP of Content Craig Erwich noted in a 2018 press release. "Now one of the most beloved, inventive and funny animated franchises in history, Animaniacs and its cast of witty characters can live on, on Hulu."

The beloved cartoon is returning with new episodes 22 years after its 99th (and final) episode aired. If the reboot's first episode doesn't include a meta joke about the Warner siblings finally making it to 100 episodes, it will be shocking.

Along with Animaniacs, Hulu recently announced more original content to premiere in the fall, according to TheWrap. Eight-episode anthology series Monsterland (streaming Oct. 2) is based on Nathan Ballingrud’s North American Lake Monsters short stories and explores how "encounters with mermaids, fallen angels and other strange beasts drive broken people to desperate acts." Then, on Nov. 18, the streaming service will debut No Man's Land, a drama that dives into “the depths of the Syrian civil war through the eyes of Antoine, a young French man in search of his estranged, presumed-to-be-dead sister." Those two Hulu original series also join nonfiction offerings including the Maya Rudolph-narrated Eater's Guide to the World (Nov. 11), along with the Greta Thunberg documentary, I AM GRETA (Nov. 13).

In the meantime, '90s kids can look forward to not one, but two seasons worth of Pinky and the Brain nostalgia to share with a whole new generation.