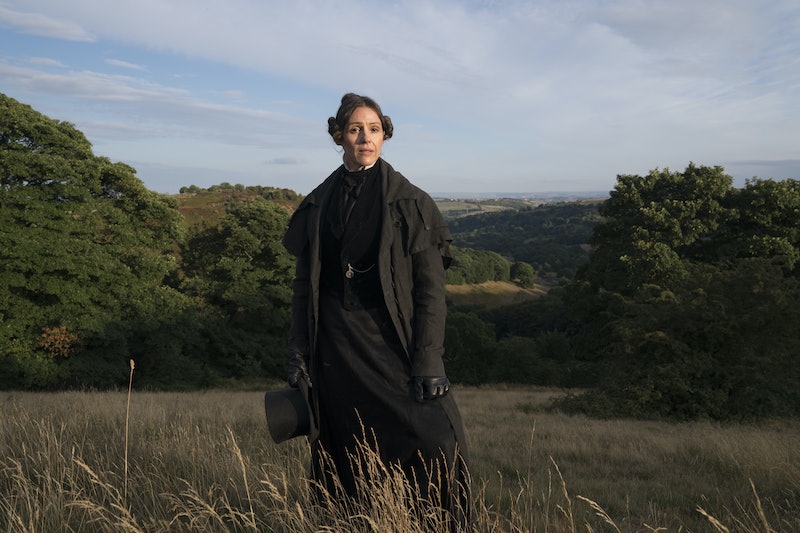 Women in 19th century England had a lot of hurdles to face — and especially those who refused to conform to the time's sexist, anti-gay values. But Anne Lister, the real person that Gentleman Jack follows, was way ahead of her time. She lived her life according to her own rules. Back for a second season after three years, Lister’s character forges a plan to “legally” reside with her lover Ann Walker. And to secretly set up as spouses in Shibden Hall, against the wishes of her bigoted family, per The Guardian.

Dubbed “one of the greatest British period dramas of our time” and “infused with 21st-century irony and northern grit”, the hugely successful — and critically acclaimed — first season gave way to a themed festival in Halifax (where the real life Lister lived), a statue, and a superfandom.

These days, Lister is usually referred to as "the first modern lesbian," according to the San Francisco Sentinel. The New Statesman reports that Lister wrote at length about her romantic relationships with women in her diaries. "I love and only love the fairer sex and thus, beloved by them in turn, my heart revolts from any other love than theirs," she wrote in one section. These diaries are regarded as "the earliest known non-fiction, first-person account of lesbian sexuality" by scholars.

Within Gentleman Jack’s second season, Lister’s character must convince all of Halifax that Walker’s (her lover) mental state is “fragile”. And that naturally, then, she must move in with her. As part of this, she must also convince Walker to combine their estates. Here, suddenly, legal talk and will writing turns into pillow talk, preluding a sex scene, per The Guardian. But, she also thinks back to her ex lover Mariana, in parts, while claiming she’s over it. Just like the first season, it’s based on accounts from Lister’s real diaries, that were written in code, per Metro.

Fans praised the second season for its queer representation and seat gripping sexual tension, right off the bat. And took to Twitter to commend its use of the fourth wall, per The Independent. Speaking to the BBC, ahead of the first season, show writer Sally Wainwright referred to Lister as a “landowner, industrialist, traveller, mountaineer, scholar, would-be brain surgeon and prolific diarist”.

Mocked for her androgynous appearance and "masculine" approach to life, she never wavered in who she was. According to the New Statesman, she educated herself so that she could conduct business on the same level as men, and she flourished in that world. The Sentinel reports that she was the first woman elected to the Halifax Literary and Philosophical Society committee, and she also ventured into the field of coal mining. Additionally, she owned a manor house, which she regularly renovated and improved. Per the BBC, as a woman, she was unable to vote — but as a landlord, she forced her male residents to vote with her interests in mind.

In her personal life, Lister was also a barrier-breaker within the LGBTQ community. According to The Guardian, she married Ann Walker at Holy Trinity church in York in 1834. Their marriage was not legally recognized, but the two women took communion together there and considered it their marriage ceremony. Now, a plaque sits outside the church recognizing Lister for her bravery and "gender non-conforming" spirit.

Suranne Jones, who plays Lister in Gentleman Jack, told NPR that she wanted to make sure she portrayed Lister's unwavering nature accurately. "Sally [Wainwright, the series creator] described her to me as having a very healthy opinion of herself, a very healthy opinion of life, excited by life, wanted to live life to the [fullest]. And she was true to her nature," Jones said. "She never wavered from wanting to, in her words again, 'love, and only love the fairer sex.' She felt like it was her god-given nature to do that."

Jones added that what makes Lister such an icon for women and for the LGBTQ community is that Lister vowed to be herself in a world where being who she was wasn't recognized or accepted. As she continued:

"She had no blueprint, there were no communities. Lesbian wasn't a word then. But she just was striking in the way that she knew exactly who she wanted to be, and pushed on and lived in that way ... I think whether you're part of the LGBTQIA community or not, Anne Lister is trail-blazing, she's life-affirming, she's uplifting, she's courageous. And she believes that everyone has a voice and deserves to be themselves and to speak. And I think in this climate, we need more stories like that."

Per Collider, Gentleman Jack chronicles just two years of Lister's courageous life. Her story started long before the series did, and the affects of her bravery and individuality will continue long after.

This article was originally published on April 22, 2019