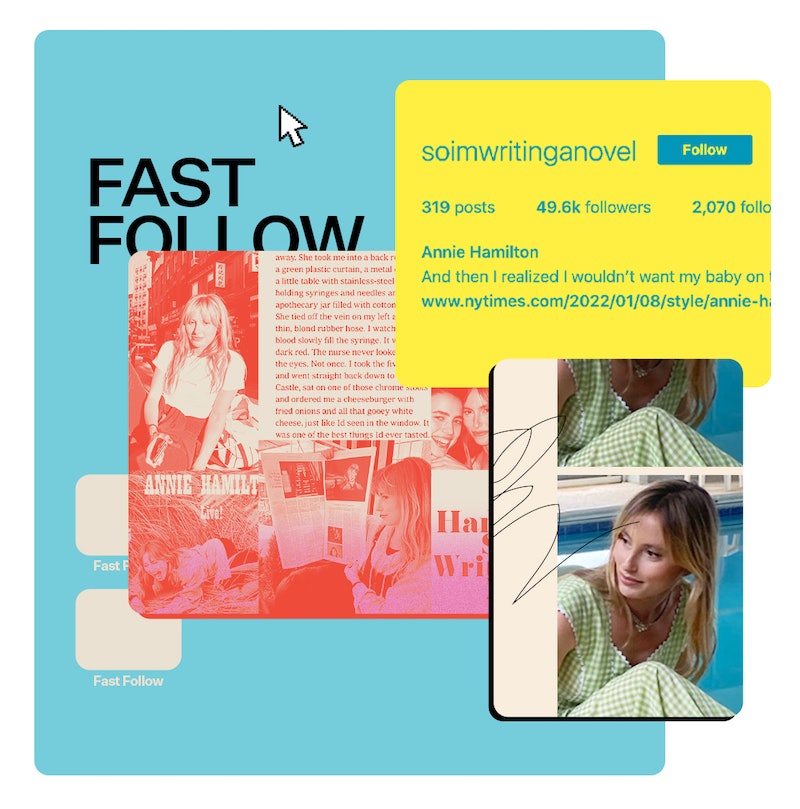 Annie Hamilton is not writing a novel. That might come as a surprise to the nearly 50,000 followers of her Instagram account, @soimwritinganovel. “I was dating a ‘has been’ actor and then I ghosted him,” Hamilton, also an actor, tells Bustle in an attempt to explain her social media handle. “Then he texted me out of the blue six months later saying, ‘I’m writing a novel.’ I thought it was the funniest thing I’ve ever seen, heard, or read, so I made it my handle.” Part outrageous, part disarmingly personal — these are the kinds of stories that draw fans to Hamilton’s account, where she shares unsuccessful self-taped auditions alongside her misadventures in dating.

Though Hamilton’s Instagram has brought her much acclaim — The New York Times recently dubbed her “Cinderella by way of Cassavetes” — the 29-year-old was relatively late to the game. She didn’t have a public account until 2017, when her then-boyfriend persuaded her to make one to help promote a film they collaborated on by buying her 4,000 followers. “I was so against it. I thought that I would be selling out even though I had nothing to sell out from,” she says. “I thought that I would not be cool on it and it terrified me that I would never get the right followers.”

Initial apprehension aside, Hamilton is now “deeply online and intertwined with the internet.” Social media is where she showcases her signature screwball sensibilities (see: this video of her “intimidating my peers w my Process”) and toys with the line between fact and fiction (her Twitter bio reads, “Like all art, there is Great truth to my tweets, but also keep in mind it is ART & a SHOW & not to be mistaken for anything else!).

Lately, her online persona has even become the impetus for her art offline. Hamilton is currently in residency at New York’s The Jane Hotel, and her next performance will be an adaptation of a recent tweet outlining the “trajectory of me dating someone (who I shapeshift into chronologically).” “I quite enjoy humiliating myself, so there is going to be a bar filled with people watching a live stream of me in a hotel room [with someone] and I will perform the experience of meeting me to breaking up within 10 minutes,” she says. Sure, the concept is outrageously personal. But would it be a true Annie Hamilton joint if it wasn’t?

It’s not Wikipedia, but I googled “famous beautiful women with no children” after trying to cook dinner for the first time in three years and burning everything instead.

“I just need to know what will be included before it’s released because some of the stuff I said I shouldn’t have said because it could have legal repercussions. Some of it is tied up into legal cases that were settled. I got trip happy. I got carried away in the thrill of improvising but I need to be assured I know exactly what’s being put into the final cut.”

I bought an alarm clock and electric hair curlers because I kept getting blowouts too much so I needed to take matters into my own hands. I read a New York magazine article where Debi Mazar recommended curlers, so I bought them.

I’m always writing fan letters, I’m always asking people out. Sometimes I’ll do the thing where you post the Q&A box and some asked me, "Who are you most jealous of?" I said, “Odessa Young.” This was two years ago and then we started FaceTiming all the time over quarantine. It really started off as a genuine jealously that turned into admiration and now a true friendship.

Has anyone ever slid into your DMs?

I have an awful theory that only mentally unwell people have crushes on me so my DMs are really twisted. People ask me for love advice a lot. It’s funny that people ask me how they should deal with their relationships because I have no idea how to deal with mine. I’ve been single for three years, but I welcome the questions.

More like this
Annie Rauwerda Finds Treasure In The Depths Of Wikipedia
By Chloe Foussianes
Jameela Jamil Defends Sam Smith After Trolls Body-Shamed Them
By Jake Viswanath
Britney Spears Shared The Real Reason She Shut Down Her Instagram Account
By Brad Witter
Blake Lively Is Trolling Ryan Reynolds Again – Over Wrexham FC
By Sam Ramsden
Get Even More From Bustle — Sign Up For The Newsletter
From hair trends to relationship advice, our daily newsletter has everything you need to sound like a person who’s on TikTok, even if you aren’t.