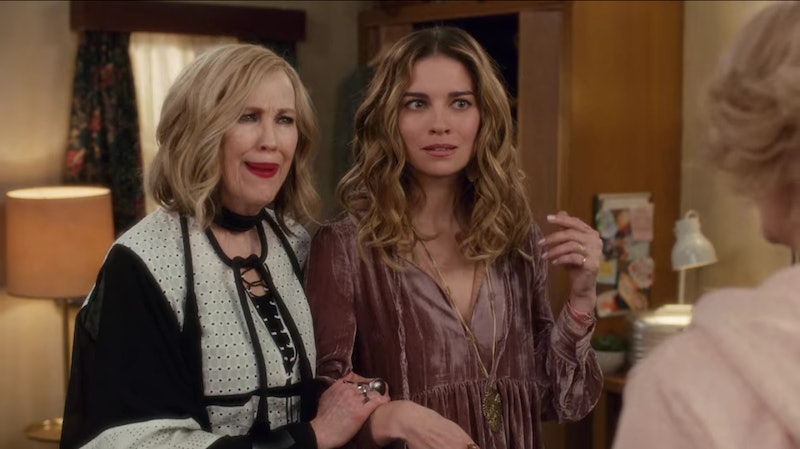 The last episode of Schitt's Creek aired in April 2020, but it's not too late to take home a piece of show history. Annie Murphy is auctioning off an iconic item as a charity fundraiser. Up for auction is a paper plate with the original lyrics to "A Little Bit Alexis," the eponymous theme song to the reality show her character starred in as a teenager. In the Season 5 episode "The Hospies," Alexis memorably uses "A Little Bit Alexis" to audition for a local musical production of Cabaret.

On Saturday, Murphy posted a photo of the plate on Instagram, revealing that she used it to record the catchy track in the studio. "What do you do when you're recording a song at @banquetsound where apparently @nixonboyd doesn't believe in paper, but does believe in pens?" Murphy wrote. "You write your lyrics on a paper plate and take that into the vocal booth with you." The Emmy winner added that the item — "in all of its paper platey glory" — was crucial to the process "because my brain is old and full of holes."

The Schitt's Creek star confirmed that half the funds from the auction will be donated to Eva's Initiative, an organization that provides shelter, housing, and support for unhoused young people between the ages of 16 and 24. The other half will go to a charity that has yet to be determined, but Murphy says it is one they will "decide upon like a couple of mature adults." As of Sunday, bidding was up to $6,000, according to Schitt's Creek creator and star Dan Levy, who posted an Instagram story about the "iconic plate."

Last week, Murphy also auctioned off her first red carpet dress, using the proceeds from the first auction to raise money for Toronto's Encampment Support Network, according to ET Online. The actor joked in an Instagram post that there "might be anxiety sweat in the armpits, but there are pockets in the dress, so it balances out." In another post several days after the auction began, Murphy revealed that the dress had sold for $7,000.

Ironically, the bidding for Murphy's paper plate is nearing the same value as the red carpet gown. The auction's success speaks to the lasting power of Alexis Rose's reality television anthem, showing that Schitt's Creek fans are eager to own a la-la-la-la little bit of Alexis.

More like this
Here’s Everything Coming To & Leaving Netflix In February
By Jake Viswanath
At 28, Debra Jo Rupp Was Living A Much Different '70s Show
By Grace Wehniainen
'GoT' Star Emilia Clarke Says She "Just Can't" Watch 'House Of The Dragon'
By Brad Witter
Raven-Symoné Addressed Fan Pushback To Her Name's Actual Pronunciation
By Stephanie Topacio Long
Get Even More From Bustle — Sign Up For The Newsletter
From hair trends to relationship advice, our daily newsletter has everything you need to sound like a person who’s on TikTok, even if you aren’t.