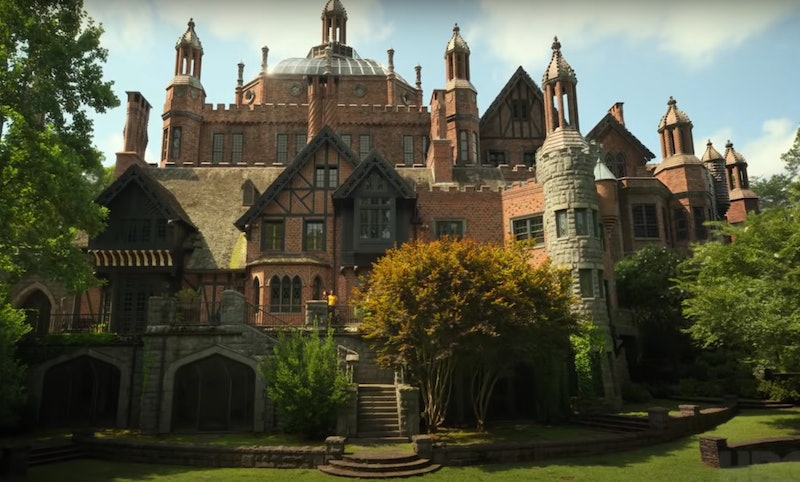 Spoilers ahead for the Lovecraft Country Season 1 premiere. Though Atticus, Leti, and George encounter plenty of actual monsters in Lovecraft Country, it's the whole Ardham township that looms ominously over the first episode. Of course, Ardham isn't a real town; it's a carryover from Matt Ruff's 2016 novel, upon which the show is based. But it's also a sly reference to a similarly sinister location in H.P. Lovecraft's original novels.

Atticus, nicknamed Tic, first learns of Ardham when he receives an unusual letter from his father Montrose, who calls him back home despite being missing for two weeks. In the letter, Montrose claims to have discovered where his wife's family is from: a place called Ardham, where Tic has a "secret legacy, a birthright" that's been kept from him.

The name Ardham sticks out because Tic first misreads Montrose's messy handwriting as "Arkham," a fictional city that repeatedly appears as the main setting in H.P. Lovecraft's spooky tales, which Tic guiltily enjoys reading. In the Lovecraft Country book, Tic describes Arkham as "the home of the corpse re-animator Herbert West, and the location of Miskatonic University, which had sponsored the fossil-hunting expedition to the mountains of madness." (If Arkham sounds familiar, Arkham Asylum in the Batman franchise draws its named from the same town.)

"Lovecraft based [Arkham] on Salem, but it’s not a real place," George tells Tic in the book. He then points out that Montrose actually wrote "Ardham," which, in the book, is a small town of only about 250 people that's near the New Hampshire border.

Once George notices that Ardham is in Devon County, he muses that "maybe this Ardham is in Lovecraft Country after all." A grim reaper and a sundial are sketched over the area on their map, marking it as an aggressively racist county that poses just as much danger to them as Black travelers as a beady-eyed shoggoth would to a Lovecraft protagonist.

The grim reaper proves to be an apt image, as does the name Lovecraft Country. When Tic, Leti, and George head to Ardham, they're accosted by a group of racist sheriffs, who march them into the forest and claim it's their "legal duty" to kill them after sunset. It's a chilling scene of police brutality stopped only because a group of vicious creatures pop up and kill all the sheriffs before being called away by a mysterious whistle. Shell-shocked, the trio stumble to Ardham lodge, where a blonde, blue-eyed man opens the door and suspiciously welcomes Tic home.

The quiet genius of Ardham is that it functions as a meta commentary on Lovecraft, a virulent racist who would never have centered his stories on Black protagonists. Tic's experiences in Ardham are a way to both pay homage to and subvert Lovecraft's work. Like Arkham, Ardham also has literal beasts roaming around; in the world of Lovecraft Country though, sometimes the scariest monsters are those that hide behind a human smile.