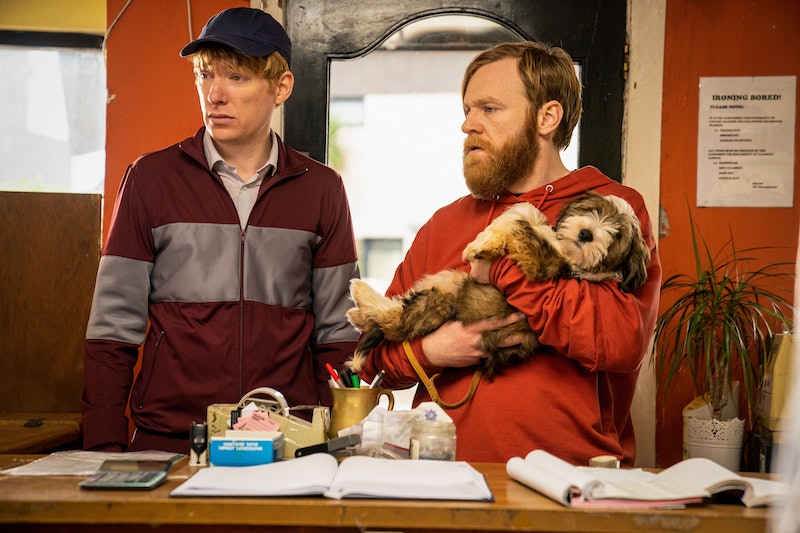 From the producers of Catastrophe, Channel 4’s latest comedy Frank of Ireland centres on the hilarious story of a struggling musician as he attempts to get his life in check. The cast of the new series includes actor Domhnall Gleeson, who co-wrote and stars in the comedy alongside his real-life brother. So, what is there to know about Domhnall Gleeson’s brother, Brian Gleeson?

Brian Gleeson is an Irish actor, who viewers might recognise as Jimmy McCavern from the BBC’s Peaky Blinders. Per NME, he is the younger brother of Domhnall Gleeson (HBO’s Run, Star Wars: The Force Awakens, and Harry Potter, to name a few), and the son of BAFTA-nominated actor Brendan Gleeson of Harry Potter (he played Alastor Moody) and Braveheart fame. Speaking to the Irish Independent back in 2016, Brian revealed he did not attend any acting or performing arts schools as a child, instead opting to learn his craft on the job. The actor’s first on-screen role was in the 2006 film The Tiger’s Tail, in which he starred opposite his father.

As stated on his official portfolio, some of Gleeson’s most notable film and television credits include the 2016 sci-fi epic Assassin’s Creed (in which he portrayed the younger version of his father’s character), the 2017 psychological horror Mother! starring Jennifer Lawrence, Channel 4’s 2018 comedy The Bisexual, and much more. Elsewhere, Gleeson boasts a string of impressive theatre credits — he was previously nominated in the Best Supporting Actor category at the 2015 Irish Theatre Awards for his performance as Sean in Enda Walsh’s The Walworth Farce, the Irish Times reports.

As mentioned, Brian Gleeson’s latest role is in Channel 4’s brand new comedy Frank of Ireland, in which he stars alongside his brother, Domhnall. The series will also premiere on Prime Video in the U.S., Canada, and Australia on April 16.

As the Radio Times reports, Frank of Ireland is set within an idyllic suburb of Dublin, and tells the story of thirty-something Frank: a struggling and unmotivated musician who is still living at home with his mother. Throughout the comedy, Frank hilariously attempts to get his life on track with his slightly more sensible wingman by his side.

Speaking ahead of the show’s debut, Fiona McDermott, head of comedy at Channel 4, said the broadcaster is “delighted” to welcome the Gleeson brothers to Channel 4 for their comedy debut. “They are talented in ways Frank and his wildest dreams could only hope to emulate; we can’t wait for viewers to see the unashamedly ridiculous and hilarious new show they’ve created,” McDermott commented.