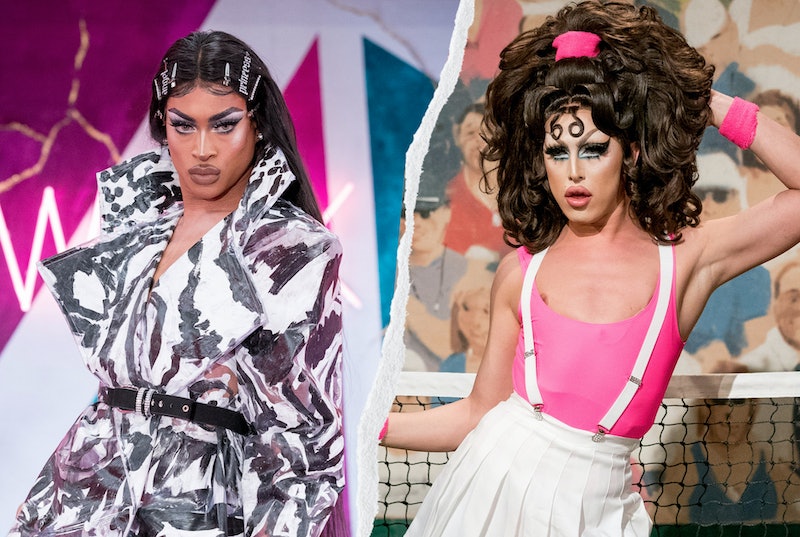 In early episodes of the Series 2, fans of Ru Paul’s Drag Race UK may have noticed a little light flirting going on in the werk room between two of the contestants — Welsh wonder Tayce and fashion queen A’Whora. What everyone is dying to know is, are Tayce and A’Whora dating, have they dated in the past, or are they just joking around? Let's dig into what we know so far.

During episode two's mini-challenge, the Series 2 queens had to vote for each other in different categories: Secretary of Shade (winner: A’Whora), Cockiest Queen (Lawrence Chaney), and Baroness Basic (Tia Kofi). The final category was Trade Minister (i.e the hottest person out of drag) and it was Tayce who won the illustrious title.

During the voting, we cut to A’Whora, who tells producers “Trade Minister? Tayce. That's why I already had it.” For lots of viewers, this seemed to be confirmation that the two have hooked up in the past.

Later on in the werk room, A'Whora admits to Tayce that she voted for her in the Trade category, and Tayce quickly responds saying she voted for A’Whora in return. “Well, you know, we vote for what we're used to,” A'Whora says. “Don’t bring the past into this,” Tayce replies coyly, leading many fans to speculate further about their relationship.

Cut to their interviews with the producers and the two queens are both blushing as they're asked about one another. Tayce says “I know what you're thinking and it's not what it seems. We just know each other very... well.”

Since the queen’s return to the show after a seven-month coronavirus-related break, one queen still had a few cheeky digs for the pair in the werk room. In Episode 5, Lawrence Chaney asks Tayce, “how’s that sexual tension?” to which Tacye replies, “Oh my god Lawrence you need to wind your neck in girl!” And of course, Lawrence continued dishing out the laughs. “For 7 months I’ve been writing all the fan fiction you could imagine over you two,” Lawrence Chaney jokes.

What we do know is A’Whora and Tayce live together and have performed together in the past. In episode 5 the two confirmed they had moved in with each other during the seven-month hiatus from the show. Andt the end of 2020, A’Whora posted a festive shoot by their joint Christmas tree with the caption "sending all the love from our haus to yours, now deck those halls!!" And even more recently, the pair were spotted by fans on a walk in London together jumping for joy and fangirling over a Drag Race UK billboard.

It’s clear these two aren’t afraid to stir up a little drama outside of the show – and we love them for it. In a recent Gay Times interview, A’Whora and Tayce made some pretty bold statements about the calibre of this year's Drag Race UK queens in comparison to last year’s. “I don’t think any lip-sync from the last season is on par with the worst of our lip-syncs of this season. Their best is our worst,” A'Whora told the interviewer.

While it’s still not 100% confirmed whether Tayce and A'Whora have dated, hooked up, or are just giving us some on-screen romance for the fun of it, it’s clear these two go way back and have a lot of love for each other.