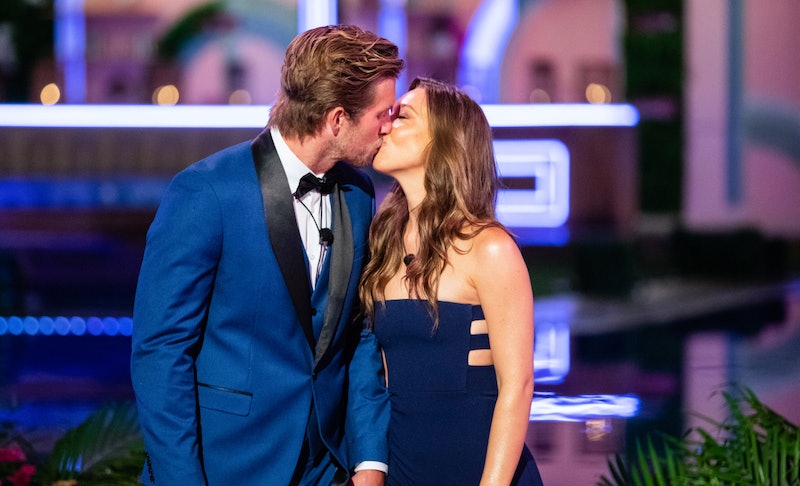 Even though they didn’t win Season 1 of Love Island, Alexandra Stewart and Dylan Curry left the show a happy pair. Unfortunately, the honeymoon stage didn’t last long, Alex says, because she broke her jaw a month after returning home.

“We were one of the very few [couples] that kind of got thrown into real life, real quick,” she says, referring to her injury. “He was amazing with me when I broke my jaw, [but] that kind of takes a huge toll on people, especially when you have like, a new relationship, it's just not something normal.” Bustle reached out to Dylan for comment but did not receive a response.

In late November 2019, they both shared statements on their Instagram Stories announcing their breakup, per E! News. "Alex and I are no longer together," Dylan wrote. "Sometimes it just doesn't work out." Alex’s was similar, reading: “Heartbreak is hard. Our story was a Fairytale romance for me, but sometimes things just don't work out."

Alex says they tried to work through their differences, but “it was just better that we were friends.” She adds, “We still check in on each other, and I wish him the best. I don't know much about his life right now.”

Despite the global pandemic making it “the worst possible time” to date, Alex has managed to see “a couple of people that, you know, tickle my fancy” since her breakup. But she’s not planning on sharing those relationships with the world anytime soon.

“It's so crazy being thrown into the spotlight and having so many people have eyes on your relationship and making assumptions,” she says, mentioning that her Instagram followers are expert lurkers who want to know everything. “So I've kind of put that on the side burner, where I'm not really sharing any names or pictures of anyone.” At least not until the time is right.

Until then, she explains that what she’s looking for in her next relationship has changed since being on Love Island. “Being thrown into such an incredible and weird atmosphere has definitely opened me up to wanting someone who’s extremely open, and just forward about their feelings,” she says. “The games are not for me anymore.”