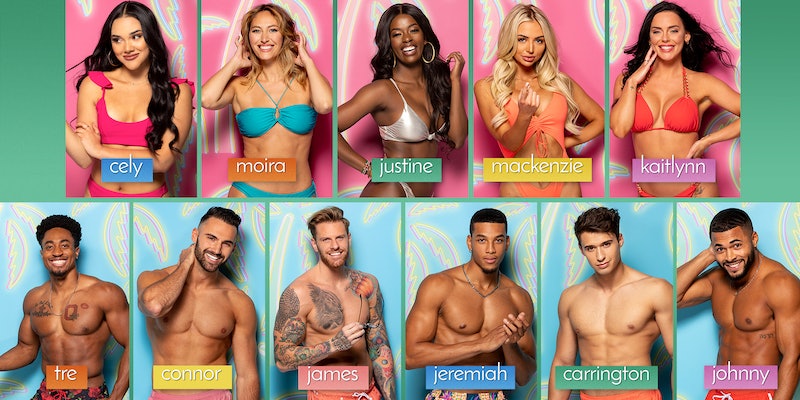 One week before the new season of the reality series premieres, CBS announced the Love Island Season 2 cast, introducing a new cohort of singles who will attempt to find love and compete for a $100,000 cash prize. Eleven singles will be introduced as "Islanders" during the two-hour Season 2 premiere on August 24, including several personal trainers, a shopping channel model, a legal secretary, and an auditor. The Islanders have spent the past couple months virtually dating due to the COVID-19 pandemic, but the new episodes will be filmed in-person in a closed "bubble" in a villa in Las Vegas, as per a press release.

Love Island USA is based on the British show of the same title, in which a group of "Islanders" is brought together in a secluded location, and must attempt to win each other over and impress audiences at home. In order to continue in the competition, each cast member must be coupled with another contestant, whether out of "love, friendship, or survival," and every few days uncoupled Islanders will be at risk of being dumped from the island. The real drama, however, comes when new contestants arrive on the Island, disturbing alliances and romances, raising the stakes throughout the season. Additionally, contestants will have to win over viewers, who, according to a press release, will "shape events on screen and ultimately crown one lucky couple the winner." Audiences will also be able to participate in crafting the show and creating drama via the Love Island app.

Find out more about the first eleven cast members of Love Island Season 2 below:

Fun Fact: Kaitlynn's dating profile "About Me" section would be short and sweet: “I enjoy bad food, dogs, festivals, Pilates, cooking and adventure!”

Fun Fact: Her celebrity crush is Oscar-winner and "alright, alright, alright" enthusiast, Matthew McConaughey. According to a press release, Mackenzie called the actor “a version of my dream man — a southern gentleman with a Texas accent.”

Fun Fact: His celebrity crush is the pop star and makeup mogul Rihanna, so it's appropriate he's going into the series with "Love On the Brain."

Fun Fact: This humor enthusiast's "ideal romantic partner" is someone who is "funny, likes to laugh, and doesn't take life too seriously."

Fun Fact: Her partner will need to be tall since she spends, "80% of her time in heels." Additionally, she's looking for someone who is both, "humble and respectful."

Fun Fact: If he could write his own dating profile, he would write, "If dating was a sport, I have been a free agent for a while. Dare to get to know me and you will see I am smart, genuine, nice, and sexy at the right times.”

Fun Fact: He's "brainy" and "loves karaoke," and is ready to hit the dance floor at the villa, as he has been, "has been working on his dance moves in quarantine."

Fun Fact: Cely is ready to bring the enthusiasm to the show as the former "captain of her high school cheerleading team." She's also well-rounded, as she is, "fluent in Spanish, loves to sing, and plays guitar."

Fun Fact: He's a self-proclaimed "flirt" who "grew up on a farm." He's hoping his time on the show will lend the opportunity to, "show that special someone his southern hospitality."

Tune in to find out which of these singles will decide to couple up, and who will have the kind of bond that can take them all the way to winning the cash prize. Love Island USA premieres on CBS on August 24.

More like this
Everything We Know About Gemma & Jacques’ Relationship – & Break-Up
By Frances Stewart
Twitter Has *Many* Thoughts On Amber & Ikenna’s Dumping From ‘Love Island’
By Frances Stewart
The 'Love Island' Contestants *Do* Know Who Gemma's Dad Is, After All
By Bustle UK
Bachelor Nation's Blake Horstmann Is Dating 'Love Is Blind' Star Giannina Gibelli
By Jake Viswanath and Radhika Menon
Get Even More From Bustle — Sign Up For The Newsletter