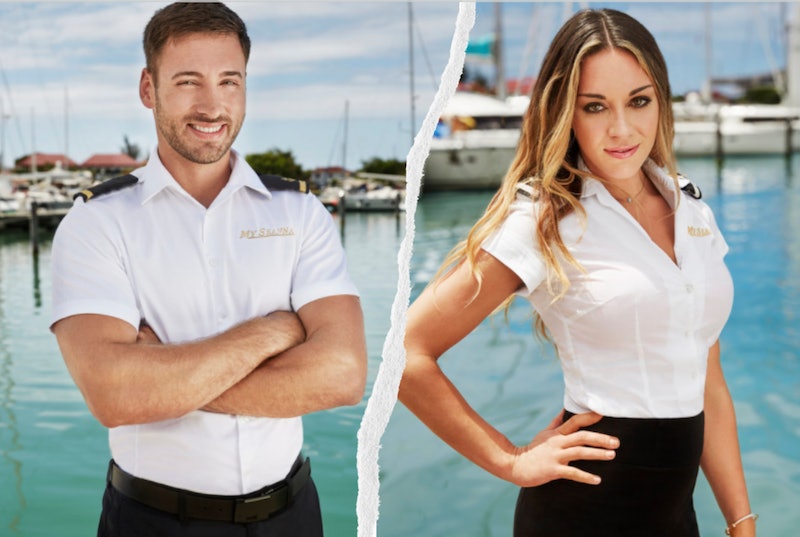 Elizabeth Frankini and James Hough's "boatmance" hasn't exactly been smooth sailing on Below Deck. So it should come as little surprise that the two don't seem to be together after the show. Case in point: after host Andy Cohen asked Elizabeth during a Jan. 18 Watch What Happens Live segment if she regrets becoming "romantically involved" with James, the stew simply responded, "Yes."

Reflecting back on the fight between her and James that recently aired, Elizabeth pointed out that she did defend him when chef Rachel Hargrove maligned his character, even though he asserted she didn't the next morning. "I did stick up for James, if you watch the episode. I did," she told Cohen. "I will always stick up for him."

Elizabeth also clarified the scene in which she told everyone that she and James were getting married. "If you guys knew the context, he couldn't come to the U.S., so I was saying it as a joke," she said, later adding on Twitter that Below Deck failed to explain "some legal issue" that prevented the U.K.-born James from traveling stateside. "Andddddd that's what it's like dating a foreign guy," she wrote. "You will always end up drunkenly considering getting married for a green card."

The pair's other social media activity further suggests they've parted ways since filming. Elizabeth's most recent Instagram posts were uploaded from Colorado, while James seems to be spending his time in the U.K. with friends. Still, they appear to be on decent terms, considering they both follow each other on Instagram and that Elizabeth tagged James in a Jan. 25 throwback from their time in Antigua.

Fans will likely have to wait to see why Elizabeth and James split, but they're hardly the first Below Deck couple to run their boatmance into the ground.

More like this
All The Clues Clint & Gina Aren’t Still Together After 'MAFS' Season 16
By Brad Witter
Mack & Domynique Reportedly Had An "Epic" Breakup On 'Married At First Sight'
By Brad Witter
Shaq Might've Spoiled His Relationship Status With Kirsten After 'MAFS'
By Brad Witter
Airris From 'MAFS' Says He Doesn’t Regret Going To Decision Day With Jasmine
By Brad Witter
Get Even More From Bustle — Sign Up For The Newsletter
From hair trends to relationship advice, our daily newsletter has everything you need to sound like a person who’s on TikTok, even if you aren’t.