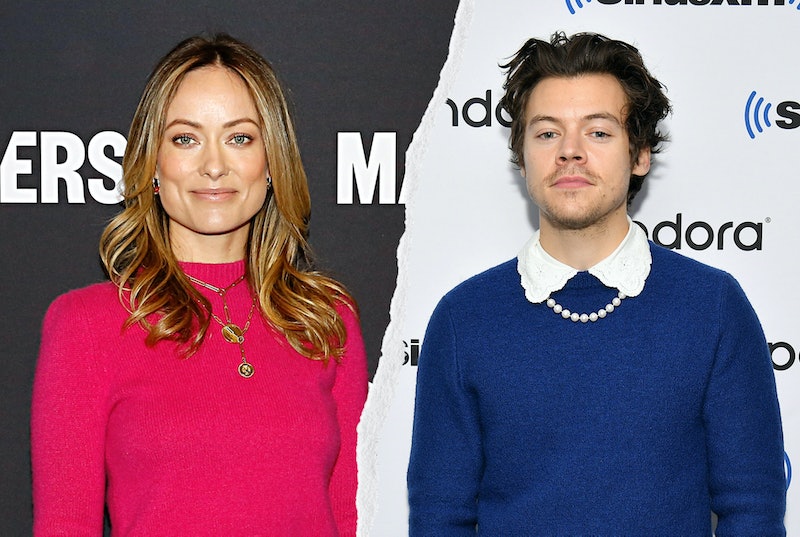 When Page Six published photos of Olivia Wilde and Harry Styles holding hands on Monday, Jan. 4, everyone seemed to have an opinion on whether the pair was 2021's first new celeb couple. The PDA took place at San Ysidro Ranch in Montecito, California, where they attended a friend’s weekend wedding together, according to People, and it sparked speculation about their relationship status. Talk hasn’t died down since, especially not after they were spotted looking “completely smitten” at a London pub on April 14.

The two dined outside in west London and looked “very cosy” together, per a source for the Mirror. The witness also noted that the two “were grinning like Cheshire cats at each other all night,” with Wilde at times stroking the former One Direction member’s leg under the table. The stars are said to be staying together in Styles’ London home together, according to the Daily Mail.

The duo, who have also been photographed at Styles’ Los Angeles home and out and about with friends in Santa Barbara, recently worked together on Wilde’s Don’t Worry Darling film, which, according to Page Six, was how they first struck up a romance. According to the outlet’s source, Styles has been introducing Wilde — who split from her longtime partner Jason Sudeikis in early 2020 — as his “girlfriend.” They’ve also reportedly been spending time alone at late-night host James Corden’s house, who’s been a longtime friend of the singer.

At the time they were first linked, a source told People that Wilde and Styles had been dating “for a few weeks,” noting they were “affectionate around their friends, held hands and looked very happy” at the wedding. Additionally, the outlet reported that the two spent long hours on set together. And while the general public didn’t see their rumored relationship coming, the actor did gush over Styles in a November interview with People. Wilde told the magazine she “did a little victory dance” when she learned the “Watermelon Sugar” singer would be replacing Shia LaBeouf in the 1950s-set thriller she directed.

“To me, he’s very modern and I hope that this brand of confidence as a male that Harry has — truly devoid of any traces of toxic masculinity — is indicative of his generation and therefore the future of the world,” the mom to Otis, 6, and Daisy, 4, told the magazine. “It’s pretty powerful and kind of extraordinary to see someone in his position redefining what it can mean to be a man with confidence.”

Even as the coupling may have come as a surprise to some, those on the set of Don’t Worry Darling maintained that they weren’t shocked by the news. An insider told People on Jan. 6 that their chemistry was “very obvious.” The source said, “During breaks in filming [Harry] wasn’t able to stay away and would visit her trailer.” But despite their “budding romance,” the two kept things professional. “Everyone loved working with them,” the insider added. “She takes her work very seriously, but everyone saw it coming.”

Although some people on Twitter who share that same admiration for the pop star are sad that he may be off the market, others couldn’t ship him and Wilde fast enough.

Regardless of the reaction, this reported couple has given fans a lot to think about.

More like this
Olivia Wilde Calls Out Ex Jason Sudeikis Amid Fraught Custody Battle
By El Hunt
Brad Pitt’s Recent Dating History Includes A German Model
By Brad Witter
Who Is Camila Cabello Dating? She's Getting Cozy With Lox Club CEO Austin Kevitch
By Radhika Menon
Kanye West Has The Most Kanye Reaction To Kim Kardashian & Pete Davidson's Split
By Jake Viswanath
Get Even More From Bustle — Sign Up For The Newsletter