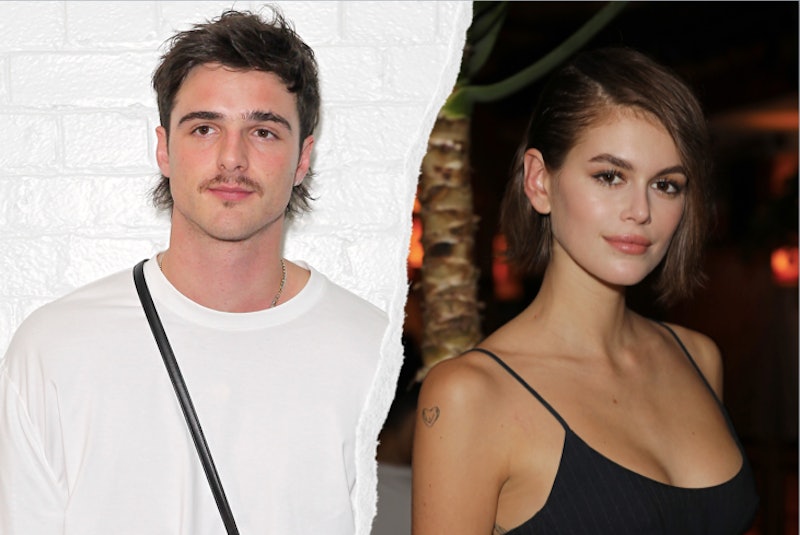 Euphoria fans eagerly waiting for signs of Zendaya and Jacob Elordi's rumored relationship might want to sit down for this. Over the weekend, Jacob Elordi and Kaia Gerber sparked dating rumors online, after a photo went viral of the duo reportedly holding hands while out in New York City on Monday, Sept. 7. Another photo showed the two sitting together in a park, enjoying some masked fun. Bustle reached out to representatives for Elordi and Gerber for comment, but did not receive an immediate response.

Speculation about the potential couple first started after Elordi and Gerber were previously seen going to dinner together in Malibu on Sept. 1, just two days before her 19th birthday. And now that speculation has gone bi-costal. After the photo of them in NYC spread online, fans took to social media to discuss the new potential Hollywood couple, with some excited and others, not so much. However, it seems that there might not actually be anything to dish about.

After their dinner in Malibu, a source told E! News that Elordi and Gerber are only good friends, and have been for a while now — even though one of them is reportedly wanting to be more than that. "Jacob definitely has interest in dating Kaia, but there is nothing serious going on there," the source claimed. "Kaia is keeping things friendly for now but there is flirtation between the two. She has told friends she is single and is only having fun and hanging out with people." The source continued, saying that, dating or not, Elordi and Gerber have gotten quite close. "They both have very chill personalities and similar interests," the source claimed. "Jacob makes Kaia laugh and her family adores him."

Prior to being spotted with the model, Elordi was linked to his Euphoria co-star Zendaya, as they were photographed multiple times together before the world went into quarantine in March. Gerber was also linked to fellow model Cara Delevingne after the pair got matching "solemate" tattoos, but the speculation fizzled out quickly and was never confirmed.

More like this
Daryl McCormack Has A Very Special Lady In His Life
By El Hunt
Everything You Need To Know About Kanye's Post-Kardashian Dating Life
By Bustle Editors
Pamela Anderson’s Dating & Marriage History Could Be Its Own TV Series
By Jake Viswanath
Meghan Trainor & Daryl Sabara Are Expecting Their Second Baby
By Jake Viswanath
Get Even More From Bustle — Sign Up For The Newsletter
From hair trends to relationship advice, our daily newsletter has everything you need to sound like a person who’s on TikTok, even if you aren’t.