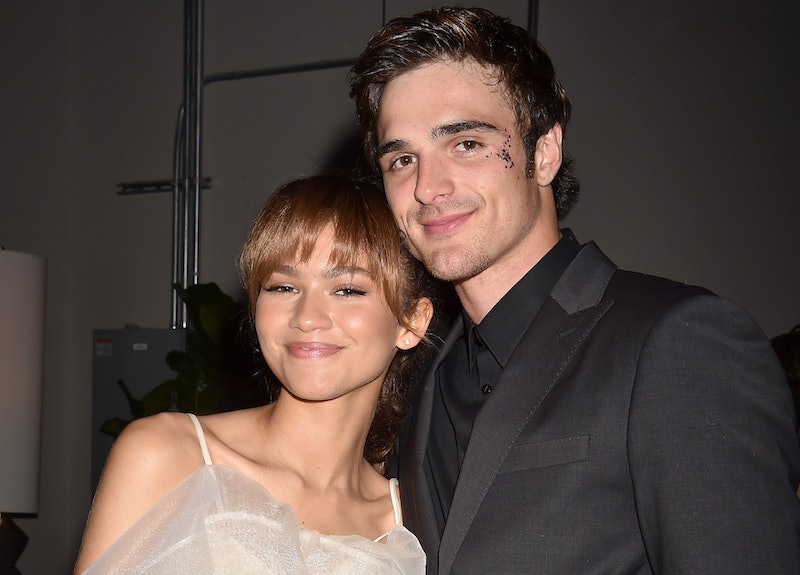 “Are they or aren’t they?” appears to be the number 1 question when it comes to Zendaya and Jacob Elordi’s relationship — so, a timeline that breaks down their “friendship” is definitely required intel for fans trying to figure it out. The actors star opposite each other as high school classmates Rue Bennett and Nate Jacobs, respectively, in the HBO series Euphoria. And ever since the show premiered in June 2019, rumors of a Zendaya and Elordi romance have been unstoppable.

Zendaya and Elordi have never flat out confirmed their relationship, but Euphoria fans are nonetheless convinced that the two are together. The two were first linked in August 2019, after a tourist in Greece shared a photo of himself on Instagram at the Acropolis of Athens — Zendaya and Elordi visibly spotted in the background. E! News reported that the two were joined by Law Roach and Darnell Appling, Zendaya’s stylist and friend and assistant, but the joint vacation still sent fans into a frenzy. Romance rumors reached a fever pitch when Zendaya and Elordi were spotted getting cozy (is that a kiss? It looks like a kiss) in New York City in February. But their exact status remains a mystery. So, to help figure it all out, here's a timeline of Elordi and Zendaya's "friendship," from vacation photos to public smooches.

August 2019 — Spotted on Vacation Together in Greece

In the vacation photos that broke the internet, the co-stars were spotted at the Acropolis of Athens in a now-deleted Instagram post from a tourist on Aug. 30. The Instagram post isn't the only receipt of the two. Various Twitter users shared (now-deleted) pictures of Zendaya and Elordi posing with fans at the Kaiki Beach Club one day prior.

The Australian actor seemingly squashed all romance rumors when he likened Zendaya to a "sister" in an interview with GQ Australia. Elordi added that the Euphoria cast as a whole was very close. "Zendaya is an amazing creative, you know? She’s super dope to work with,” he said. “She’s an incredible artist and a very caring person to all of us. But we’re all really close. There is not one weak link in that show. We’ve spent so much time together and everyone is just so cool to work with.”

Following his "sister" comments, Zendaya presented Elordi with a Rising Star honor at the American Australian Association Arts Awards in New York City on Jan. 30. During her speech, Zendaya called Elordi her "best friend," according to various outlets, suggesting that they were firmly in the friend zone.

By the next month, dating rumors reached a fever pitch after the two were spotted out and about in SoHo in New York City. The two visited a cafe and a bookstore, and in a photo captured by photographers, Elordi leaned in close to his co-star and seemingly gave her a kiss. At that time, a source told E! News that the two had "been seeing each other for months now" and had "been inseparable since last summer."

February 2020 — Spotted at a Grocery Store in Los Angeles

Shortly after their joint New York City trip, Zendaya and Elordi were spotted at a Ralphs grocery store in Los Angeles on Feb. 19. She reportedly had a box of Samoas Girl Scout cookies under her arm as she strolled the store with Elordi, per Entertainment Tonight, and even snapped a photo with a fan.

February 2020 — Spotted at the Sydney Airport

In the wake of their Ralphs trip, Zendaya and Elordi were photographed on an airport buggy together at the Sydney Airport in Elordi's home country of Australia. The two looked casual and cozy in hoodies, sweatpants, and sneakers.

March 2020 — Spotted at a Flea Market Together in Los Angeles

On March 8, Zendaya and Elordi were spotted a flea market in Los Angeles perusing the vintage finds. Zendaya's mother, Claire, also reportedly joined the two for the three-hour outing, according to Just Jared. A source previously told E! News that Elordi had met Zendaya's family and "everyone adores him."

During a press interview for his Netflix film The Kissing Booth 2, Elordi and his co-star (and ex) Joey King shared advice on how to maintain long-distance relationships. "Pick up the phone, you know? FaceTime is the greatest gift that you have in the world in a time like this," Elordi told E! News on July 25. "Don't send memes and GIFs, just give them a call." Given that Elordi is quarantined in Australia and Zendaya in Los Angeles, it wouldn't be hard to imagine the two FaceTiming. And he certainly sounds like he knows what long distance relationships are like.

In September of 2020, Elordi was spotted back in the states, but he wasn't seeing Zendaya. Instead, the actor sparked romance rumors with Kaia Gerber, and the two have continued to be spotted out and about in New York throughout the month. The two haven't confirmed their relationship (Bustle reached out in early September for comment), but a source told E! News that, while the two are just friends, "Jacob definitely has interest in dating Kaia." So, whatever is going on between Elordi and Gerber, it seems like he and Zendaya are over, at least for now.

This article was originally published on Aug. 14, 2020