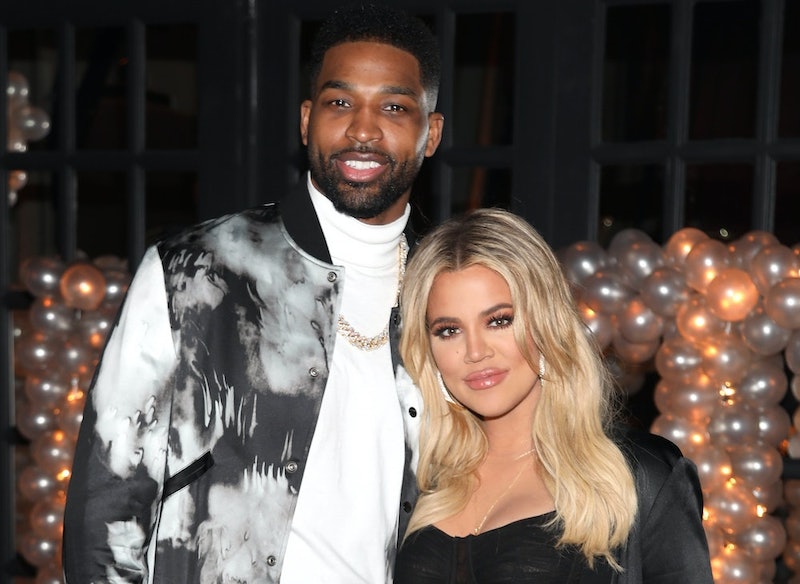 It's now the official season of engagements. Just ask Khloé Kardashian, who just might be engaged to Tristan Thompson. The reality TV star is sparking engagement rumors after she was photographed with a massive diamond ring on her finger while out and about in Boston on Tuesday, Dec. 22. Kardashian is currently in the New England town with her daughter True, 2, to help Thompson get settled, according to TMZ. The NBA athlete recently signed a contract to join the Boston Celtics.

But back to Kardashian's ring, which looks about the size of the iceberg that sank the Titanic. TMZ obtained photos of the Good American founder and her daughter bundled up in the snow-covered city — with her white diamond ring in full view. Neither Kardashian nor Thompson have confirmed an engagement, but this isn't the first time they’ve sparked speculation. The exes were thought to be engaged in July after Kardashian was similarly spotted with a diamond ring, but a source squashed the rumors at the time.

In any case, Kardashian and Thompson have been linked since 2016. The two — who welcomed daughter True together in April 2018 — have been in an on-again, off-again relationship over the past few years, mostly plagued by reports of infidelity on Thompson's part. However, whispers of a Kardashian and Thompson reconciliation surfaced over the summer, with sources confirming that the two have been quarantining together and co-parenting True amid the ongoing coronavirus pandemic.

The confirmation of their rekindled romance came in October after they were spotted kissing at sister Kim Kardashian's 40th birthday party. A source told E! News at the time that Thompson had "bent over backwards" to mend the relationship. "They are together and very happy," the source said. "She's very happy that he's around and that things have been going as well as they have."