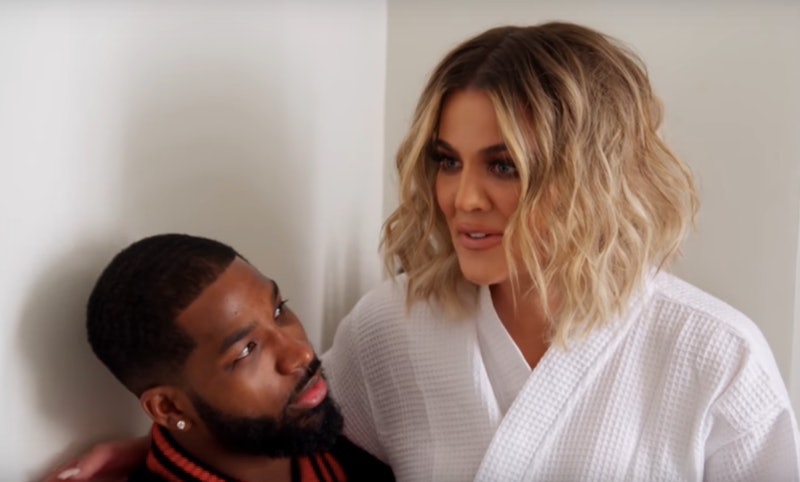 Now that the world knows Khloé Kardashian and Tristan Thompson are expecting their first child together, it only seems appropriate to look at a timeline of Kardashian and Thompson's relationship starting when they first began dating to them now starting their own family. Ever since the get-go, the Keeping Up With the Kardashians star and the NBA player seemed to have been head over heels for one another. The way they feel about each other is evident in Kardashian's pregnancy announcement. Alongside a photo of the 33-year-old Revenge Body host and Thompson's hands on her baby bump, she beautifully wrote,

"My greatest dream realized! We are having a baby! I had been waiting and wondering but God had a plan all along. He knew what He was doing. I simply had to trust in Him and be patient. I still at times can't believe that our love created life!"

She, then, of course, praised her man by writing,

The 26-year-old professional basketball player feels the same way, as you can see in Thompson's response to Kardashian's baby post. According to People, he commented on her Instagram by first writing, "My love, thank you for [allowing] me to be a part of your journey in life and allowing to share this moment with you this is something [I’ll] always cherish. Girl you look better now."

He then went onto to say,

"My love, Thank you for allowing me to be apart [sic] of your journey and entering your life that day at the bel air hotel. One of the best moments of my life." He continued, "I’m soo happy to be on this journey together with you and creating this angel from the man above. Everyday [sic] I give thanks to him for bringing us together. I love you soo much and I know our little angel feels the love we share together and will know that mommy and daddy loves them unconditional and forever and ever amen."

And with that, let's explore Kardashian and Thompson's romance.

Dating rumors first began in August 2016. According to TMZ, Kardashian and Thompson were at West Hollywood's Bootsy Bellows nightclub together. A few days later TMZ reported they were also seen hanging out together at a Beverly Hills mansion.

Over Labor Day 2016, E! News reported they spent the holiday in Cabo San Lucas, Mexico. That same month, a source told People about Kardashian and Thompson, "Khloé and Tristan have been seeing each other for a little bit. He’s a really nice, good guy and she seems very happy with him." The source added, "It’s unclear for now if it’s going to turn [into] anything super serious, but for now they’re having a good time together." In September 2016, they also made their first official appearance as a couple while attending Flo Rida's birthday party in Miami.

They made their relationship Instagram official in October 2016. As you can see above, Kardashian posted a photo of their hands and captioned it with simply a heart emoji. They also dressed up for Halloween as X-Men's Storm and Black Panther.

Her first time ever talking about Thompson publicly was with Jimmy Kimmel in November 2016. "No, I live here, but I'm there very often," she told the late-night host about visiting Cleveland a lot, since Thompson plays for the Cleveland Cavaliers.

They celebrated the 2016 holidays together — and of course wore matching furs while doing so. According to People, Kardashian also spent Christmas morning in Ohio with Thompson. She also filmed them opening up gifts and posted the videos on Snapchat.

They also had quite the New Year's Eve on Dec. 31, 2016. As People reported, they went clubbing in Miami. Kardashian also captured most of their celebration on social media for her fans.

Yes, they spent Valentine's Day together. Kardashian told Ellen DeGeneres in February, "I’ll probably cook dinner, have food waiting for him when he comes. Maybe look a little sexy." The following weekend, Us Weekly reported the couple headed to Jamaica, where they had an adventurous time, including zip-lining.

In March, Thompson made his first KUWTK appearance during the Season 13 premiere and was finally introduced to Kardashian's family. She also confirmed to Kim Kardashian that she and Thompson were most definitely a couple. That same month, Kardashian threw him a gold-themed birthday party that was pretty epic.

As the April cover star for ES Magazine, Kardashian opened up about Thompson — a lot. She revealed that she's "never been in this type of love" and that she'd absolutely accept a marriage proposal from him. Kardashian also dished, "I would love to have a family." The magazine asked, "With Thompson?" to which she replied, "We’ve talked about it. He [already] is a father, and I know for a fact that he would be an impeccable father. I definitely want to be a mom. But I don’t put the pressure on it. It’s not like, 'the clock is ticking'. I feel in my soul it will happen."

Because they love throwing parties for each other, in June, Thompson surprised Kardashian with a birthday party. She loved every minute of it, as she tweeted, "I've never had a surprise party in my life! I was blown away! Im so lucky and blessed! Thank you so much baby!!! You treat me like a queen!"

Once again, Kardashian dished about how amazing it is dating Thompson. She gushed to Mail on Sunday's You magazine (via DailyMail.com), "I’m in the best relationship I’ve ever been in and it doesn’t take a ring for me to feel that way." Kardashian added about having kids with him, "I definitely want a family, but I don’t feel any pressure. Tristan is a great dad and he definitely wants more children, but we both feel that it will happen when the time is right."

During the 10th anniversary special for KUWTK, Kardashian revealed that she and Thompson met on a blind date courtesy of basketball player Brandon Jennings. She said, "We just connected." She also called it "a serious relationship." Also in September, Us Weekly reported Kardashian was pregnant with her first child. However, at the time of the report, neither she nor Thompson confirmed or denied the pregnancy rumors.

Like their first Halloween together, the duo pulled off an amazing Game of Thrones costume. Many also started wondering if Kardashian was really pregnant, because she referred to Thompson as "daddy" in one of her snaps.

In no surprise whatsoever, they spent Thanksgiving together in November, as well. She also shared some adorable snaps of them spending the holiday as a couple.

Finally, all of this leads to their baby announcement.

Kardashian and Thompson have had quite the romance so far. Now that they're going to be parents together, they'll certainly have even more wonderful moments ahead.