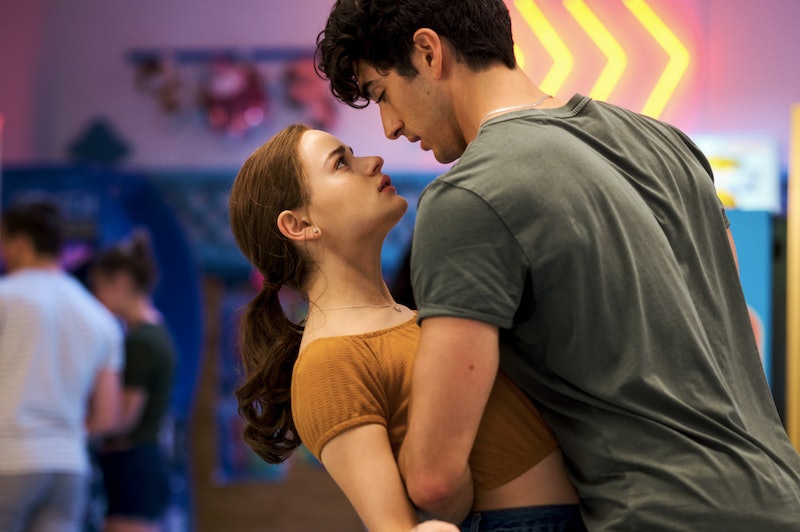 Art may be starting to imitating real life yet again. Kissing Booth 2 co-stars Joey King and Taylor Zakhar Perez — spoiler alert — may not have ended up together in the sequel, but off screen is a very different story. The duo are sparking some serious dating rumors after Perez posted a series of photos to his Instagram account on Sunday, Aug. 2, confirming that he and King were vacationing together with a group of friends. The vacation getaway took place just a few days after The Act star's 21st birthday. Bustle reached out to both King and Perez's reps about the dating rumors, but did not receive an immediate response.

The images don't outright confirm that the co-stars are an official item, though there's no denying that the two of them look awfully cozy together while posing underneath a waterfall. Perez also made a point of noting in the caption that this vacation only took place after the group underwent all of the proper COVID-19 precautions. (They all tested negative prior to the trip.) "Recalculating route. Disclaimer, we all tested negative," he wrote, referring to the coronavirus.

Along with a few adorable pics of Perez and King hanging out together, some shots also include Perez soaking up the sun along with several of his other friends who appear to be equally enjoying the summer getaway.

This adventure comes on the heels of Perez penning a heartfelt birthday message to King just a few days prior. "Honestly I could write about this woman all day," he wrote on Instagram. "She is the reason I joined the KB2 family, she welcomed me with open arms and love, she supported me, she pushed me, she made me laugh (like pee my pants laughter and had to check my underwear), she inspired me to be a better actor, she shared her family with me, THE LIST GOES ON. Grateful for you forever." King responded to the post by commenting underneath: “Can’t imagine my life without you. I heart you T.”

Speculation about a romance between the pair began in late July after the actors reunited in honor of The Kissing Booth 2's Netflix debut. And let's just say that they both appeared to be very, very happy to see each other.

"Got tested just so we could hug today," King wrote in her Instagram Stories beside an image of her wrapped in Perez's arms.

Again, none of this confirms that King and Perez are dating. In fact, it's just as possible that the two of them are simply really close friends. However, this wouldn't be the first time King's personal and professional lives would collide. She previously dated her other Kissing Booth co-star Jacob Elordi for almost two years before parting ways in November of 2018.

Meanwhile, Perez has expressed interest in taking his relationship with King to the next level in the past, telling Glamour back in July that “I’m a fan of Joey and wish that she would date me, you know what I mean?” Perhaps that dream has now finally become a reality.

More like this
'The Queen’s Gambit' Season 2 Tweet Wasn’t From Anya Taylor-Joy
By Mary Kate McGrath, Jack Irvin and Grace Wehniainen
Who Is Pete Davidson Dating? He & Chase Sui Wonders Got Caught Kissing
By Jake Viswanath
Here’s Everything Coming To & Leaving Netflix In February
By Jake Viswanath
Netflix Shut Down 'Bridgerton' S3 Rumours About A “Very Dark” Storyline
By Bustle
Get Even More From Bustle — Sign Up For The Newsletter
From hair trends to relationship advice, our daily newsletter has everything you need to sound like a person who’s on TikTok, even if you aren’t.