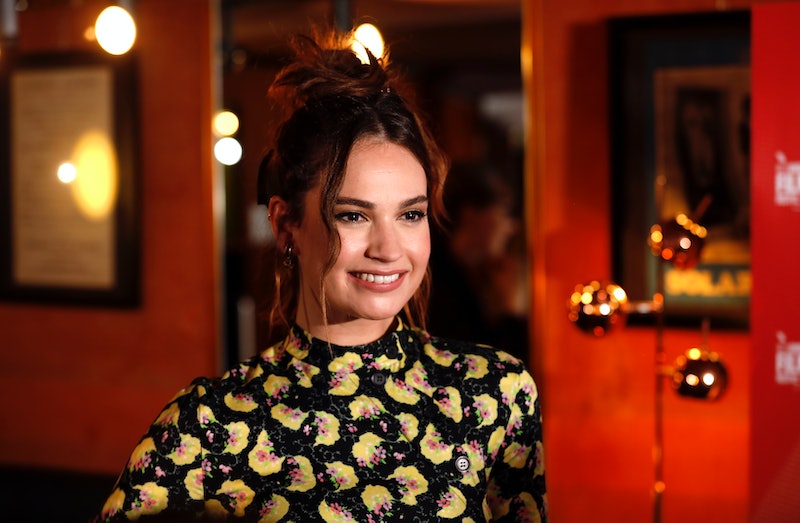 In December 2019, rumours circulated that Lily James and Matt Smith had split. Fast forward to May 2020, and the couple were pictured together for the first time in three months. Neither has commented on the status of their relationship and now talk among fans has started up again after Lily James was spotted with Chris Evans in July 2020.

First seen together outside a London club and at Evans’ hotel on July 4, James and Evans were later seen eating ice cream and having a laugh at a London park on July 8. The two may well just be close friends, but it comes as no surprise that this very cute outing has ignited a dating rumour. Bustle has reached out to reps for both actors, and I'll let you know if they come back with any comment.

As Refinery29 points out, Evans is “famously private when it comes to who he’s dating.” His relationship with comedian Jenny Slate, which ended in 2018, was the only one Evans shared publicly. So if the Mamma Mia and Captain America stars are indeed dating, they likely want to keep things on the DL.

As for why exactly Evans is in London, film site Cinema Blend notes that the star has several upcoming projects that could potentially be filming in the city following, including the actor is in talks to star in Little Shop Of Horrors — or even a project including James. However, in August the Marvel actor clarified that yes, he was in London for work but no, he wasn’t filming anything. “People are still taking meetings. We’re doing a lot of talking about work, about when work will get up and going,” he explained. We’ll just have to wait and see what Evans has in store.

More like this
Taylor Swift & Harry Styles Had A Secret Reunion At The Grammys
By Shahed Ezaydi
Jennifer Lopez & Ben Affleck’s Officiant Spilled The Tea On Their Wedding
By Sophie McEvoy
Maya Jama’s Net Worth Definitely Won’t Give You The Ick
By Sophie McEvoy
Twitter Is Saying The Same Thing About Beyoncé's Renaissance World Tour
By Shahed Ezaydi
Get Even More From Bustle — Sign Up For The Newsletter
From hair trends to relationship advice, our daily newsletter has everything you need to sound like a person who’s on TikTok, even if you aren’t.

This article was originally published on July 9, 2020