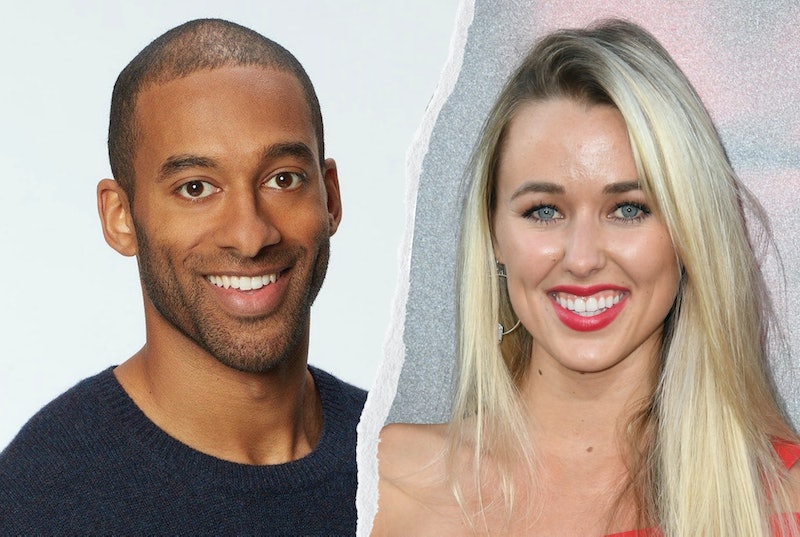 If you thought things were cut-and-dry over between Matt James and Heather Martin when she rolled away from The Bachelor in her white minivan, you might want to reconsider. After the finale, there were rumors circulating on the internet that Matt didn’t end up with one of his final three contestants — Michelle Young, Bri Springs, or Rachel Kirkconnell — and was instead dating Heather, Hannah Brown's friend who interrupted halfway through the season in hopes of finding love with the 29-year-old commercial real estate broker.

While this might sound far-fetched considering Matt didn't think twice about sending Heather home soon after her arrival, the people of the internet managed to dig up some pretty compelling evidence. For example, despite getting no screen time on this week's Women Tell All special, fans discovered that the 24-year-old influencer was actually sitting right next to Kit. "WAIT. That's the back of Heather's head LMAO," one fan wrote on Twitter. "I didn't even realize she was there." "Am I the only one that sees Heather Martin sitting next to Kit?" someone else tweeted.

So, what does Heather being at the tell-all have to do with her current relationship status and whether or not she's dating Matt? Well, nothing. However, fans did find it interesting that production went out of its way to cut her out of nearly every frame. Regardless, fans discovered even more proof that seems to support this dating theory, which was summarized perfectly in a TikTok posted by @morganptalks.

According to the TikTok, Matt recently posted a photo on his Stories and tagged his location as San Clemente, California. Funny enough, Heather did the same when she shared a video of herself eating in the car. Of course, fans couldn't help but wonder why the two would be hanging out in the same city — especially when diehard fans of the reality series know that Matt lives in New York.

The evidence that Matt and Heather might be together post-show continued to stack up. On March 4, the reality star posted a photo on his Instagram feed of him and Bri captioned, "Robe SZN." It didn't take long for internet sleuths to realize that Heather recently shared of photo of herself wearing a robe on her Instagram Story. In other words, these two are either dropping hints that they're together or they both just love robes.

On April 6, however, Heather went on The Ben and Ashley I Almost Famous Podcast to set the record straight regarding the relationship rumors, swiftly denying them and adding that the two haven’t spoken since filming the show. “I think he has a lot going on in his life,” she said. “He’s going through a ton. I can’t even imagine.” As for why she was absent from the “Women Tell All” special, she gave an ominous comment: “I don’t know what I’m allowed to say these days.”

Her comments come just two weeks after Matt said he’s done with the Bachelor franchise following Rachael Kirkconnell’s racism scandal and Chris Harrison’s subsequent break from the show. “I’m not going to be dating,” he said of his after-show plans, noting that he’d “never” join another season. “I’m solely focused on getting back to that meaningful work in the community and centering myself around projects that are going to elevate all the work I’ve been doing in the city, special interest things that I appreciate outside reality television.”

Sorry to all the Bachelor fans who were rooting for the rumored couple — it seems Matt’s soulmate is still out there somewhere.

More like this
You’ll Most Definitely Recognise Kyle Pryor’s Soap Star Girlfriend
By Sophie McEvoy
Yes, That Is Victoria & Another ‘BiP’ Alum In Zach’s ‘Bachelor’ Trailer
By Kadin Burnett and Grace Wehniainen
Why Wasn't Teddi At The 'Bachelor In Paradise' Reunion?
By Brad Witter
Is Blake Lively Or Penn Badgley The Richest 'Gossip Girl' Star From The OG Series?
By Hugh McIntyre
Get Even More From Bustle — Sign Up For The Newsletter

This article was originally published on March 5, 2021