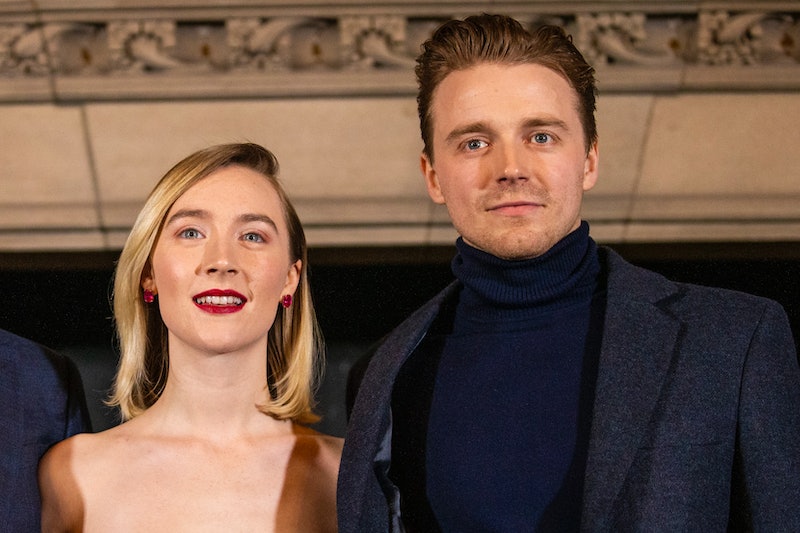 Meeting up during the pandemic hasn’t exactly been an easy feat, but Mary Queen of Scots co-stars Saorise Ronan and Jack Lowden seem to have worked their way around it. Seen strolling through Notting Hill together (and cuddling in the park) over the weekend, it looks like there’s a pretty big chance that yes, they might be dating.

As reported by the Daily Mail, Ronan and Lowden were seen near her West London flat where they “took time to relax in a park before sitting down outside a Notting Hill bakery.” They were also seen at a local Glasgow pub — The Laurieston — earlier this year celebrating Mary Queen of Scots’ UK opening weekend, per the Scottish Sun. Bustle has reached out to the two actors’ representatives for comment regarding the speculation, but have yet to receive a response.

Ronan and Lowden could very well just be two friends hanging out and frankly, either way, it's not really any of our business. Nevertheless, rumours of a relationship have been circulating since December 2019 when Ronan and Lowden were seen together at an afterparty for the movie in New York, according to Page Six. "We don't know when they got together, we only found out on Tuesday night when they rolled up together — but they seem very happy and sweet," a source told the publication.

While the two may not have publicly spoken about their alleged relationship, they have mentioned one another in different contexts. In an interview with Refinery29, Ronan explained the intricacies of filming her sex scenes with Lowden, and explained how it was choreographed. "Jack and I are very comfortable with each other. We looked after each other," she told the site. "I don't think he'd ever done anything like that before either. It was new territory for both of us."

And during the press circuit for Dunkirk, Lowden was asked whether he was excited to work with Ronan on Queen of Scots, to which he replied: "I am really excited, she's lovely [and] great, I can't wait for that it's gonna be fun." An in response to whether he'd be coaching her on her Scottish accent for the role — as he's, y'know, Scottish — he said he wouldn't, as "she'd probably smack [me] in the face." OMG, Lowden.

It was previously reported by The Sun that Ronan was linked with Lowden's younger brother Calum, who is part of the Royal Swedish Ballet. Calum was seen with Ronan at the 2018 BAFTAs. "It's early days and they have been keeping things low-key, but there was no mistaking the spark between them," a source told the newspaper. However, Evoke suggested that Ronan could very well have been dating Jack, as opposed to Calum, back in February. But until Ronan or either of the Lowdens comment on the rumours, they'll remain, well, rumours.

Whether Ronan and Lowden are in a relationship or not, it's safe to say that they have a pretty awesome bond after Mary, Queen of Scots and I hope they'll be acting opposite one another in future projects, too.

This article was originally published on Jan. 31, 2019