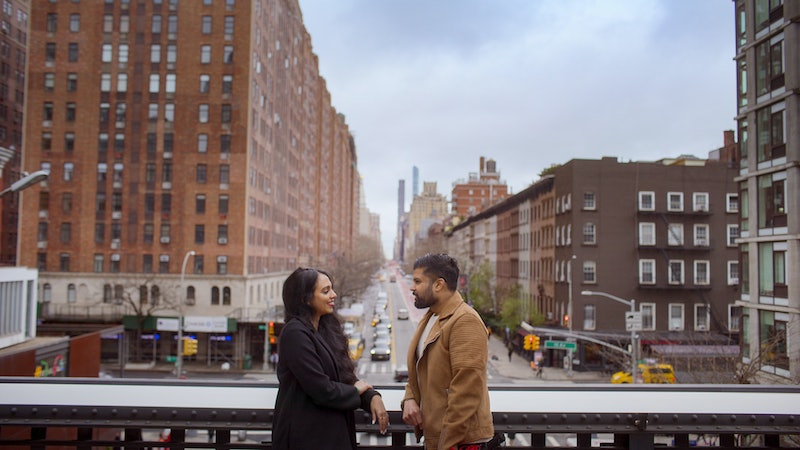 If you just finished binging Season 2 of the Netflix reality series Indian Matchmaking, you might be wondering if any of the couples that matchmaker Sima Taparia brought together are still going strong. Viral Joshi, one of Sima’s new clients based in North Carolina, had a long list of criteria for her matches. She wanted someone self-made, who wouldn’t be intimidated by her successes, and someone from Gujarat who could speak the same language as her family.

After Sima Aunty set Viral up on a failed date (with a boy also named Viral, whom she took to a furniture store as the first date), she was then matched with Aashay Shah, a New York City-based Gujarati doctor who came to the U.S. at age 12. Their connection seemed immediate; where Viral had lacked chemistry with the other Viral, she felt those things with Aashay within moments of him coming to her North Carolina home. It helps that he also checked off all of the major boxes on her list.

Their first date was to a rock climbing gym, where Aashay showed off a shoulder tattoo and his advanced climbing skills. Viral then visited him in New York City near the end of the season, where she grew irritable over his tardiness during their coffee date. But she quickly forgave him as they walked along the city’s High Line. By the Season 2 finale, it seemed like things were boding well for the couple. So, did Sima Aunty make a successful match between Viral and Aashay? Thankfully, their Instagram profiles offer some clues about their current relationship status.

While it’s not exactly known when the second season was filmed, it’s likely that production occurred at some point in late 2021 or early 2022. Since then, Viral has posted a few different photos of herself in the Big Apple — from a cute rooftop photo in Williamsburg on April 25 to a posed photo opp in front of the Statue of Liberty on June 4. She could very well be visiting the city multiple times in a few months just for fun, but perhaps she’s going there to see someone special.

When you compare her profile to Aashay’s, you’ll notice some similarities. He also posted a photo from the same Williamsburg rooftop bar Westlight ten days after Viral’s post. The photos are from the same angle, suggesting they might have took turns snapping pictures of each other with the city’s skyline in the background for the ‘gram. To date, Aashay has not tagged any photos with North Carolina locations.

Neither Viral nor Aashay has posted publicly about their relationship status; they haven’t even shared photos of each other. But they’re following each other on social media and have openly “liked” each other’s Instagram posts. Viral liked Aashay’s recent solo traveling post from July 27, while Aashay returned the favor when she posted about an India trip on July 5. (Also, of note, he tagged his post at LaGuardia Airport while she tagged JFK International Airport.) Though it’s unlikely these staggered posts suggest a clandestine romantic getaway, it bodes well for their future that they have these overlapping interests.

More like this
Here’s When You Can Expect More ‘Indian Matchmaking’
By Brad Witter
‘The Ultimatum: Queer Love’ Is Officially On The Way
By Radhika Menon and Kadin Burnett
Netflix's 'Bling Empire' Season 3 Trailer Includes A 'Selling Sunset' Cameo
By Kadin Burnett and Sam Ramsden
Kyle & Deepti Finally Revealed Their Relationship Status Post-'After The Altar'
By Grace Wehniainen
Get Even More From Bustle — Sign Up For The Newsletter