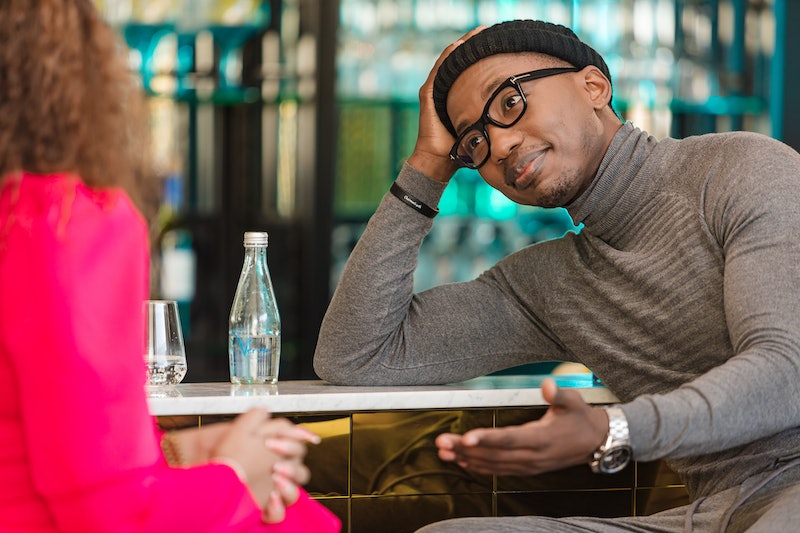 If you’ve already sped through Young, Famous & African, Netflix’s latest (and most lavish) reality series, there’s a good chance you might have fallen in love with Andile Ncube. The TV presenter had a budding flirtationship with entrepreneur Zari Hassan during the show — but things got a little complicated. Zari shares children with her ex (and Andile’s friend) Diamond Platnumz, and throughout the show, Andile worried that there might be lingering feelings in the co-parents’ relationship... not to say that’d be a dealbreaker, necessarily. “If there’s two, there can be three,” Andile says at one point. “Polyandry’s a thing now, I hear.”

After Andile’s feelings boil over during the season finale, he goes to Zari’s house to share them — only to be surprised that she’s hanging out with Diamond, who surprised her after missing the Idibias’ vow renewal. In a private moment, Andile admits to Diamond that he’s been talking to Zari and that “there’s been a little interest there.” And Diamond doesn’t love the confession. “Brother, but this is my family,” he says before the credits roll on the massive cliffhanger. The implication is that Diamond is trying to restore things with Zari. So, it’s pretty natural to wonder if Zari and Andile are dating after Young, Famous & African. Or is Zari back together with Diamond?

The answer seems to be no... and no. While it may be sad to see Zari and Andile not pursue things further, Zari (aka The Boss Lady) doesn’t appear to be in a relationship with Diamond, either, if that makes things any better. That’s true to what we know about Zari, of course — earlier in the season, she said she “[wants Diamond] to find someone and grow with that person” and is “not holding him — he’s attaching himself.”

So, who is she dating? As The Cinemaholic points out, Zari is reportedly in a relationship with a fellow entrepreneur named GK Choppa, and they’re pretty active on Instagram.

In one post, GK Choppa even refers to Zari as his “wife” — and she commented, “My King❤️” right back.

Based on Instagram, Zari and GK Choppa seem to have been dating since at least late January. As for Andile, it’s unclear if he’s dating anyone — but he definitely still has a soft spot for Zari.

Andile recently posted a photo of the pair embracing and has been reposting praise for him and Zari — including a request that they please get married — to his Instagram Story.

It’s unclear if Netflix will renew Young, Famous & African for Season 2, but if they do, viewers will likely get to see how that love triangle plays out before Zari eventually moves on to GK Choppa.

More like this
Everything We Know About Chèrie & Jessey’s Abrupt Exit From Bling Empire
By Alyssa Lapid
G Flip Shared How They Got Romantic With Chrishell Stause & Discussed Babies
By Brad Witter
Christine Quinn Says She & This Co-Star Got Paid The Most For 'Selling Sunset'
By Grace Wehniainen
When Was 'Bling Empire' Season 2 Filmed?
By Alyssa Lapid
Get Even More From Bustle — Sign Up For The Newsletter