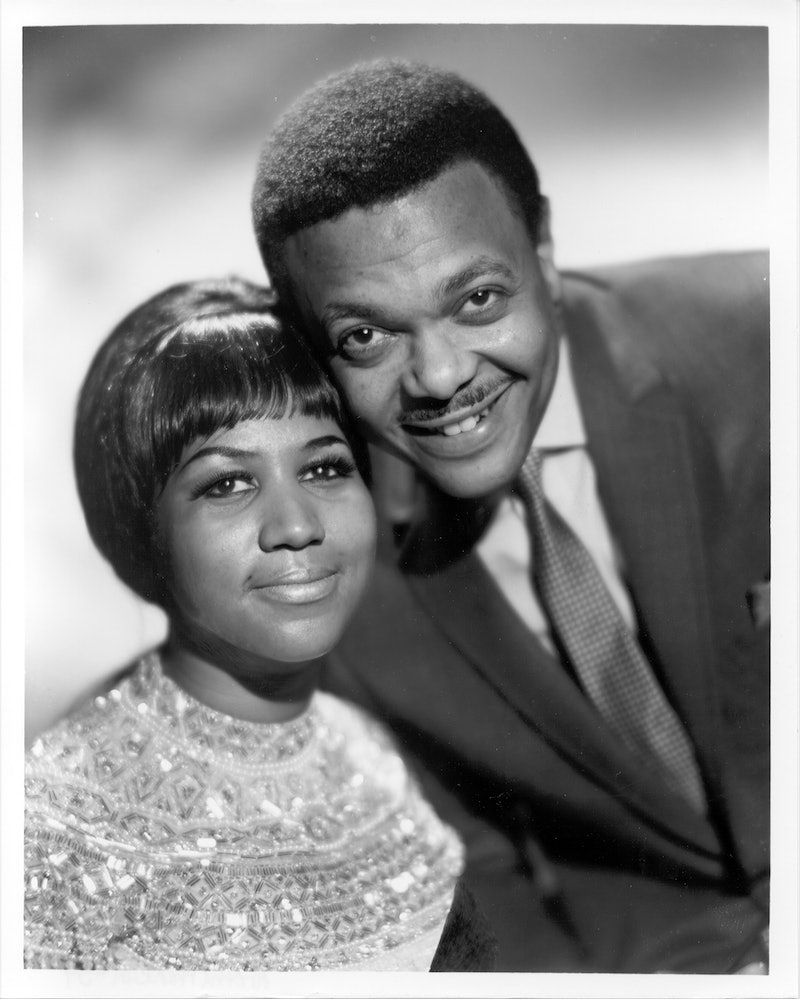 The new Aretha Franklin biopic Respect, which stars Jennifer Hudson as the Queen of Soul, covers a myriad of important events in the singer-songwriter’s life — including her romantic relationships. The film depicts her first marriage to Ted White (Marlon Wayans), who was also her manager for a time, and her relationship with Ken Cunningham (Albert Jones), whom she never married but had a child with.

White and Cunningham weren’t Franklin’s only partners, however: Franklin had several relationships that had an impact on her, including a decades-long romance with a man who was known as her “forever friend.” Still, Franklin rarely spoke about her relationship status or personal life, so the details of her marriages and relationships are few and far between. Below, what we do know about Franklin’s marriages and longtime loves.

Franklin and White married in 1961 — when she was 19 and he was reportedly 30 — after a few months of dating. White became her manager, and has writing and cowriting credits on several of Franklin’s songs, including “(Sweet Sweet Baby) Since You've Been Gone.” They separated in 1968 and divorced in 1969.

They had one child, Ted White Jr., who would perform with Franklin under the stage name “Teddy Richards.” He was her third child (she had two sons from a childhood relationship).

White was abusive to Franklin, subjecting her to “ugly physical fights” that left her with “visible bruises.” In 1968, a friend told Time, “I don’t think she’s happy. Somebody else is making her sing the blues.” In the same article, White was described as “a former dabbler in Detroit real estate and a street-corner wheeler-dealer.”

Franklin didn’t discuss the relationship publicly, but fans have theorized that Franklin’s song “I Never Loved a Man The Way I Loved You” was about White, particularly the lyrics “You’re no good, heartbreaker / You’re a liar and you’re a cheat / I don’t know why I let you do these things to me / My friends keep telling me that you ain’t no good / But oh, they don’t know that I’d leave you if I could ... I ain’t never loved a man the way that I love you.”

Franklin met Turman, an actor, at a benefit in 1977; the following year, they were married at her father’s church. Turman had three children from a previous marriage, and Franklin became their stepmother.

Franklin’s sister Erma told David Ritz, the author of the biography Respect: The Life of Aretha Franklin, that the relationship “was billed as the perfect Hollywood relationship. A handsome, dashing, and successful actor marries a beautiful, glamorous, and successful singer.” Erma added, “After her fairy tale wedding and her enormous effort to paint a perfect picture in all the magazines, the end of this relationship was especially painful.”

Franklin and Turman, who had no children together, separated in 1982 and divorced in 1984. But, Turman says the two remained friends, and would speak on the phone from time to time. “People think of her often as an iconic singer, an iconic performer, but they don’t necessarily remember that she was a mother and a wife and someone’s lover,” he said. “There was that part that I’m glad I got to know about.”

Turman remarried but Franklin did not. The actor called Franklin “a love of my life” and visited her before she died in 2018.

Franklin had other relationships that played a critical role in her life.

The father of Franklin’s first two sons — who were born when she was 12 and 14 — was reportedly Edward Jordan Sr., according to a handwritten will found after Franklin’s death. Sources called him a “player” and she wrote that he “never made any contribution” to her sons’ welfare.

Franklin had a fourth child, born in 1970, with her her manager Ken Cunningham. Franklin and Cunningham lived together but reportedly never married because of Franklin’s contentious split with White and her hesitance to get married again. “He helped Aretha get it together. He helped her stop drinking,” Brenda Franklin-Corbett, Franklin’s cousin and backup singer, told Ritz. “That was a huge blessing. Ken was also serious-minded about art and books and he loved all kinds of music. He came along at just the right time. Aretha needed a man who could point her in a positive direction.”

Franklin also had a 30-year romance with Willie Wilkerson, a former firefighter who met the singer in the 1980s. They occasionally opened up about their relationship, and Franklin called them a “fiery match.” The two confirmed an engagement in 2012, but called it off a few weeks later. “Regretfully, To Our Friends and Supporters: Will and I have decided we were moving a little too fast, and there were a number of things that had not been thought through thoroughly,” she said. “There will be no wedding at this time.”

Franklin’s “forever friend” died of COVID-19 in 2020. At the time of his passing, Wilkerson’s daughter said, “She was a very large part of his life ... They loved each other. They were like best friends. They called each other sweetie. She called him all the time. There’s nothing he wouldn't do for her. They had a special relationship.”