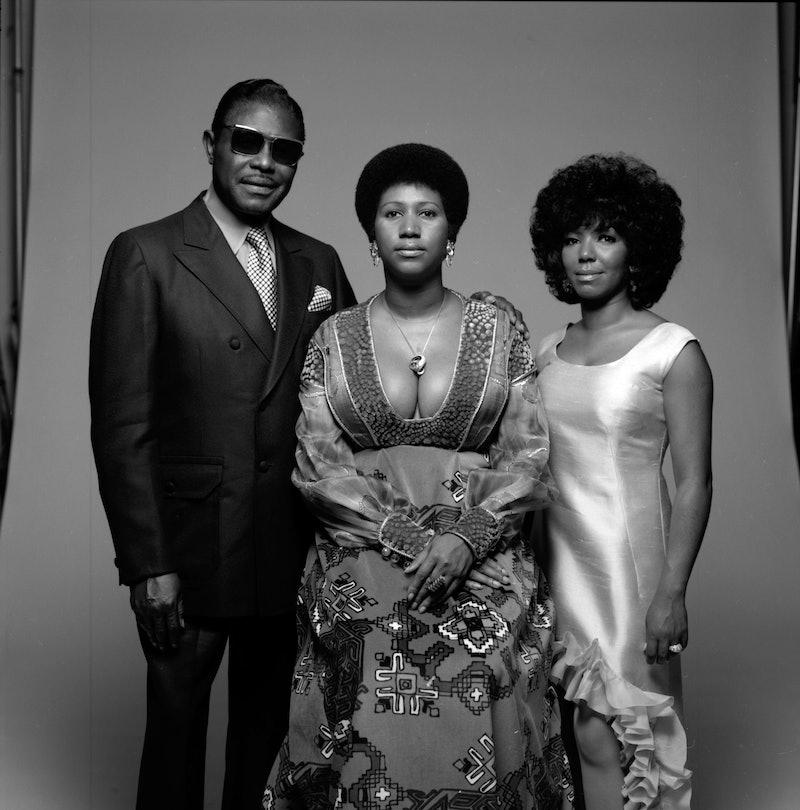 With the biopic Respect now in theaters, fans have become reacquainted with Aretha Franklin’s family. As depicted in the film, though Aretha’s father and some of her siblings were primarily based in Detroit, Michigan, her family members often joined her in recording studios and on tour across the country. While her siblings never achieved the same success that she did, some went on to have long careers; their father, Reverend C.L. Franklin, encouraged their musical endeavors. Franklin’s entire family also supported her both personally and professionally, standing by her as she achieved worldwide fame while raising children and going through two divorces. So who were the most important family members in Aretha’s life?

Franklin’s father was the man with the “million-dollar voice” — a very popular preacher and singer who was known for organizing the 1963 Walk to Freedom in Detroit with Martin Luther King, Jr. He was the first preacher to join the gospel tour in 1953, and he formed his own group, C.L. Franklin’s Gospel Caravan, that Aretha sometimes sang in. He recorded dozens of his sermons and made a reported $4,000 per appearance. At home in Detroit, he hosted noted singers and musicians for “jam sessions.”

In June 1946, he became pastor of New Bethel Baptist Church, but before that he was a pastor in Memphis, Tennessee. While there, he had a child with a 12-year-old member of his congregation when he was 25. He was not punished for his actions, while Mildred Jennings, the 12-year-old, was separated from her baby and sent to live with relatives. Carl Ellan Kelley, the child, was raised by her grandmother and died in 2019. Aretha Franklin would bequeath her half-sister $50,000 in one of her drafted wills.

In 1979, C.L. was shot in his home during an attempted robbery at his Detroit home. He went into a coma and died five years later, in 1984.

Aretha’s mother was a piano player and singer who inspired her daughter. She married C.L. in 1936; she had a son, Vaughn, from a previous relationship, whom C.L. adopted (Vaughn didn’t learn C.L. wasn’t his biological father until 1951). The couple had a contentious relationship, and Barbara eventually grew weary of her husband’s infidelity and moved to New York in 1948, although the two never officially divorced. A major TIME article once incorrectly stated that Barbara abandoned the family, but Aretha and other family members often corrected this falsehood.

She died of a heart attack in 1952, at the age of 34. Franklin was still young at the time. In her autobiography, the singer wrote of losing her mother: “I cannot describe the pain, nor will I try.”

The oldest child of C.L. and Barbara, Erma began singing at the age of five and, alongside her other siblings, sang in her father’s gospel choir. Erma sometimes performed background vocals on Aretha’s songs, but she was also a singer-songwriter in her own right who had several brushes with success. She and Aretha performed together in the 1980s and 90s.

Erma married young and had her first child (one of two) at age 16. She was also part of the extended family that helped care for Aretha’s children. In David Ritz’s 2015 biography, Respect: The Life of Aretha Franklin, Erma said, “It was understood that our babies would be welcomed into the world and cared for with limitless love. It was also understood that our future as women — our education and our career — would not be compromised because of these early births.” She added, “Daddy recognized our ambition as a psychological force we had inherited from him. He did everything in his power to encourage that ambition. He did not see his daughters as housewives. He saw us as stars, and that’s how we saw ourselves.”

Erma eventually became a pop singer and lived in New York City. She finally received recognition for her recording of “Piece of My Heart” when Levi’s used it for a commercial. She died in 2002 of lung cancer.

Cecil, Aretha’s older brother, served at the same church as their father, New Bethel Baptist Church. Before that, he graduated as valedictorian from Morehouse College and worked as an assistant pastor for three years.

After Franklin finalized her divorced from her first husband, Ted White (who was also her manager), Cecil stopped his work at the church and became her manager. Not much else is known about him, except that he died in 1989 of a heart attack. Franklin paid tribute to him and her father in a memorial service at their church in 2015.

The youngest of the four siblings was also a talented musician in her own right, even writing “Ain’t No Way,” which Franklin would later sing. Like Erma, Carolyn was also a singer who contributed background vocals to Aretha’s tracks, but didn’t achieve the same level of success despite her significant talents.

Both Erma and Carolyn contributed to Franklin’s reworking of “Respect,” and Carolyn wrote “Baby, Baby, Baby” and “Ain’t Nobody (Gonna Turn Me Around),” and contributed vocals to “Baby I Love You,” “(You Make Me Feel Like) A Natural Woman,” and “Day Dreaming.” Carolyn was attracted to women, and fans have speculated that some her songs were about LGBTQ+ love — but that hasn’t been verified.

Despite making several albums, she never achieved solo success. “People won’t let me out of [Aretha’s] shadow and I think that’s wrong,” she once said in an interview. Carolyn worked on a variety of musical projects, and even considered acting before she decided to move back to Detroit after her father was shot. She enrolled in law school to become an entertainment lawyer, but sadly, she died of breast cancer in 1989 — the same year as Cecil — before she could realize that goal.

More like this
Everything You Need To Know About ‘Black Panther: Wakanda Forever’
By Bustle Editors
Christian Bale Sang With Taylor Swift & His Daughter Can't Believe It
By Radhika Menon
Snoop Dogg & Michelle Pfeiffer Lead Moving Tributes To Coolio
By El Hunt
Harry Styles’ Red Carpet Looks Have One Thing In Common
By El Hunt
Get Even More From Bustle — Sign Up For The Newsletter